Aching for the Arctic

Sweltering in the September humidity of a Kathmandu traffic jam, I ache for the crack of calving glaciers 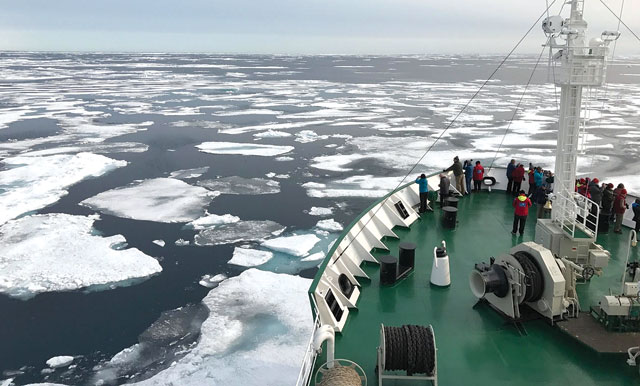 Kneeling on the tarmac at the foot of the aircraft steps, the immigration officer stamps our passports. “Welcome to Greenland!” he beams.

When his back tires, he transfers his official activity to the mudguard of a yellow school bus that will drive us the short distance to the dock where the ship awaits at the head of the world’s longest fjord, Sondre Stromfjord. A tractor delivers our bags in a red Royal Arctic shipping container.

A row of bulky figures are silhouetted against a blue sky on the ridge behind us — local Inuit people being entertained as the zodiac boat shuttles 77 of us from the floating jetty to the chunky research vessel anchored in the bay. And some of us are pretty entertaining, incongruously dressed in navy blazers, tweed caps and corduroys of our British shores — soon to be replaced by down jackets, woolly hats and long underwear.

This is the start of a two-week journey through the towering scenery, desolate islands and floating ice of the fabled North West Passage in the high Canadian Arctic.

Aboard the ice-strengthened 100m Russian ship Akademic Ioffe, escorted by my balding brother Nick and his cheerful wife Iris, our select Ultimate Travel passengers have the benefit of attentive staff from Kalingrad and the limitless knowledge of teams of expert guides and photographers from the US, UK and Canada — specialists in whales, seals, birds, polar bears, Arctic explorers and Inuit history.

The first three days in west Greenland are as fresh to our guides as to us: visits to remote harbours of multi-coloured houses and unpronounceable names – Kangerlussuaq, Sisimiut and Iluissat, where the world heritage site Jacobshavn Icefjord disgorges massive blue green icebergs into the Disko Bay. A burly paddler demonstrates local survival skills in this toughest of environments with ‘eskimo rolls’ in a slender canoe. Local fishermen in tracksuits pile dead seals on their gunwales and heap spotted wolf fish into buckets. Chained sled dogs lie comatose in the sun, enjoying the summer respite from their indispensable winter work on the snow.

Having crossed the Davis Strait, at the settlement of Pond Inlet we enter Nunavut Canada, amidst barren black mountains streaked with old snow and hanging glaciers. A traditional welcome includes throat singing, blubber lamps and a demonstration of hunting techniques by our Inuit hosts, dressed in sealskin and natty white polar bear skin trousers in a smart new school insulated from the cold. “What do you do during the winter dark?” someone asked a shy teenager. “Go to Ottawa!” she smiled wryly.

The landscape is huge and harsh, and we sail on deeper within the Arctic Circle, past the largest uninhabited island in the world, soaring sea cliffs jostling with nesting gulls, and the northern-most tip of the North American continent in Bellot Strait. During the brief summer months the sun never sets, and a bright white arctic hare is starkly conspicuous on the snowless hillside. 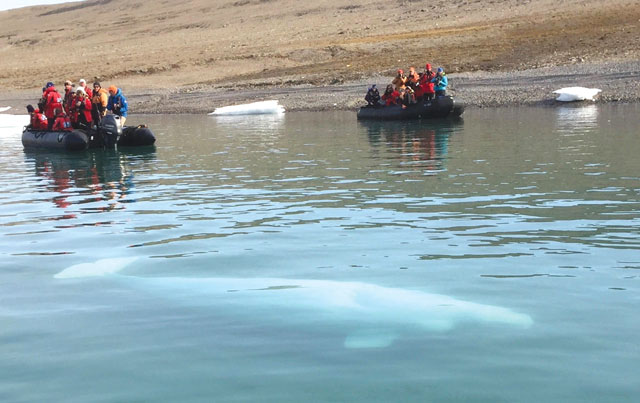 The ship glides silently through the ice, stalking polar bears: a yellow head swimming or a creamy heap resting on the ice, separating out into a family of mother with cubs. As adept in the water as on land, one lone maritime male carries a full coatful as he bolts in alarm straight uphill from the gravel beach, leaving a dark wet trail in his wake. One evening,vodka tonic in hand, I watched from the bar as a bear on ice floated past,unconcerned, just a few feet from the ship.

Several times a day we don layers of warm clothes culminating in clumsy colourful outer gear, and pile into the rubber zodiacs for excursions on land, ice and sea: hikes through the untrodden tundra, ancient Thule rock mounds and crumbling historic huts. We salute the weather-worn graves of Franklin’s tragic expedition on the bleak gravel of Beechy Island with tots of rum and misty eyes, before being hurried back to the boats by our rifle-toting guides in a frisson of fear at an advancing polar bear.

Through binoculars on deck we spot grazing muskox “dots”, and several species of seals and whales. One morning, pale Belugas circle right beneath our boats, blowing with curiosity, ghostlike just under the surface. A startlingly white gyrfalcon guards her nest on a naked rock tower, loons wail on glassy seasonal lakes, rasping black ravens rule the beaches, and myriads of guillemots, skuas and eiders skid through the grey waves.

It is a heavy ice year within the North West Passage, despite the ice cap generally falling to well below average, and the Canadian coastguard will not risk us proceeding to Cambridge Bay. The aloof Russian captain with a large aquiline nose changes course, and we leave the ship to fly out of Resolute, another name that resonates with history. The US president’s Oval Office desk is made from the timbers of the trapped British ship HMS Resolute. Chartered flights from Resolute’s edge-of-the-world airstrip pick up North Pole expeditioners, for a price, but we fly south four hours to the closest Canadian city of Edmonton.

“More people climb Everest than visit the Northwest Passage every year – less than 400,” we are told, rather inaccurately, by the terse Australian tour director. This may change with the impending arrival of a serious cruise ship, the Crystal Serendipity, which carries 1,700 captive passengers escorted by her own personal icebreaker. Along with a few hardy sailing yachts waiting in vain for the ice to retreat, this red icebreaker was one of the very few other vessels we saw on our entire trip.

Sweltering in the September humidity of a Kathmandu traffic jam, I ache for the haunting sound of ice floes against the hull, the hiss of a whale’s blow, the crack of calving glaciers, and the forlorn cries of gulls. But the high Arctic is not another galaxy or distant dream, but intrinsic to the third pole in whose shadow we live, part of our daily Himalayan reality of changing climates, receding glaciers and man-made threats to the natural order.