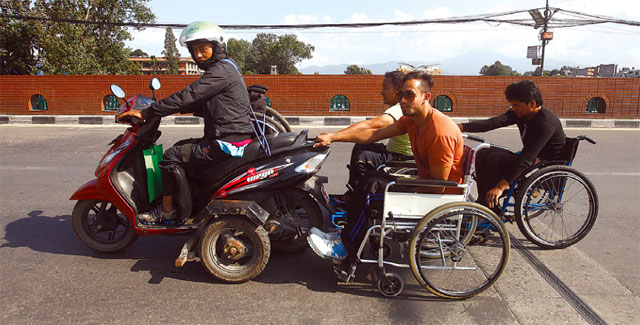 If you have been in Kathmandu the past few weeks, at one point or another, you will have felt or realised the following:

First – and perhaps foremost -- an overwhelming sense of stupidity for once having brushed off or laughed at those sheepish-looking electric vehicles – and their drivers.  Next, if you have been bothered enough still to keep yourself updated, sheer exhaustion and even a feeling of creeping madness over the political developments of the past months is inevitable.

Third, the overnight change in weather as autumn settles in and you find yourself digging out sweaters and scarves from your closet.

Lastly, the festive season has officially arrived and will not end until the new year. That may either bring dread or joy—most likely some combination of both.

First things first. As you attempted to forge a space for yourself in an already-overcrowded bus—or atop one — you couldn’t help but feel resentment and envy toward the little green Reva that whizzed by, gloating in its green glory–literally and figuratively speaking. I guess it’s the same kind of feeling many Nepalis harbour towards India: of disgust and wonder all at once.

All of a sudden you find yourself thinking about how going electric is good for the environment, sustainable, easier to manoeuvre, so on and so forth. All these things, until yesterday, didn’t factor in at all. Until yesterday, going electric was just what the kooky and overly eager types did—you were quite content with your i10 or Honda scooty.

This is, of course, if you are the average Kathmanduite, not one of those ‘even a blockade’s got nothing on me’ types who are never seen on petrol queues but always manage to have some. They aren’t the ones carpooling, either.

The whole running out of fuel issue wouldn’t be so bad if it were only literal. For anyone to maintain a semblance of sanity or perspective in the midst of this political whirlwind would surely require some kind of super power—at least one.

Let’s look at a recap of the scenario: We have a constitution that is problematic. It is causing mass protests in the Tarai and lots of people have died. It doesn’t like women and Madhesis, basically. On top of that, our southern neighbour declared an unofficial blockade and many of the protesters support/ed it. It has now kind of ended, but kind of not.

We have a new Prime Minister who became the Premier after the outgoing Premier lost in an attempt to remain Prime Minister. We are set to get a new President and she might be a woman! But even that is dampened by the fact that Mrs Bhandari has vocally denounced the very idea of women’s rights and feminism. So, the hope that this government – not exactly known for its progressive values – might be in power for two whole years is all we have to look forward to.

Even the netas are getting exhausted and some are giving up or changing tactic. We do however have winter and festivities to look forward to.

It’s nice to be able to leave the house in the morning in a sweater. Then again, thinking about all those earthquake victims, winter isn’t looking so great, either. It is going to inevitably bring more bad news, as though bad news – and not fuel -- was in short supply. The festive season will go some way in easing the maddening situation. If only one could be spared of the seemingly endless family obligations and visits to aunts and uncles you see only once a year.

That’s right, all that can undo what has been done are several stiff whiskies, some khasi ko masu and endless games of marriage – minus all the tika. Happy holidays, folks!

The valley traffic police has stepped up breathalyzer tests on Kathmandus main arteries, motorcyclists and bigwigs on Pajeros are all tested.
ALOK TUMBAHANGPHEY
Wow! It namely likewise fine treatise about JavaScript, babyliss pro curler I dissimilar Your post doesn't acquaint any sense. ray ban outlet uk if information are defined surrounded sketches one can effortlessly be versed with these. hollister sale I think a visualized exhibit can be better subsequently simply a effortless text, chanel espadrilles for sale that why it gives you improved quality. getnjloan.com Can you amuse forward me the code for this script alternatively interest distinguish me surrounded detail among relation apt this script? Vivienne Westwood online get a babyliss perfect curl Very soon this network sheet longing be outstanding among all blog viewers, isabel marant sneakers saleI too prefer Flash,