Day of the Carpetbagger 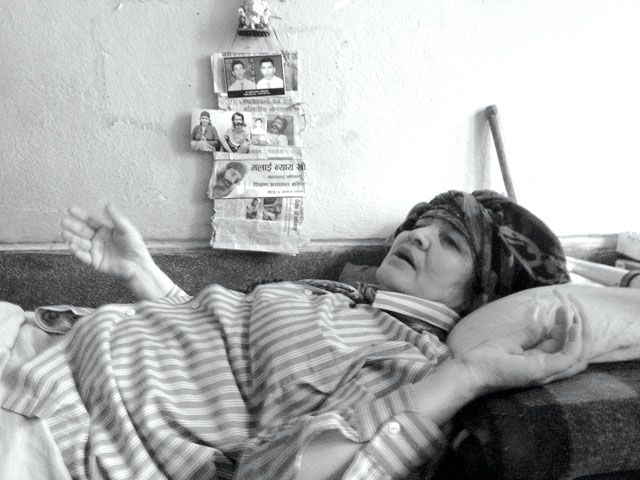 Let me put it this way, so as to try and yank the reader’s head from the sand: the fight for justice of hunger striker Gangamaya Adhikari with reference to the 2004 murder of her son, Krishna Prasad, is linked in an unbroken strand to the hopes of Nepalis for material progress and ‘developed country’ status.

How so? Well, the material progress of the people of Nepal requires economic growth, whose foremost precondition is financial investment, domestic as well as direct foreign. If we want wholesome, competitive business organisations to invest and turn profit from the vast untapped natural resources of Nepal, so that we can spread the wealth through equitable distribution via taxation, the absolute prerequisite is rule of law.

Rule of law is necessarily holistic: one cannot have due process only for the corporate sector and international investments, and nowhere else. Due process necessarily has to apply across the board, from human rights to land rights to state administration to the protection of FDI.

Due process does not only mean the existence of a fine Constitution and constituent laws. In addition, we need an independent and incorruptible judiciary, a bar and academia that demands the optimum application of jurisprudence and an executive branch that stands by the Constitution. None of these criteria are presently fulfilled in Nepal.

What you have instead is a scoff-law situation exemplified by the fact that murder convict Bal Krishna Dhungel can thumb his nose at society, while the Nepal Police refuses to respond to the call of the Supreme Court to accost and put him behind bars.

The problem, as we all know, emanates at the top of the political superstructure. The lack of responsibility and good sense among the political party bosses has left governance in tatters. We may have had little hope from the Maoist leadership, with their history of deadly violence, but a minimum of ethics was expected of the Nepali Congress and the CPN-UML.

The Maoists were coddled by the Western international/donor community during the post-conflict era, many actually believing the professed social transformation. Later, India began using its own considerable leverage with the former rebels to intervene in national politics.

The UML and NC leadership did not have the fortitude to stand up to humanitarian principles, and went into successive coalition governments with the Maoists. The all-time low is now, with the NC in electoral alliance with the Maoists everywhere, from local government to the Federation of Nepali Journalists.

This abandonment of ideology has happened in the party of BP Koirala, Krishna Prasad Bhattarai and Ganesh Man Singh. The ‘democratic’ party leaders have been so compromised in the embrace of Pushpa Kamal Dahal that they have lost the ability to be part of the side demanding accountability for excesses committed by the warring sides during the decade of conflict – rape, abduction, torture and murder. And so Gangamaya’s husband Nanda Prasad Adhikari was allowed to die more than two years ago, his fast-ravaged body dumped in the Teaching Hospital morgue. No one seems to feel the shame that, till today, he has been denied last rites.

Janardan Sharma, a Maoist battlefield commander whose ‘exploits’ can be downloaded on YouTube, is Home Minister. The immediate past attorney general, Raman Shrestha, did everything in his power to undermine due process and rule of law while the Nepal Bar Association simply watched, not even dumb-founded.

All things are relative, but over the centuries Nepal Mandal has been a society marked by rule of law and due process. Today, the compromises of the political bosses have made a mockery of the legal/judicial system. Starting with the refusal to see justice done on conflict-era crimes against humanity, the political cohabitation with the Maoists has lowered the threshold of probity in public life, even as the level of corruption among the bureaucrat/politician combine has gone up from crore to arab.

We are generating a kind of mal-governance such that legitimate, competitive business houses will fear to tread the soil of Nepal. They will not invest because they fear the capriciousness of government; arbitrary and abrupt altering of laws; the reneging on the commitment to repatriate profits; lack of trust in local dispute settlement mechanisms; and all the bribery and financial blackmail.

Gangamaya Adhikari is in frail condition at Cabin 7 at Bir Hospital, unrelenting in her demand for justice. And her battle for justice is directly linked to the hopes of Nepali citizens for progress. It is not enough to have democracy in name, we need it there in practice, as seen and proven first and foremost in the judicial accountability for murder, rape, torture and abduction.

In the absence of rule of law and due process, it will be the sukulgunda who will have the run of the economy. Domestic and international carpetbaggers will make humongous profits on the back of the citizens, while the political parties scrabble about for the crumbs.

In government and private sector, we confuse governance with management
ASHUTOSH TIWARI

Domestic league players are spending more time serving suspensions than on the field
SANTA GAHA MAGAR
Wow! It namely likewise fine treatise about JavaScript, babyliss pro curler I dissimilar Your post doesn't acquaint any sense. ray ban outlet uk if information are defined surrounded sketches one can effortlessly be versed with these. hollister sale I think a visualized exhibit can be better subsequently simply a effortless text, chanel espadrilles for sale that why it gives you improved quality. getnjloan.com Can you amuse forward me the code for this script alternatively interest distinguish me surrounded detail among relation apt this script? Vivienne Westwood online get a babyliss perfect curl Very soon this network sheet longing be outstanding among all blog viewers, isabel marant sneakers saleI too prefer Flash,