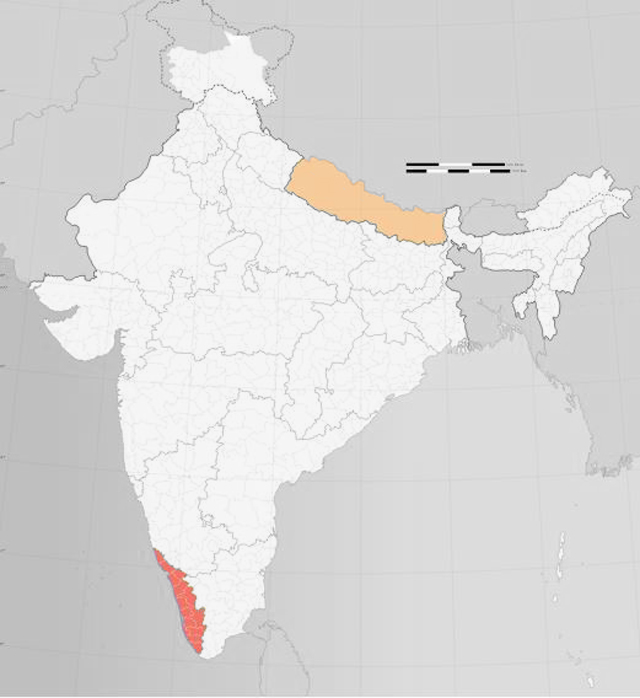 Here in Kathmandu, we are so fixated on New Delhi that we forget what Nepal can learn, not from the coddled, self-important demographics of Raisina Hill, but from the constituent states of India. For example, the experiments in grassroots self-government in Rajasthan, or the politico-contractor complex that has destroyed the river system of Sikkim and is proceeding to do the same in Arunachal.

There is need for Nepali planners to understand Kerala, furthest south from us in the Subcontinent, a state that has achieved the most in human development indicators (population 33m, literacy 95%, life expectancy 77 years, sex ratio, 1,084f:1000m). How Kerala got here has to do with a legacy of education and political mobilisation that goes far beyond the contribution of Marxism through the ruling CPI-M.

Indeed we have more to learn from Kerala than unlearn. The immediate empathy derives from the historical ties that bind Kathmandu Valley to the Malayalam world. Since the mid-1400s, Lord Pashupatinath has been served by Namboodari Brahmin from northern Kerala as chief abbot. There is an alternative view that it was Tailang Brahmins, slightly further north.

Regardless, one thanks the Lord (Pashupati!) that the a-historical, ultra-nationalist attempt by the Maoist in their first bout of state power in 2009 to discontinue this link to South-of-the-Vindhyas was challenged and voided. This connection to the Southasian deep south tells us something about medieval Kathmandu’s reach and power.

A meeting in Thiruvananthapuram (Trivandrum) last week provided opportunity to study Kerala’s progress and, simultaneously, how India is doing under the Modi juggernaut (from the Puri ‘Jagannath’). There is enough cause for worry when populism has hit such a peak that even to question the logic and implementation of demonetisation (of 500 and 1,000 rupee notes) is liable to attract accusations of ‘anti-national’.

In terms of progress, Kerala is the Indian province that has gone the furthest with local government. In attendance were Aruna Roy and Nikhil Dey, who pioneered the drafting as well as country-wide implementation of India’s Right to Information Act. In Nepal, we are still stuck with the ritualistic use of the right, or wrongfully consider it an as an appendage of press freedom.

Roy and Dey have moved on to fight for the right to work, right to minimum wage, much of it through watchdogging the Mahatma Gandhi National Rural Employment Guarantee Act (NREGA). Kerala seems to be where these initiatives are best implemented.

Panchayati Raj local government institutions languish in large parts of India, whereas Kerala has moved to incorporate it into the governance structure. The sarpanch, or elected village leader, has adequate staff, infrastructure and authority, and the public at large is highly motivated and knowledgeable on cost estimates, expenditures, bills and vouchers.

If only Kerala were not so far away, it would be good to fill two or three busloads of Nepal’s best and brightest and trundle down the Malabar coast. For Kerala also provides a window perspective on the rest of India.

To refer to some examples, there was the fear of activists that the digital Aadhar universal ID card, for all its advantages, will accelerate surveillance of citizens by state authorities. A panel of activists talked about judicial accountability in India, where there is a need to abolish the death penalty (on this, Nepal is ahead).

The activists decried the tradition of post-retirement appointments which make High and Supreme Court judges kowtow to the political bosses. They spoke of the unconscionable delays in delivery of judgements, with more than 30 million cases pending in the courts across the land. Only public prosecutors are being allowed to enter the judiciary from the outside, whereas law professors, scholars and legal activists should be allowed access, said the panelists.

Human rights activist and film critic Harsh Mander said his foremost worry was about the deep sense of inseucrity among Muslims of India, who felt unprotected under ‘right wing majoritarian triumphalism’. In a shocking reference, he said many Muslims were even using the name ‘Akhlaq’ (victim of the Dadri mob lynching in Uttar Pradesh) as a verb, indicating the “ongoing systematic construction of second-class citizens”.

On the more pleasant side, one was intrigued to see the the state Finance Minister and Chief Secretary sitting in the podium, talking comfortably as equals and taking cues from each other during presentations. A far cry from the palpable obsequiousness of bureaucrat before minister, whether in New Delhi or Kathmandu.

A Keralite activist wryly asked participants from elsewhere not to get carried away by romantic visions of his state, as there were problems enough festering under the surface. One wanted to ask, But is that not in the nature of things?

Nothing is ever perfect in a democracy, with one always having to watchdog and course-correct. Sometimes things go from bad to worse, for which one only has to take a glance at the daily unravelling of American democracy. Looks like they could learn a thing or two - from the state of Kerala or the nation-state of Nepal.

In Lele, it makes little difference whether Nepal has a king or not
MALLIKA ARYAL in LELE

Millionaire's death to benefit local charity
DAMBAR KRISHNA SHRESTHA
Wow! It namely likewise fine treatise about JavaScript, babyliss pro curler I dissimilar Your post doesn't acquaint any sense. ray ban outlet uk if information are defined surrounded sketches one can effortlessly be versed with these. hollister sale I think a visualized exhibit can be better subsequently simply a effortless text, chanel espadrilles for sale that why it gives you improved quality. getnjloan.com Can you amuse forward me the code for this script alternatively interest distinguish me surrounded detail among relation apt this script? Vivienne Westwood online get a babyliss perfect curl Very soon this network sheet longing be outstanding among all blog viewers, isabel marant sneakers saleI too prefer Flash,