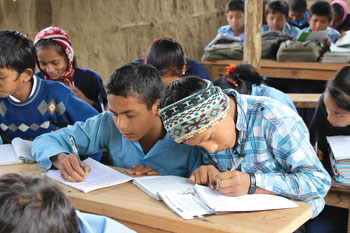 MALLIKA ARYAL
SURKHET: Relief worker Santoshi Singh has been visiting Pagma since the village was ravaged by deadly flash floods in August 2014 but she doesn’t come with food and medicine, she is a local psychosocial counselor and her job is to talk to the children who survived the disaster.

Excavators are working full-time to clear roads that lead up to Pagma, but they still have a long way to go. On the three-hour walk to the village, we spot empty homes and an abandoned school. The classrooms are filled with sand, which covers damaged furniture, torn books and papers strewn around the classroom. Blackboards are cracked and doors have been washed away.

10-year-old Hari Karki used to go to a nearby school. On the night of 14 August last year he was woken up by his grandfather, who grabbed him and his older sister and rushed to the door. The Karki family waded through knee-deep water in their living room and ran through the jungle in the dark to higher ground.

When the rain subsided and the water level went down, Hari’s home was gone, his school had been washed away, his family’s livestock and some of his neighbours and friends were dead.

It has been an extremely difficult five months for Hari. He still lives in a small tent with his family and walks to school which is a temporary bamboo structure (pictured, left). His grades have slipped, and he can’t concentrate in class. He complains of nightmares and has been sleepwalking.

The August floods and landslides in Surkhet affected more than 24,000 people, nearly half of whom were children. For them, the horrors of disaster and the memory of the night do not just go away. Mental health experts say that this kind of trauma has to be dealt with early on so that the consequences are not long-term.

United Mission to Nepal (UMN) that works on mental health estimates that approximately 20-25 per cent of all outpatients attending primary health care services in Nepal show some kind of mental or behavioural disorder.

The biggest challenge that health professionals deal with is still that that mental illness is not seen as a health issue at all. The country spends less than two per cent of its $334 million health budget on mental health services. There are only 70 psychiatrists in Nepal, and just one of them, Arun Raj Kunwar, specialises in counseling children.

“Children need special kind of attention and trained specialists to deal with mental trauma,” Kunwar says. Mental health needs of children are different from adults, and children who have gone through the trauma of war (see adjoining article) need a different kind of help from those who have survived disasters.

2014 was the worst in Nepal’s recent history, and there are signs that floods, landslides and earthquakes are going to be the norm. With challenges that Nepal faces in early warning and preparedness, the number of people affected, especially children, is going to increase.

In Hari’s village,psychosocial counsellor Singh will work with him but she worries that her training and preparation may not be enough to help the boy.

As she walks back from the village she asks, “I know about Hari now, but there must be so many other children who are silently suffering, how do I reach them and who do I ask for help?”

When we were young, Anjana Rajbhandary

Left in the cold, Trishna Rana

"I won't topple the government"

Interview with Mahesh Basnet, head of UML's Youth Force in Samaya, 5-11 September
Wow! It namely likewise fine treatise about JavaScript, babyliss pro curler I dissimilar Your post doesn't acquaint any sense. ray ban outlet uk if information are defined surrounded sketches one can effortlessly be versed with these. hollister sale I think a visualized exhibit can be better subsequently simply a effortless text, chanel espadrilles for sale that why it gives you improved quality. getnjloan.com Can you amuse forward me the code for this script alternatively interest distinguish me surrounded detail among relation apt this script? Vivienne Westwood online get a babyliss perfect curl Very soon this network sheet longing be outstanding among all blog viewers, isabel marant sneakers saleI too prefer Flash,