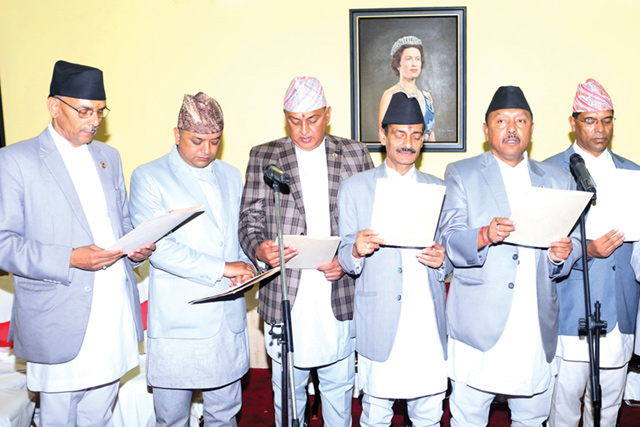 Those who argue that a woman’s elevation to power does not necessarily advance the interest of women cite examples of Benazir Bhutto, Khaleda Zia, and Sheikh Hasina. There were also Indira Gandhi, Golda Meir and Margaret Thatcher who wielded power, but chose to rule their countries with a pro-militaristic attitude that served the male-dominated establishment. It is only fair to assume that Hilary Clinton’s past hawkish approach to US foreign policy will not advance the cause of feminism. Statecraft requires leaders to act tough to prove their mettle, more so if they are women.

The same argument crops up every time there is a demand in Nepal for fair representation of women in leadership. It is said that female representation in parliament does not guarantee better lives for women. When a woman is elected to a significant post, her merit and competence are doubted, and her elevation often attributed to ‘positive discrimination’. The old boys’ club is also cited. It is not mere coincidence that most women in politics are either born or married into political families. But that is not the whole truth — Nepal’s political establishment is sexist to the core.

Despite her proven record, a woman’s leadership capacity is questioned across the board. She is held against unrealistic standards that do not exist for men. Women leaders are expected to be motherly, divine and untouched by sin. Corruption has to do with power, it requires a favourable ecosystem to protect those on the take. Ministers like Sarita Giri and Radha Gyawali are fired without a second thought while men like Vijay Kumar Gachhadar and Mahesh Basnet stay in government despite shady backgrounds.

An increased proportion ensures ‘substantive representation’ in support of feminist issues. A recent study in Argentina found that such a boost was associated with more women’s rights bills being introduced. In India, women are more likely than men to raise issues of domestic violence. In Bostwana and Rwanda, female MPs passed women-friendly bills despite stiff opposition from men.

Nepal’s new constitution sets women’s representation in parliament at 33%. Women lawmakers constituted only 29.8% in the second CA, but it is higher than the 22.3% world average of women parliamentarians. The election of Bidya Bhandari as President and Onsari Gharti Magar as the Speaker of Parliament marked a tangible shift in Nepali politics. The appointment of Sushila Karki as Nepal’s first woman Chief Justice added another gender milestone.

Prime Minister Pushpa Kamal Dahal repeated this week that the increase in female participation in Nepali politics was a direct result of his armed struggle. While this has some merit, he overlooks the confluence of strategies of both internal and external women’s movements, which helped women advance their status during and after the conflict.

Conflict have levelling effects as societies seek to re-create themselves by framing new constitutions. During the war, gender roles were disrupted, pushing women into new activities in the absence of men.

Women were also exposed to political opportunities, both as members of the Maoist movement and as peace mobilisers. However, if women’s organisations had not seized the opportunity during the constitution-making process, the deep institutionalised gender bias in society would have persisted. Throughout the tenure of the first and second CAs, various organisations and feminist groups lobbied vigorously to secure reservations for women. In addition, emerging international norms and mounting pressure from bilateral donors and international agencies gave women a new impetus to demand a political presence.

Nepal’s brazenly biased citizenship laws prove that Nepali politicians still do not believe women to be as capable and deserving as men. Further proof of male domination is the composition of the coalition cabinet. Of the 13 allotted seats, the Nepali Congress could come up with only one woman minister. The Maoists included only two women in government, but they are only state ministers.

Why do we need more women ministers if we already have so many women parliamentarians? The answer is simple: because female representation in the executive has a symbolic effect. They serve as role models and inspire other women to engage in politics. More importantly, they help to raise awareness of what women can achieve if they can wield political power.

Who has gained from the past six years of conflict? We know who has lost: the Nepali people.
CK LAL

"Kathmandu is an island in an ocean of poverty."

Development takes a great leap forward as suspension bridges span rivers across Nepal.
HEMLATA RAI
Wow! It namely likewise fine treatise about JavaScript, babyliss pro curler I dissimilar Your post doesn't acquaint any sense. ray ban outlet uk if information are defined surrounded sketches one can effortlessly be versed with these. hollister sale I think a visualized exhibit can be better subsequently simply a effortless text, chanel espadrilles for sale that why it gives you improved quality. getnjloan.com Can you amuse forward me the code for this script alternatively interest distinguish me surrounded detail among relation apt this script? Vivienne Westwood online get a babyliss perfect curl Very soon this network sheet longing be outstanding among all blog viewers, isabel marant sneakers saleI too prefer Flash,