How not to reinvent the wheel

Donor funding should not just go for reconstruction, but help build capacity 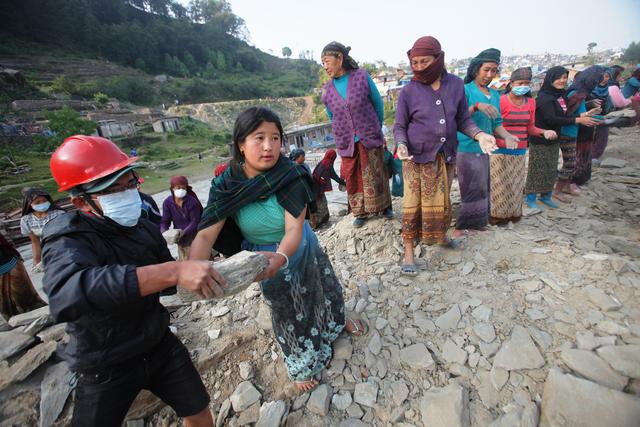 Ahead of a major donor conference scheduled for 25 June in Kathmandu, Nepal and its international partners needs to seriously think about what kind of help would be most cost-effective and sustainable.

By taking it so seriously, the government is going all out to convince donors to overcome their misgivings about the lack of accountability and governance and open their purse strings. It has put a target of Rs 6 trillion for earthquake rehabilitation.

As the ongoing relief work has once again shown, making resources available is only part of the story. Getting it quickly and efficiently to the neediest beneficiaries is the bigger, and often unmet, challenge. Relief supplies have been derailed, hijacked by the national government or local political cadre. Even some well-meaning NGOs didn't really care where the supplies went as long as they had their handover photo-ops.

The Rs 15,000 immediate relief for families whose houses were destroyed is also being sidetracked by the not-so-needy, and the number of houses in certain VDCs has exceeded the total before the earthquake. Political goons are threatening and forcing VDC secretaries to certify themselves as victims many times over. Despite a quarter of a century of democratic institution-building there is still no accountability and nothing to protect us from local political tyrants.

In a column titled 'Follow the people' in this space two weeks ago, I drew attention to the exemplary work done by forestry user groups and Female Community Health Volunteers in Nepal -- a feat made possible through concerted support of many donors coordinated by the Nepal government. It proves that building national capacity for managing development and relief must be a vital part of what is discussed at the donor meeting. There is no point re-inventing the wheel.

We now know that money alone does not make rehabilitation work. In fact, by itself it is more of a nuisance and distorts and worsens the power relations between local 'high caste' feudal elite and their poorer 'low caste' neighbours by widening the income gap. In fact this is why Nepal has remained desperately poor and underdeveloped despite 25 years of 'representative democracy'.

Survivors of the quake have once again brought into focus the real face of Nepal's widespread and chronic poverty. Most of the 700,000 houses that came down with the quake were those built of stones, brick and mud mortar. That was what the poor could afford. Earthquake rebuilding and rehabilitation must therefore acquire a wider scope and include rebuilding economies as well. This would call for a longer term undertaking that goes far beyond one-time pledging and grant of big money as the government seems to optimistically expect.

Plainly put, the donors for earthquake rebuilding must first realise that their accountability is much more, if not exclusively, towards survivors of the earthquake and not the political and bureaucratic bosses who pretend to represent them. The people already know fully well that the so-called 'national unity government' is going to be a mechanism for a share in the earthquake rebuilding pie for all politicians.

Without concomitant institutional innovation and capacity building at the grassroots, earthquake rebuilding funds too are going to evaporate in transit as it has in the long sordid history of foreign aid in Nepal. Donor agencies, particularly the big ones, must prevail upon the government to:

1 Institute an apolitical leadership for earthquake rebuilding, possibly by the President himself, like the way it was done in the Pakistan earthquake of 2005.

2 Form a professional agency to work out a program of action, including an institutional mechanism for effective quake rebuilding.

3 Install an apolitical mechanism, perhaps involving the security forces, to backstop the quake-affected communities at the grassroots.

4 Create a network of quake survivor groups at the grassroots to manage their own reconstruction and rehabilitation.

Moving out of the darkness together, Sanduk Ruit

Interview with political scientist Krishna Khanal in Deshanter, 2 February
Wow! It namely likewise fine treatise about JavaScript, babyliss pro curler I dissimilar Your post doesn't acquaint any sense. ray ban outlet uk if information are defined surrounded sketches one can effortlessly be versed with these. hollister sale I think a visualized exhibit can be better subsequently simply a effortless text, chanel espadrilles for sale that why it gives you improved quality. getnjloan.com Can you amuse forward me the code for this script alternatively interest distinguish me surrounded detail among relation apt this script? Vivienne Westwood online get a babyliss perfect curl Very soon this network sheet longing be outstanding among all blog viewers, isabel marant sneakers saleI too prefer Flash,