The Rohingya have been fleeing persecution in Burma for decades 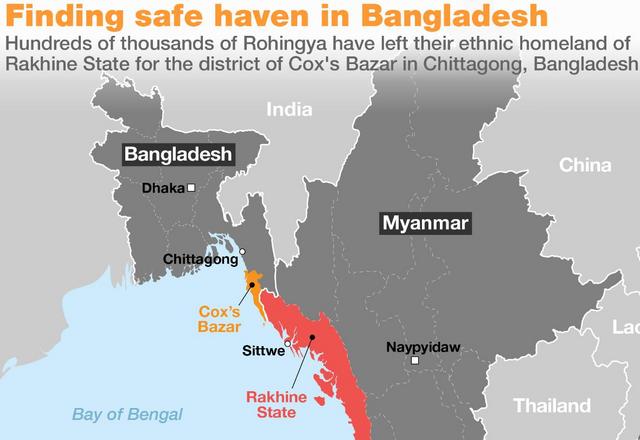 Since, August 25 more than half a million Rohingya Muslims and Hindus, women, children and men have fled their homes in the Rakhine state of Burma as the army and Buddhist vigilantes systematically burning down their homes and unleashed mass murder, rape and torture.

Rangoon calls the Rohingyas illegal immigrants despite evidence that they have inhabited the Arakan territory for hundreds of years prior to colonial rule. Persecution of the Rohingyas has worsened with the democratic forces sharing power with the military in Burma.

It seems to be Burma’s ‘final solution’ to expunge from its territory and its 200 year old history of migration, the minority it persists on labeling ‘Bengali’. If this massacre continues the entire remaining Muslim population of Rakhine state could flee to neighbouring countries by the end of the year.

Rendered stateless since the 1970s, Rohingyas have been fleeing persecution into largely Bangladesh but also India, Pakistan and Sri Lanka and in leaky boats to Thailand, Malaysia, Indonesia and Australia. After the recent cycle of violence and flight in the last three months, the International Organisation for Migration (IOM) has registered 537,000 new arrivals in Bangladesh alone.

The International Permanent Peoples Tribunal (September 2017) has ruled the Rohingya crisis as genocide, denouncing the United Nation’s use of the term ethnic cleansing as a ‘euphemism’ with ‘no basis in international law’. After a week-long hearing at the Tribunal held at the University of Malaya, Judge Daniel Feierstein stated that the Burmese government was guilty of “war crimes, crimes against humanity and genocide”.

The international community’s low level response to the scale of the human rights and humanitarian emergency and its lack of will to pressure Myanmar can only reinforce the vulnerability of an oppressed and abandoned peoples to extremist influences in a volatile region. International aid agencies estimate that barely 27% of urgently needed help is available.

India and China have deep economic, military and diplomatic ties with Burma, but they have voiced support for the government’s military action against an alleged Rohingya secessionist threat. In the United Nations Security Council, China used its veto to block attempts to address reports of the army’s abuse of the Rohingyas.

Chinese Foreign Minister Wang Yi told UN Secretary-General António Guterres, that China supports efforts by Burma to protect its national security. Indian Prime Minister Modi on a visit to Burma in the midst of the violence in August echoed, without reservation, the Burmese government’s rhetoric branding the Rohingya as ‘terrorist’ and justifying the military action . (Subsequently, India has extended generous humanitarian assistance to Bangladesh.)

India is expanding its military engagement with Burma and has announced support for its fight against Muslim ‘terrorists’ who are trying to establish an independent Rohingya state. India has also said that it will deport 40,000 Rohingya who fled to India for asylum in the 2012 cycle of violence. The Indian government asserts that the Rohingya refugees are connected with ISIS and Pakistani militants. No evidence has been produced. India has not supported Bangladesh’s call for a Commission of Inquiry into the violence. This stems from the ruling BJP’s ‘Islamophobia’ as well as domestic political calculations that a tough line on Muslim refugees will play well with the party’s Hindu nationalist base.

Meanwhile, ASEAN’s principle of non-interference in the internal affairs of member states has stymied any regional response and constrained member states Indonesia and Malaysia from doing more. The Organisation of Islamic Conference member countries have been loud in rhetorical condemnation but short in action and in financial assistance.

Stateless persons cannot return to the country which has taken away their citizenship. The massive violation of human rights of the ‘stateless’ Rohingya people and the resultant humanitarian crisis calls for an urgent need for states to recognise the special characteristics and the vulnerability of stateless persons who do not have the ‘right to have rights’.

The fact that the stateless Rohingyas have no country to return to poses a serious political crisis for the entire region. The states and the civil society of South and South East Asia need to address the issue of the creation of statelessness urgently in the interest of peace, prosperity and political stability of the region.

Nepal's Rohingya, From the Nepali Press