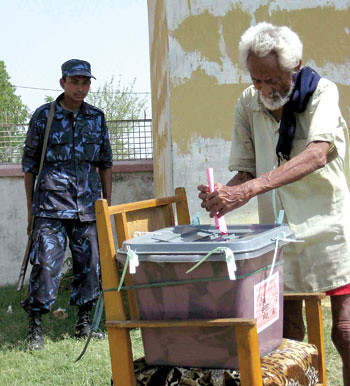 After decades of corrupt, incompetent and irresponsible mis-rule by politicians of all stated ideological hues, the Chief Justice-led election government is the best thing to have happened to the people of Nepal.

The impeccable professional credentials and courage that Khil Raj Regmi brings to his new office puts the political parties to shame for their collective failures. By the logic of political science, this role of taking over from squabbling and non-performing politicos and organising elections should have rightfully gone to the country's President.

But President Ram BaranYadav seems to have been passed over for being pro-NC, and also for cosying up with the Indian establishment to reinstate Gen Katuwal as army chief in 2009.This unfortunate and unnecessary diminution of the stature of the country's Presidentalso has its own implications for the credibility of the present election government.

While Regmi may be committed to holding an election that is free and fair, the present law and order situation is not conducive to such an election. In the 2008 election for the CA when the Maoists blackmailed voters by threatening to go back to the jungle if they did not win, that can’t be allowed to happen now.

While the Baidya faction--which has not registered itself as a separate party, possibly in the hope of reuniting with the mother party when the bargaining is right--held the country to ransom by imposing a series of shutdowns last week through intimidation and mindless destruction of public and private property. They have now promised fire and brimstone and a boycott of elections.

Maoist leader DevendraPoudel ‘Sunil’ has threatened rights activists with “stern action” if they did not stop asking for arrest of murder convict, Balkrishna Dhungel. On Sunday, the Maoists unleashed their YCL to hijack the Occupy Baluwatar protests which have been going on for three months.

If this is the way it’s going to be, you can kiss a peaceful election good bye. Dhungel is just the tip of the iceberg, there are many political figures with criminal conviction or culpability who made it to the last CA and are most likely to be candidates in the next elections. Regmi has his work cut out: get the new Election Commissioner to purge the candidate lists of such elements.

The sense of impunity among the parties is too deeply ingrained, and the police are just mute spectators when confronted with mayhem in the name of politics. The fact that the security forces forged an understanding with the Baburam Bhattarai-led government to let bygones be bygones and not prosecute war crimes is a question mark on their role of providing electoral security. As it is, almost all major parties have militant wings, euphemistically called ‘youth’ organisations, who are going to use their muscle power during the campaign period and on election day.

Another challenge for the new government, particularly Chief Secretary-turned-Home Minister Madhav Ghimire, will be to restore the professionalism and integrity of the security forces which have been decimated by years of political interference. He has to sanitise them and let them who is boss now.

Then there are spoilers from our “near abroad”. Not too long ago, a lowly Indian diplomat based in Birganj was reported to have instigated Madhesi politicians to “set the Tarai on fire”.

The Regmi government has a near-impossible task, especially with the four party high level mechanism itching to interfere in every decision. This is where the international community has a crucial role to play too by backstopping the electoral machinery with necessary hardware and logistical support. In specific terms, India, China, US, EU and the UN have to come together in a consortium to help the election government that they had a hand in creating so the elections are free and fair.

This time around, it has to be much more than former US President Jimmy Carter stamping a premature seal of approval as he did in 2008.