Shey-Phoksundo may soon become a bus park, rather than a national park 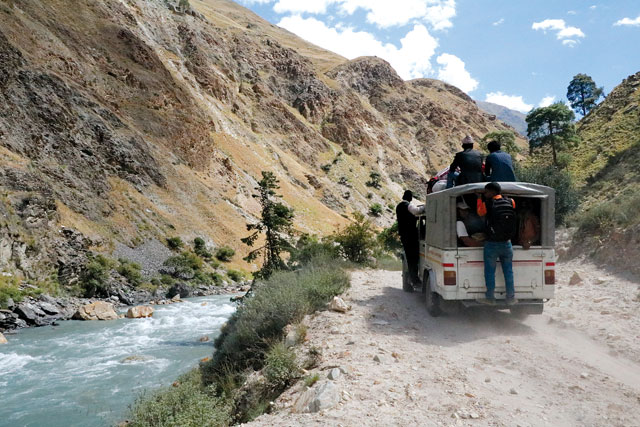 Dolpo is home to many of Nepal’s protected mammals including the snow leopard, Himalayan wolf and musk deer, and is a major storehouse of high-value biological resources like the yarsa. It is endowed with some of Nepal’s most scenic natural landscapes such as Phoksundo Lake, the holy Crystal Mountain and Kanjiroba Himal, and is also the last remaining repository of the Bon culture.

The larger part of the district is made up of Shey-Phoksundo National Park, which was set aside in 1984 for the conservation and management of its nature and cultural heritage. However, Shey-Phoksundo is not treated as a national park: it is used by outsiders and even the government mainly for revenue extraction rather than conservation.

For a small fee, outsiders are allowed to roam across the high slopes every spring to pick yarsa, severely disrupting the ecology of the region. In 2016, I recorded two snow leopard cubs that had been tranquilised by yarsa harvesters, probably by poisoning. I saw a blue sheep being poached and three stone traps set for these animals, which are the main prey of snow leopards. One of these traps was first recorded in 2011, and is still there.

Recently, we rescued blue sheep trapped in wire snares 5km from the National Park and Nepal Army post in the village of Tso. Momo dumplings made with the meat of blue sheep are in high demand in the Lamar border checkpoint between Dolpo and Tibet.

While working on my thesis on the impact of the yarsa collection on the snow leopard, I found that nearly seven out of every ten respondents had no permit slip from the national park to harvest yarsa. Local residents have to pay Rs500, Dolpo citizens Rs2,000 and outsiders Rs 3,000. The park collected Rs9.5 million from yarsa harvesters last year.

With the road connecting Dunai within two years, Dolpo needs to adopt a strict eco-tourism model. Only 431 foreign tourists visited the national park last year, but most of their fees went to the national exchequer rather to the local economy. This number will grow, with a large influx of Nepali visitors once the road is complete. The challenge will be to conserve Dolpo’s natural resources and protect its cultural heritage from greater tourist inflows.

Blunders have already been made: like the ugly stone wall constructed at enormous cost by the Lake Conservation Committee with support from the National Lake Conservation Development Committee (NLCDC). Supposedly built to protect the lake, it ended up becoming an eyesore. The money could have been spent on sediment control gabion walls along three major glacial river inlets into the lake.

A majority of the locals support the arrival of the new road because it will bring free-spending Nepali tourists who will stay in lodges. There is also a road linking Tibet with Upper Dolpo, which will reach the region even sooner.

Last year, as a member of the Dolpo Expedition on George Schaller: Return to the Realm of the Snow Leopard, I saw that most monasteries were empty and in a state of disrepair. Many of the monks were missing. Dolpo’s unique pre-Buddhist Bon culture is being gradually eroded by time.

Dolpo’s former Saldang, Vijer and Phoksumdo VDCs are now grouped under the Shey Phoksundo Village Council. In recent local elections the council head was elected from Saldang and his deputy from Vijer, and Phoksundo was denied the right to host the council headquarters as previously agreed. In retaliation, Phoksundo has cancelled timber extraction and plans to ban yarsa harvesting and grazing for residents of Saldang and Vijer. Traders from Phoksundo used to take their Tibet caravans to Kyato through Saldang, but this year have re-routed them through Dho Tarap to Lamar on the Chinese border.

To conserve Dolpo's wildlife, preserve its unique culture and address natural resource conflict among locals, the Nepal government will have to work harder than before to enforce laws and plough back tourism earnings for local conservation.

Dinesh Gaule, Himalaya Times, 11 March
Wow! It namely likewise fine treatise about JavaScript, babyliss pro curler I dissimilar Your post doesn't acquaint any sense. ray ban outlet uk if information are defined surrounded sketches one can effortlessly be versed with these. hollister sale I think a visualized exhibit can be better subsequently simply a effortless text, chanel espadrilles for sale that why it gives you improved quality. getnjloan.com Can you amuse forward me the code for this script alternatively interest distinguish me surrounded detail among relation apt this script? Vivienne Westwood online get a babyliss perfect curl Very soon this network sheet longing be outstanding among all blog viewers, isabel marant sneakers saleI too prefer Flash,