Best of a bad lot 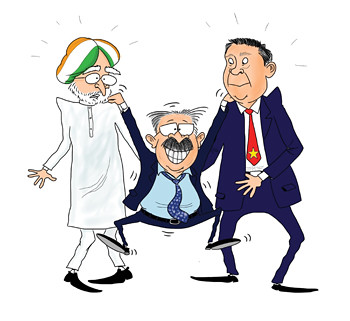 DIWAKAR CHETTRI
Traditional political heavyweights in Kathmandu were wringing their hands in dismay at this week’s visit of Unified Communist Party of Nepal (Maoist) Chairman Pushpa Kamal Dahal to India wondering why New Delhi believes in this incorrigibly cynical and unreliable leader who exploits Nepal’s instability to chart his way to power.

At the nub of these speculations is the question: why did Dahal visit India, even as Nepal prepares painstakingly for another election for an assembly to draft a new constitution? But here in Delhi this week, many wanted to know where are the NC and UML? Why aren’t they also winging their way to Delhi?

Indeed, to New Delhi, Dahal came as a leader confident of his future and his place in Kathmandu’s rather crowded political firmament. Not only did he meet Indian leaders and officials, he gave interviews to the media and attended public functions, not hesitating to articulate his ideas or trumpeting his own metamorphosis from a guerrilla leader to a politician willing to adhere to the principles of multiparty democracy. He seemed a leader patiently waiting for history to run its course.

Dahal sure has changed since he first came here as Nepal’s newly-elected prime minister in 2008. He was then a figure of romance in India, having emerged from the jungle to spearhead a movement against King Gyanendra, who abdicated the throne under popular pressure. In the general election that followed, Dahal proved the pundits wrong as he led his party to bag the largest chunk of seats in the election. The media in New Delhi was smitten by him, tracking and reporting his movement in the capital in breathless prose.

The halo of romance around him, however, soon disappeared as Delhi looked upon him as a politician willing to cut deals to remain in power. Worse, the warmth between him and Delhi ebbed, and then quickly degenerated over the issue of civilian control of the army. Though this principle is upheld in every democracy, India was wary of supporting his decision to sack the army chief as it believed he wished to erode the Nepali Army as a counterpoise to his armed cadres. Dahal, too, hurled barbs back at Delhi.

This week’s visit was a chance for both sides to recalibrate ties and rebuild bridges. Dahal had been planning the trip to India, claiming he wanted to undertake it before he flew to Beijing. Through such pronouncement, he perhaps wished to secure early dates for his visit. It’s a measure of New Delhi’s confidence in its Nepal policy that Dahal’s visit here did not precede his Chinese sojourn.

To reconnect with New Delhi, Dahal went out of his way to convey that he is a pragmatist. At a public function, the Maoist chairman renewed his commitment to multiparty democracy and spoke of his economic vision in which India was to play a significant role. More importantly, he affirmed that his party would not indulge in anti-India rhetoric or call it the Expansionist Force, a description he blamed on the mindset of his erstwhile comrade, Mohan Baidya ‘Kiran’.

Many in India and Nepal warn New Delhi: don’t believe this chameleon. But that quality isn’t Dahal’s alone. Second, as foreign policy wonks in Delhi see it, the UCPN (M) will still emerge from the next election as Nepal’s No 1 party.

New Delhi believes Dahal is ahead of the political game in embracing the idea of ethnicity-based federalism, he is best positioned to form a broad-based coalition government post-election and consequently reflect the rising aspirations democracy usually triggers.

Delhi says it has no favourites in Nepal, but it must adjust to changing times and predict the future from its readings of the present. No doubt, the historic relationship between New Delhi and the NC still rekindles nostalgia. Yet, the NC and UML don’t appear to be nimble-footed enough to adjust to the new political reality of Nepal and unable to arrest their shrinking social base.

The subtext of Dahal’s visit to Delhi was as much about the increasing marginalisation of older parties as it was about his confidence in the role history will, once again, ask him to play.