Ashutosh Tiwari
How do some Nepalis overcome adversity and poverty when most don’t? Is it luck, or is it a combination of external support and one’s own hard work that puts some with almost no chance of turning their lives on the road to achieve conventional success? 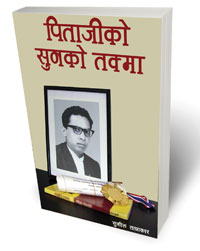 Rs 190
Sushil Tamrakar’s recently released memoir Pitaji ko Soon ko Takma (My Father’s Gold Medal) gives us a poignantly anecdotal answer. Born in a large traditional Newar family in Kasthamandap near Hanuman Dhoka, Sushil grew up believing that he was not cut out for formal education. His family did not value school, and everyone else in his tole made their living by crafting metal trinkets.

Quarrels with siblings drove Sushil’s father to take his family to live separately in a dilapidated house nearby. Cut out from inheritance, the family slid further into poverty. Sushil had to work hard from a young age to help at home. Making handicrafts before and after school, Sushil contributed a paltry sum to the family income. Initially, he and his brothers coloured papers and sold them. Later, he began to assist his mother, sewing and stitching Dhaka shawls for sale. Life was hard, and the young Sushil rarely had enough to eat, let alone pocket money for snacks. In the 1980s, Kathmandu’s urban poor, as now, struggled hard for food, livelihood and dignity.

The family’s vulnerability became all the more stark when Sushil’s father became ill. To pay for his treatment, Sushil and his brother sold family jewellery, silverware, and kitchen utensils. When that was not enough, they decided to sell the family’s one and only proud possession: a gold medal that had been awarded to his father in recognition of his civic leadership.

Having to sell the medal at 450 rupees at New Road to keep his father alive became a turning point in Sushil’s life. He vowed he would earn 10 medals to compensate for the loss. He started taking his studies seriously, transferring to Viswo Niketan School, where he found encouragement from the teachers.

This support, Sushil writes, helped build up his confidence to excel in both studies and extracurricular activities, eventually earning him several medals, including one for being one of the top ten students in the SLC nationally. Building on that achievement, Sushil went on to study engineering in India, and later earned a PhD from Drexel University in the US, where he now lives.

Written in an enviably flowing, if literary, Nepali, the gritty memoir not only shows what it was like to be poor in Kathmandu, but also makes it clear that nothing in Sushil’s background predicted that he would achieve the kind of success that he has found.

After all, once in the trap of adversity and poverty, this can suck the vigour out of most people -- throwing them deeper into desperation. To be sure, studying hard at a school with supportive teachers helped Sushil push himself to complete his education. But throughout his formative years, the danger that he would drop out of school to forever sell trinkets for food was always present. Yet he somehow managed take a different path to go beyond the circumstances of his birth.

This could be well be one man’s random luck. But a better explanation could be: In the face of poverty, Sushil showed remarkable character. He persevered through difficult times, showed abilities to seek help from authority figures, put in focused efforts, all of which, multiplied over time, and changed the trajectory of his life. Teasing out these lessons alone is well worth reading this book.