Relying on self reliance 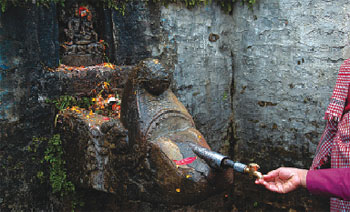 MIN RATNA BAJRACHARYA
It is a shared experience all over Nepal: you visit the hills and the plains or take a rest while hiking or trekking, and you come across drinking water taps that are dysfunctional or dry.

You ask, and it is the same story. Some NGO built those taps. Water flowed for a few months. Because of daily wear and tear, the tap required minor repairs. No one was sure who was responsible, and from where the money for the repairs would come. Eventually, this led to major breakdowns, and the water stopped coming. Meantime, the NGO has moved on to do similar water projects in other districts. And the villagers? They have gone back to fetching water from the ponds and the streams.

Three years ago, confronted with data that 82 per cent of Nepal’s population lives near water projects that needed minor repairs or major reconstruction, Nepal’s community drinking water sector accepted that there was a limit to the ‘build and the drinking water will flow forever’ approach. It realised that in planning, it had to account for likely shocks that could affect the longevity of projects. It saw the importance of equipping local people with access to know-how, funds and networks.

Since then, those involved have variously scaled up the work of training interested females as plumbers (men plumbers are more likely to migrate to the Gulf), establishing savings and credit institutions locally, customising designs to suit the disaster vulnerability of project areas, looking into ways to provide micro-insurance schemes as a protection against the loss of water assets, and urging donors to set aside funds for repair and rehabilitation.

To be sure, these built-in mechanisms will not eliminate the shocks altogether, but they will certainly help the people prepare for, cope with and survive their impact. In development parlance, these examples are of agencies and community members working together to consciously embed resilience into the design and the implementation of their projects. In times of inevitable shocks, such in-built resilience would help people withstand them, while protecting investments.

It’s arguable that these examples could also be conflated to think about national-level issues. Zoom out and this is repeated on a national scale with large donor-funded projects like ropeways, trolley buses, leather and brick factories. In the aftermath of the Sunkosi landslide and western Nepal floods, embedding such resilience into all aspects of our development work has become all the more urgent.

Nearly two months after the landslide and floods, no one knows the full names of the citizens buried and killed. This makes you wonder about the sort of record-keeping that goes on in local government offices. We do not know whether the children can go back to schools. We do not know whether those who lost their assets have access to temporary shelters, adequate public funds in the form of grants and low-interest loans, tax-supported hospitals, temporary jobs and other such provisions which could help them cope with the multiple shocks they faced.

By all accounts, the affected people have had to fend for themselves or depend on sporadic charity, which is unfortunate when the government has the convening power to bring together community groups, private sector, civil society, and national and international agencies to address the difficulties of the affected people, and devise a template for how to prepare for such shocks in future.

In the Paleti Utsav last week, Kunti Moktan sang a song — Dali Dali Ma — a line of which goes, “As a Nepali, I can even live through my worries.” Some Nepalis certainly can. But as examples from the water sector and the recent disasters have shown, most need external support to be resilient enough to dial down their worries.