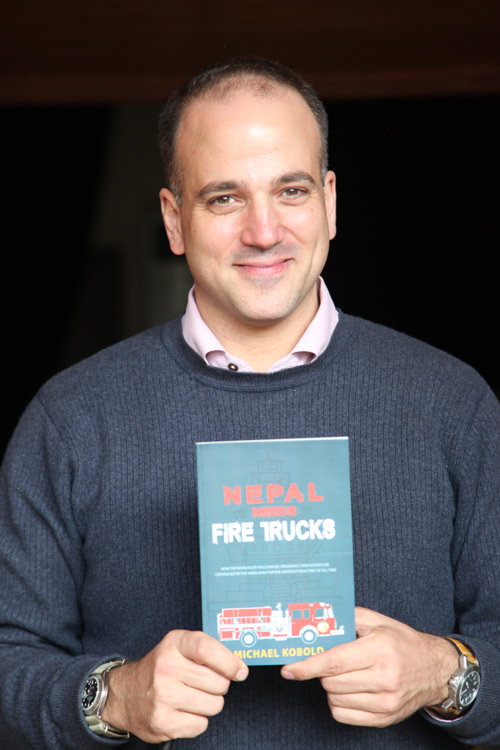 “So, what’s your story?” I asked Michael Kobold, the German-born, American watchmaker and mountaineer, at Himalayan Java in Thamel. “In one line, I love your country,” he says, adding grandiosely, “probably more than many of your countrymen love it.”

Kobold has recently written a book about a fantastical road expedition in which many Hollywood and Bollywood celebrities, as well as world-renowned mountaineers, adventurers and diplomats, drive fire trucks into Nepal. He has collected some ‘used but serviceable’ fire trucks in the US, and wants to gift them to the Nepal government, after generating enough pomp about the initiative to create a buzz around the world.

Kobold came to Nepal to summit the highest mountain in the world, which he did successfully – twice. He escaped death during the second expedition, during which he was saved by the Sherpas climbing with him. Afterwards, he established the first ‘Made in Nepal’ brand of watches training the same Sherpas as watchmakers.

“After I experienced the risks involved in high altitude mountaineering, through a near fatal personal incident, I wanted to help the Sherpas,” he says candidly. “What they did for us cannot be paid back, but I wanted to do something to keep them away from the dangerous lives they lived year after year.”

Kobold had used a piece of rock from the top of the world to make the dial of the watch, ‘Kobold Himalaya’, which he designed himself for Kobold Nepal, a company owned by Namgel and Thundu Sherpa.

Kobold’s book is about his gratitude for the Sherpas, his friendship with the American actor James Gandolfini, who died of a heart attack in 2013, and about the fire truck expedition to Nepal, which he initially planned to undertake with James but now has decided to execute as a tribute to the actor.

Nepal needs fire trucks is Kobold’s frantic attempt to launch his dream via crowdsourcing after having failed to get the title sponsor. He says he penned it in only 12 days to meet the deadline to release the book in time for Christmas.

‘My heart breaks thinking about the miseries the people of this beautiful country suffer every day,’ he writes, echoing the seemingly readymade concerned but foreign viewpoint. Kobold touches almost every problem facing Nepal: ‘the youth of this country have to go to the Gulf to work for a meagre amount, and what is worse, parents are forced to sell their children for a petty sum of less than a thousand dollars.’

After having touched all the populist nerves to tug at Nepali heartstrings, including the 2015-16 Blockade by the Indian government after the Constitution was promulgated, Kobold is literally trying to ‘sell air,’ as one of his prospective Nepali sponsors put it.

He partnered with former US ambassador to Nepal, Scott H Delsi, to set up the Soarway Foundation to raise awareness for earthquake preparedness in Nepal in 2015. Ironically, three weeks later the big one hit, on 25 April that year.

“The expedition has grown in these seven years in its scope,” Kobold tells me, still highly hopeful that he will be able to pull it out despite the hurdles he has faced. His friend’s untimely death, lack of funds, the earthquake, and the Indian Blockade were not the only challenges.

Kobold also faced the frustrating inefficiency of the Nepal Government machinery and learnt to work around it. He has cultivated high-level contacts in the government and Kathmandu society -- learning lessons from the illogical and nonsensical hurdles he faced at every step.

‘The media called me a Rock Mafia’, he says, remembering the uproar caused in the local media when the issue of using the rock from Everest for his watches became controversial in 2012.

In his book, he recounts the story of his tussle with a government official who was reluctant to grant permissions for the fire truck expedition because the official was brokering a deal to buy 50 substandard fire trucks from India.

In the end, unable to resist the insurmountable political pressure Kobold managed to throw on the official, he asked him, ‘Why are you so determined to get these fire engines to Nepal?’

Kobold writes that he waited for the official to sign the papers, took it in his hands, and replied ‘Unlike you, I love your country.’

Making allowances for the self-aggrandising, idealistic romanticism and poor attempts at humour in many places of the hastily written book, it is indeed an inspiring tale of how a foreigner has learnt the tricks of negotiating a complex society bereft of norms and ideals.

And given the lack of infrastructure and trained human resource in our unplanned cities, Nepal definitely needs fire trucks, and this expedition.

The Road to a Safer Kathmandu, Kate Ryan

It's an emergency, Paavan Mathema

Scott and the Sherpas

Kantipur, 21 December
Wow! It namely likewise fine treatise about JavaScript, babyliss pro curler I dissimilar Your post doesn't acquaint any sense. ray ban outlet uk if information are defined surrounded sketches one can effortlessly be versed with these. hollister sale I think a visualized exhibit can be better subsequently simply a effortless text, chanel espadrilles for sale that why it gives you improved quality. getnjloan.com Can you amuse forward me the code for this script alternatively interest distinguish me surrounded detail among relation apt this script? Vivienne Westwood online get a babyliss perfect curl Very soon this network sheet longing be outstanding among all blog viewers, isabel marant sneakers saleI too prefer Flash,