It is 14 August 1946 at Deshapriya Park in South Calcutta, where more than half-a-million people are present. A 16-year-old brandishing a shining khukuri gets up and roars: “Gorkhas have been wrongly alleged to be mercenaries for the British, but we shouldn’t forget that not less than 15,000 Gorkha troops deserted the British command and joined Netaji’s Indian National Army…”

That gathering 71 years ago organised by the Bengal Provincial Congress Committee one year before Indian independence from Britain was to be addressed by none other than Satish Chandra Bose, Sarat Chandra Bose and Kiran Shankar Roy. Sarat Chandra Bose had asked DB Parihar to address the gathering “as a representative of Indian Nepalis.”

DB was a ferocious political activist, who went on to become a founding executive member of the Nepali National Congress, a writer and a filmmaker bestowed with the honour of making the first Nepali feature film, Raja Harishchandra.

Shankar Tiwari was researching Nepal’s democratic movement when he stumbled upon the handwritten memoir of DB Parihar while going through the Bhola Chatterjee Papers at Nehru Memorial Museum and Library (NMML) in New Delhi. It was written by DB as a long letter to Chatterjee, a prominent journalist with sympathies for the Nepali Congress who later covered Nepal for 40 years. “At first I was confused,” admitted Tiwari, who is editing the rare memoir, to be published by Public Policy Pathshala next month. “DB Parihar’s contribution to Nepal’s democratic movement, the Gorkha movement in India and Nepali cinema seemed historic. But it is clear we hardly knew anything about the man.” DB’s family was exiled by the Rana regime to Darjeeling in 1935 when he was two years old. Like many other prominent Nepalis banished from Kathmandu, he was sucked into the Indian struggle for independence. In 1939, while at the Scottish mission school Dr Graham’s in Kurseong, he schemed to meet Subhas Chandra Bose, the legendary freedom fighter who believed in taking up arms against the British and who was under house arrest in Kurseong itself. Six-year-old DB charmed the British guards with his Scottish songs and carried letters between Bose and other leaders of the Indian National Congress, baked into bread loaves or hemmed into his shorts, which became known as the Rotiwala Courier Service. 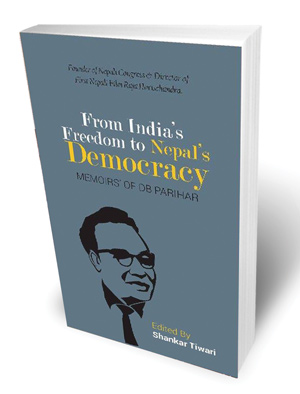 From India’s Freedom to Nepal’s Democracy

Later, while he was actively involved with the Gorkha League from Calcutta, DB was unhappy with the high command’s decision to support the Rana Regime in Nepal and formed the All India Gorkha Congress in November 1946. In January 1947, the AIGC merged with the Akhil Bharatiya Nepali Rashtriya Congress formed in Banaras, becoming the Nepali National Congress.

DB was an executive member and secretary of this party, which merged with the Nepali Democratic Congress to become the Nepali Congress at the Calcutta Convention in 1950. He was then sent to Kathmandu for a secret mission of the party carrying pamphlets about ethics of Satyagraha, letters and circulars of the party. DB recounts this secret, one-man mission with excitement in his memoir. “Many leaders had written about this mission, and some have mentioned DB. But they came to know about the identity of the man behind it much later: it was a very important role,” says Tiwari. “Nepali society needs to learn about DB: why was such a historical figure consigned to oblivion? Why have Dalit organisations not paid attention to him?”

In his recent book, Singha Durbar, Sagar SJB Rana writes: ‘DB,  representing the minority and Dalit community and from the Gorkha League, was elected unanimously to the Central Executive Committee of the Nepali National Congress.’ Such mentions, rather than an acknowledgement of the talent and contributions of a magnificent leader, are examples of the systemic discrimination Dalit leaders have faced because of the patronising attitude of the elite.

“DB’s memoir makes it clear that he got the position out of merit rather than for the sake of inclusion: Sagar Rana is not correct,” says Shankar. Being a Dalit, DB faced much discrimination. For example, he was deprived of the position of editor of the party mouthpiece. As a result, DB was attracted towards cinema, because he could show in cinema what he was denied discussing in politics. DB’s memoir is a reflection of the bitterness of exclusion.

Says Tiwari: “There is clear evidence that this memoir was written when DB’s  self-esteem was low. But whatever his state of mind, DB must have known he was writing to a prominent journalist. It tells us a lot about an incredible life, but it may also help us take a deeper look at ourselves.”

Due to a layout error the byline is missing in this column on our print edition. The error is regretted. -Editor

"If only the land I call home would shelter me", Kantipur

Devendra Bhattarai and Dinesh Regmi, 13 May

I am Amrit Nepali

From Syangja to Sydney, from Fikkal to Finland, the silent majority of Nepalis don't agree with the division of Nepal
AMRIT GURUNG

At a time when we should be valuing our multiple, intersecting identities, we are being told to choose a single, overarching definition of ourselves
RUBEENA D SHRESTHA
Wow! It namely likewise fine treatise about JavaScript, babyliss pro curler I dissimilar Your post doesn't acquaint any sense. ray ban outlet uk if information are defined surrounded sketches one can effortlessly be versed with these. hollister sale I think a visualized exhibit can be better subsequently simply a effortless text, chanel espadrilles for sale that why it gives you improved quality. getnjloan.com Can you amuse forward me the code for this script alternatively interest distinguish me surrounded detail among relation apt this script? Vivienne Westwood online get a babyliss perfect curl Very soon this network sheet longing be outstanding among all blog viewers, isabel marant sneakers saleI too prefer Flash,