Civil society to the fray

You cannot wake up someone pretending to sleep 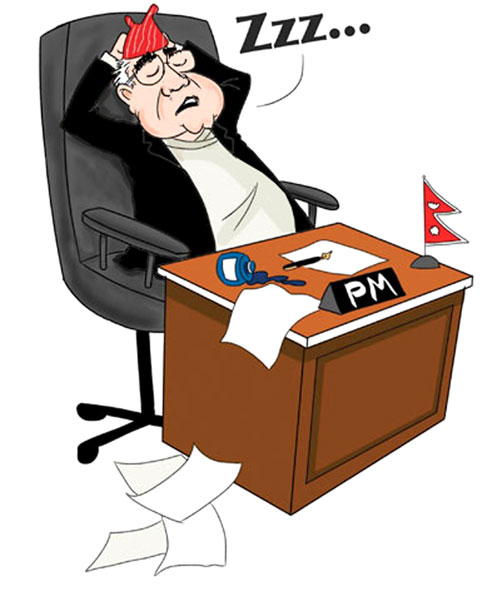 Not a day goes by without another banner headline in the Nepali-language press exposing the blatant plunder of the state in broad daylight. Every one of these cases of looting have taken place with active participation of the kakistocracy. The barefaced greed and the money involved has surpassed everything we have seen in Nepal’s sordid recent history.

The infection has set in from the head down, and has hollowed out the top political leadership. Using its ‘political mechanism’ to infiltrate the judiciary, legislature, bureaucracy, the security forces, human rights organisations and the anti-corruption watchdog, kleptocrats have sabotaged the system to divide up the spoils.

Last years, we had an indication of what was to come when one of Nepal’s most ruthless and tainted officials was appointed to head the anti-corruption body. The man was himself hounded out, not because he had become a law unto himself, but because he threatened the power of the political syndicate.

Malfeasance and malgovernance are guaranteed when power-hungry and corrupt septuagenarians with a proven inability to lead in the national interest are given turns at the helm. MPs enact laws allowing politicians convicted of corruption to contest elections. The head of the Nepal Oil Corporation, embroiled in a land scam, is protected by political patrons. Parliamentary committees are infiltrated by the medical-industrial complex. Despite Govinda KC risking his life, the evil nexus of mafia and political goons are not worried because they have rigged the system.

The moral, political and financial decay is in brazen display at every level of government right across the land. A thoroughly disillusioned public is too busy trying to survive, and those who can are leaving by the tens of thousands weekly.

The way out of this mess could have been an internal revolt within the political parties by the next generation of reformist-minded leaders. There was a glimmer of hope with figures like Gagan Thapa and Rabindra Adhikari, but they have taken the path of compromise.

Rabindra Adhikari has not yet served in government, but his shady conduct in the Ncell tax case and silence about licensing of medical colleges lacking adequate infrastructure are telling. For all his youthful energy, Gagan Thapa caved in to party pressure on appointments in medical institutions.

One hope to overhaul the system could be the self-proclaimed alternative force, Bibeksheel Sajha Party. It has jumped into the election fray, and garnered protest votes in Kathmandu during local elections. But it has not been able to turn its dissent into a movement. The party is distracted by complicated election management issues and has the singular aim of saving face in coming elections. Its actions have been neither strategic nor collaborative enough to break the stranglehold of the mainstream parties.

Civil society influencers are divided by ideology and personality. Those still on the streets have resisted jumping in because they feel Govinda KC’s sacrifice has been hijacked by Bibeksheel Sajha. There are signs that the fight against the rot hasn’t yet found a visionary leader who can drive the movement.

Continuous mobilisation and sustained emotional effort at the mass level is demanding, but there is no other way to bring about transformation in a democracy. Civil society stalwarts need to overcome their reluctance and join the alternative political force to give it a strategic direction.

Leaving the responsibility of the crusade against corruption on the frail shoulders of Govinda KC alone, and blaming the system from outside the walls will no longer suffice.

Slurp, dribble and drool this summer at the ice-cream wars.
ALOK TUMBAHANGPHEY

Ten reasons why we must not despair

Some of us were forced, nearly at gunpoint, to play with our children.
DANIEL LAK
Wow! It namely likewise fine treatise about JavaScript, babyliss pro curler I dissimilar Your post doesn't acquaint any sense. ray ban outlet uk if information are defined surrounded sketches one can effortlessly be versed with these. hollister sale I think a visualized exhibit can be better subsequently simply a effortless text, chanel espadrilles for sale that why it gives you improved quality. getnjloan.com Can you amuse forward me the code for this script alternatively interest distinguish me surrounded detail among relation apt this script? Vivienne Westwood online get a babyliss perfect curl Very soon this network sheet longing be outstanding among all blog viewers, isabel marant sneakers saleI too prefer Flash,