Sky is the Limit for Sano Babu 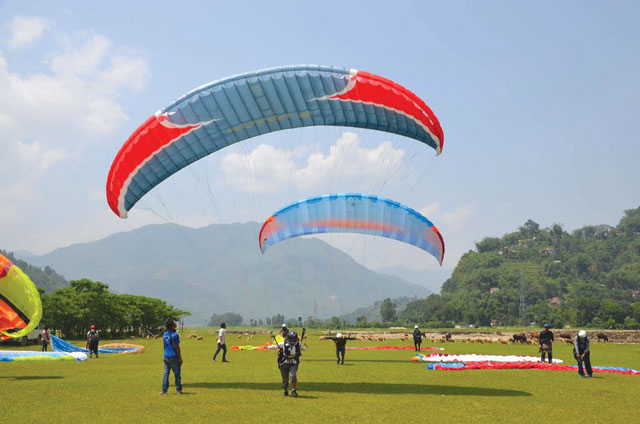 SYANGJA — Sano Babu Sunuwar is an adventurer who likes to take risks. In 2012, together with Lakpa Tshering Sherpa, he climbed Mt Everest, took off on paragliders down to the Khumbu Glacier, then kayaked all the way down the Kosi to the Ganges and finally to the Bay of Bengal. For this epic feat the two won the National Geographic Adventurers of the Year award.

Readers will be astonished to know that before their feat, Sherpa could barely swim and Sunuwar had never climbed mountains professionally. But it was the combination of sports, audacity and friendship that made the adventure possible and won them the admiration of many around the world. Now, Sunuwar is on another risky mission: to bring the 2020 Paragliding World Cup to Nepal.

“Nature has given Nepal the best nature: we have the highest peaks in the world, the wildest rivers and the loveliest valleys that soar from near sea level to the top of the world,” explains Sunuwar. “Adventure is in our blood, and we have proved to be the best in the world in many fields. Now it is time for us to take it to the leadership level.”

Sunuwar, known as ‘Babu’ by his friends, was forced to drop out of school as the insurgency raged in his native district of Ramechhap. He trained as a river guide and now runs a thriving Paragliding Training School in Syangja. It is there that he wants to bring a series of international aero-sports competitions, culminating in the Paragliding World Cup in 2020.

The World Cup is a cross-country flying competition for paraglider pilots, organised by the Paragliding World Cup Association, based in Marlens, France.  The first of these competitions will be held in November.

“Adventure tourism is a major contributor to tourism worldwide. We have the best natural setting for that. All we need is to take the initiative now,” says Krishna Jung KC, a paragliding pilot and president of the Babu Adventure Club, the main organiser of the International Open Paragliding Competition that will take place in the Andhikhola Valley,  1-5 November this year.

It is hoped that this series of international competitions will prove that Syangja has the ideal paragliding competition terrain, and that Nepalis have the organisational capability to hold the World Cup in 2020. This is a sport where Nepalis could easily repeat the international success they've had in mountain biking and ultra-marathons.

“A Nepali team winning a World Cup is a dream of many of us. I think this is the best opportunity to turn that dream into a reality. If we can hold a world cup, we can very well win it,” says Sunuwar, who is realistic enough to point out that Nepal needs to show it has adequate infrastructure.

“To dream is not enough,” he adds wistfully. “Just like you can’t dream of making a football team without a football stadium, you need an aerial stadium for aero sports.”

Sunuwar has launched a campaign to declare the Andhikhola Valley an ‘aviation sports zone’ because the region is ideal for paragliding competitions. While Pokhara is restricted to 1-km flights because of air traffic, Andhikhola has a flight radius of more than 10km.

Dilip Bagale, Deputy Chairperson of the District Coordination Committee of Syangja, has lent his support to Sunuwar’s venture, and local politicians, businessmen and social leaders are rallying behind the cause.

Megh Ale, a tourism veteran and river conservation activist who is doing for Nepal’s rafting what Sunuwar is trying to do for its sky, has also lent his support to Sunuwar’s idea of developing adventure sports tourism.

“In Nepal we have to pursue tourism as an ‘ism’, just like a religion,” Ale says. “We have the highest peaks, the best rivers and the deepest gorges. We should take the lead to make Nepal an international venue for adventure sports.”

On 9 May Europeans worldwide will celebrate Europe Day, recalling achievements and looking to the future

The best way to navigate the market for success.
ASHUTOSH TIWARI
Wow! It namely likewise fine treatise about JavaScript, babyliss pro curler I dissimilar Your post doesn't acquaint any sense. ray ban outlet uk if information are defined surrounded sketches one can effortlessly be versed with these. hollister sale I think a visualized exhibit can be better subsequently simply a effortless text, chanel espadrilles for sale that why it gives you improved quality. getnjloan.com Can you amuse forward me the code for this script alternatively interest distinguish me surrounded detail among relation apt this script? Vivienne Westwood online get a babyliss perfect curl Very soon this network sheet longing be outstanding among all blog viewers, isabel marant sneakers saleI too prefer Flash,