Without strategic intervention in education, Nepal will lose another generation to the brinkmanship of selfish leaders 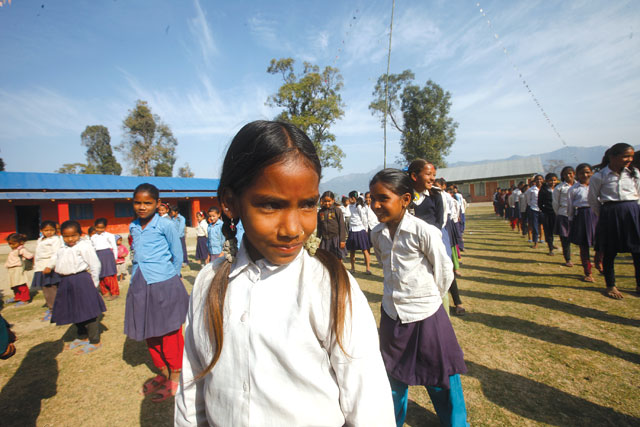 Nepal’s youth bulge (16-40 years) stood at 40.3% of the total in the 2011 census and is expected to expand to 43.3% in 2031 before the proportion of elderly will start growing. Countries like Japan, Greece and Finland are also ageing, which is causing an immediate economic imbalance.

Never before have there been so many young people in Nepal. And never before has there been such an easy flow of knowledge, skills and people across the world. These two facts put together produce immense potential for economic and social progress.

This demographic window of opportunity will only last a few more decades. And if something is not done urgently to take advantage of this, our one-time opportunity will be lost forever. For example, the GDP of many Southeast Asian countries increased seven-fold in the late 20th century, causing an economic boom described as the ‘Asian economic miracle’.

But in Latin America, education and health were neglected and a similar window was lost forever. The key to harnessing this dividend lies in education. Providing opportunities to the burgeoning young population to grow to its best potential should be the focus of all government policies, including local ones.

Our education system needs to be quickly steered towards providing interdisciplinary, analytical and creative skills to our children. Without this holistic transformation, we will continue to be the unskilled labour suppliers of the world. And that would be the greatest injustice to the future generation that present leaders could do.

A report, Education Redefined: The future is Now, published by The Economist Intelligence Unit, recently assessed the effectiveness of education systems in preparing students for the demands of work and life in a rapidly changing landscape. An ideal 21st-century education system is designed to impart interdisciplinary skills, creative and analytical talent, skills in entrepreneurship and leadership, in digital and technical areas, as well as global awareness and civic education. New Zealand, among the countries studied, scored highest in the report.

Nepal, of course, is not included in the study but its recommendations apply to us too and can help us to focus on education. This means reforming the curriculum for future skills, ensuring the effectiveness of the policy implementation system, teacher education, government education expenditure, career counselling in schools and collaboration between education and industry. Most importantly, the study concludes that a holistic and future-ready education system is inextricably linked with societal openness, cultural diversity and tolerance.

It has been recognised for decades that improving the relevance and quality of education is necessary to prepare Nepal for the future. But for the politicians at the centre, it remains a matter of least priority. A septugenerian with no interest or experience in reforming education is at the helm of Nepal’s affairs. And the situation doesn’t seem to be changing any time soon, even with new elections.

The only hope lies in improving the quality of education from the grassroots up. Under the new Constitution, much of the responsibility for education and health has been given to local governments. But even a newly-elected mayor’s hands may be tied because even under the federal system, it is likely that local governments will not have any real say in teacher management and curriculum re-design.

“Hopefully, local governments will band together to ask for alternative methods to credential schools and gain more curricular freedom,” says Saakar Pudasainee, an educational entrepreneur and activist with Karkhana, which works in STEM education in schools.

A likely solution can be local governments joining forces to collaborate with individuals, think tanks and private organisations to design and implement model solutions. Such initiatives from the local level will ensure that low-cost, organic innovation at private educational institutions can be replicated widely.

As in every sector, the ultimate hope in Nepal now is that local governments will take the initiative and wrest progress out of the clutches of politicians at the centre, who seem hell bent on sending the country into a downward spiral.

The ANA Bipalis are gearing up for their annual do.
ARTHA BEED

Kantipur, 25 June
Wow! It namely likewise fine treatise about JavaScript, babyliss pro curler I dissimilar Your post doesn't acquaint any sense. ray ban outlet uk if information are defined surrounded sketches one can effortlessly be versed with these. hollister sale I think a visualized exhibit can be better subsequently simply a effortless text, chanel espadrilles for sale that why it gives you improved quality. getnjloan.com Can you amuse forward me the code for this script alternatively interest distinguish me surrounded detail among relation apt this script? Vivienne Westwood online get a babyliss perfect curl Very soon this network sheet longing be outstanding among all blog viewers, isabel marant sneakers saleI too prefer Flash,