It would be naïve to assume that there will be no international meddling, but for the moment the new prime minister will be left alone 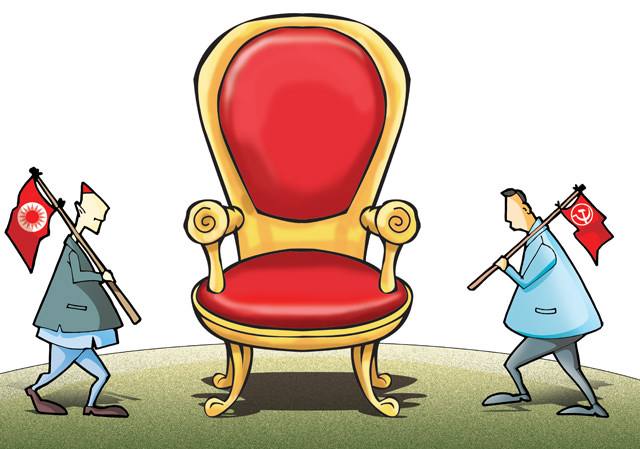 If K P Oli, Nepal’s newly sworn in Prime Minister, successfully completes his tenure of five years, it will be a record. His will be the first government in Nepal’s history to do so.

Since the Rana regime was overthrown almost 70 years ago, governments have changed 42 times. And the Nepali state desperately needs a semblance of permanence.

Carrying forward the optimism seen during the elections, with almost uniform focus on economic growth by all parties, Oli has made some good early choices in picking ministers with clean image and technocratic abilities. This has gone down well with the public.

But many other variables will be at play for his government to last. Given parliamentary mathematics, Oli cannot hold forth without the support from other parties. The pre-poll alliance with the Maoists secured him the prime-ministership and the UML and Maoists together hold more than enough seats to form a majority government. But Maoist Chair Pushpa Kamal Dahal is not an easy bedfellow.

Dahal has bargained hard to be a part of the alliance, and later for the unification of the two parties. He demands his pound of flesh. Given his history of u-turns and predictable unpredictability, it will be wise for Oli to not keep all his eggs in the Maoist basket. The election sweep has put Oli in a comfortable position, and he can hold strong with the support of some of the Madhesi parties even without support from the Maoists.

Which is why Oli’s UML is already in talks to rope in some Madhesi parties into government, and they appear to be visibly inclined. But if Oli banks too much on the Madhesi parties, the key to his government can actually go to the sides he has already locked horns with.

Displaying exemplary political acumen (and abdominal fortitude) during the Blockade, Oli took a stand against India even though he had a reputation in the past of cosying up to Delhi. What prompted this reaction in September 2016 was the Indian foreign secretary almost threatening him to ‘delay the constitution or face the consequences’.

Oli stood against India, and that locking of horns was translated into nationalism in Nepal at election time. That, along with some other sound political calculations in forging alliances, catapulted Oli to the high position he occupies today.

The changed political scenario in Nepal has put India on the backfoot, as even Indian commentators have noted. It has given Narendra Modi bashers in Delhi another good reason to pillory his foreign policy. Modi is blamed for pushing Nepal into China’s lap.

Nepal is trying hard to break away from its total dependence on India for connectivity, this has always been the biggest leverage for the southern neighbor which has not always honoured the responsibility that comes with the privilege. The story of three blockades since India’s independence cry for a Nepal with more alternatives for access.

Oli tried to do that during his previous tenure, and has already proclaimed since taking oath this time that he is looking for a balanced relationship between China and India. For the Indians, the call for ‘equidistance’ itself is anathema, and it is interpreted as a shrinking of their sphere of influence. This gives all the reason for the South Block to try to ‘disbalance’ Oli at the earliest.

Dahal, who has re-emerged as a key player, will be the one India will try to manipulate if it tries to destabilise the Oli government. Although he has a dubious history with India, at the moment he seems impressionable.

As joint-chairman of the Communist Party of Nepal formed after unification of the UML and Maoists, he and Oli need each other too much to try to unseat each other right away.

The constitution has forbidden any no-confidence motion for at least two years, making it difficult for the kind of horse-trading we are used to in Nepali politics. Also, with India approaching the General Elections in 2019, Modi’s focus will be on perception management within, leaving little room for attention to micromanaging events in Nepal.

The political scenario therefore looks in Oli’s favor. And the realisation has sunk in with India as well, as was demonstrated by a surprise visit by the Indian External Affairs minister Sushma Swaraj this month.  Modi’s eagerness to prove his government’s keenness to work with Oli, since the elections, speaks a lot.

This is a sign that Oli is here for good, and that is good for Nepal.

Aftershocks of the Blockade, Dinkar Nepal

Deshanter, 5 August
Wow! It namely likewise fine treatise about JavaScript, babyliss pro curler I dissimilar Your post doesn't acquaint any sense. ray ban outlet uk if information are defined surrounded sketches one can effortlessly be versed with these. hollister sale I think a visualized exhibit can be better subsequently simply a effortless text, chanel espadrilles for sale that why it gives you improved quality. getnjloan.com Can you amuse forward me the code for this script alternatively interest distinguish me surrounded detail among relation apt this script? Vivienne Westwood online get a babyliss perfect curl Very soon this network sheet longing be outstanding among all blog viewers, isabel marant sneakers saleI too prefer Flash,