Darjeeling and the idea of India 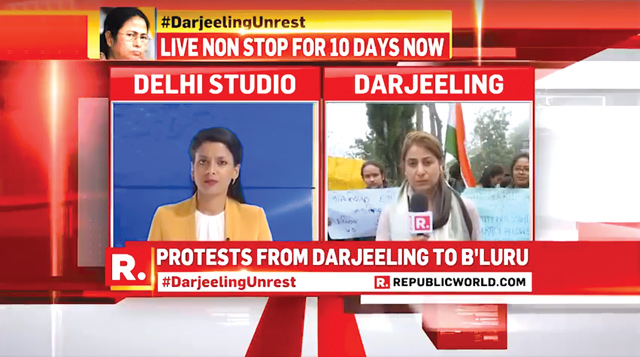 I was relating a bedtime story to our six-year-old son when my wife read an SMS on her phone: ‘Enough is enough. We want Gorkhaland now.’

Her outburst that followed startled us: “This was in the making for a long time. We are unhappy with the way things are. We look at the development that Sikkim has achieved and pity ourselves.”

My wife was born in Siliguri, a Tarai city of Darjeeling District adjoining Nepal. She went to school in various places in North India, so unlike most Indians from places other than the Hindi speaking belt of India, she speaks excellent Hindi. Till now, I had not imagined her as a passionate supporter of the Gorkhaland cause, seeing her always as someone with a strong sense of belonging to the idea of India. It took me some time to realise that she can be both at the same time.

India has been, right from the beginning, a complex political entity. In fact, many westerners  predicted at independence in 1947 that India would not last a decade as a nation. It’s a striking success of the nation-building project that India has survived. Most ethno-nationalist movements have barely been able to carve out a space in the popular psyche.

The ‘Indian Nepali’ community, in its struggle to enter the core of Indian nationhood, has discarded its association with Nepal and heavily relied on creating an identity around the term Gorkha. Gorkhaland is the dream of a homeland for the ‘Gorkhas’: Indians of Nepali origin. The main  argument is that statehood to the Darjeeling area will give them a distinctive identity, separate from those in Nepal.

The Darjeeling region became a part of Bengal by accident. In the early 19th century two British officers who were sent to the area to resolve a dispute between Sikkim and Nepal found the hill station suitable as an R&R base for British soldiers. Darjeeling had ‘home weather’ for the British, and they forced the King of Sikkim to cede the area to the East India Company in 1935. It was kept under the Bengal administration, and after India’s independence became part of the state of West Bengal.

Although the demand for the area to be administered separately from Bengal is more than a century old, the real struggle for Gorkhaland was the rallying point in 1986 for Subhash Ghisingh. The Darjeeling Gorkha Hill Council was finally established after two years and a loss of 1,200 lives. Ghisingh then ruled the hills for two decades, but the people got little out of it. Corruption was rampant and Darjeeling lagged behind Sikkim’s phenomenal progress.

In 2007, the Indian Idol reality tv show brought the community together to vote for Prashant Tamang, and Bimal Gurung saw it as an opportunity to unite the people again for the cause of Gorkhaland. He channeled the dissent that had simmered silently for many years into a non-violent political movement. The term Gorkhaland officially got associated with the area when the Gorkhaland Territorial Administration was formed as a compromise, and Bimal Gurung became the new ruler of the hills.  However, it stagnated again, a repeat of the Ghisingh era.

Now, an uproar ignited by the West Bengal Government’s recently-announced language policy has rallied people together again for the cause of a separate state of Gorkhaland. The hills are burning, and Chief Minister Mamata Banerjee in Kolkata is intent on crushing the street movement.

Looking at it from Nepal, there are clear political lessons for us. One, dissent rooted in the popular psyche may lie dormant but doesn’t fade away easily, and is ready to erupt at the smallest provocation. Two, underdevelopment feeds the fires of revolt – especially when neighbouring regions are seen to be surging ahead. There is then a tendency to blame it on ‘others’, as exploitative politicians invoke a communal identity to take advantage of the unrest.

The most important lesson for Nepal at this stage comes, however, from the strength of the idea of India as a nation. Once a strong framework for nationhood takes root in the formative years, the system builds in itself a democratic resilience that can survive and resolve conflicts without affecting the state superstructure. In Nepal’s diverse society, where the hitherto excluded are clamouring for a bigger say in decision-making under the new Constitution, it is clear that the politics of pluralism has to go hand in hand with the project of nation-building.

"India is merging with Sikkim, not the other way around."

Nepal Samacharpatra, 27 February
Wow! It namely likewise fine treatise about JavaScript, babyliss pro curler I dissimilar Your post doesn't acquaint any sense. ray ban outlet uk if information are defined surrounded sketches one can effortlessly be versed with these. hollister sale I think a visualized exhibit can be better subsequently simply a effortless text, chanel espadrilles for sale that why it gives you improved quality. getnjloan.com Can you amuse forward me the code for this script alternatively interest distinguish me surrounded detail among relation apt this script? Vivienne Westwood online get a babyliss perfect curl Very soon this network sheet longing be outstanding among all blog viewers, isabel marant sneakers saleI too prefer Flash,