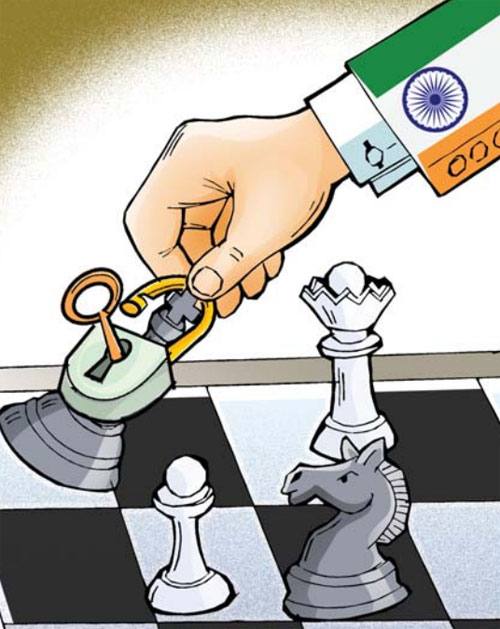 It has all too quickly become a truism to say that Nepal-India relations have never been this bad. There is an enormous load of humanitarian vulnerability and economic distress that this reality represents, added what looks like a further downturn in relationship in the days ahead.

Among the players in Kathmandu and New Delhi, the Nepal Government of KP Sharma Oli is a hodgepodge of political parties with irreconcilable positions. It has been brought low by the difficulties in implementing the new Constitution, giving momentum to post-earthquake reconstruction, challenging the syndicates seeking to establish crony capitalism, and reviving the economy/development. This has led to despondency among the people.

According to the gentleman’s agreement with Sushil Koirala, Oli was to have led the joint coalition government after constitutional promulgation. Left adrift after the NC reneged, Oli has had to lead his motley cabinet with false bravado and loud promises. His singular achievement was the agreements in Beijing on connectivity. However, there is no replacement to having a stable, confident relationship with India.

The other main actor is New Delhi’s external relations establishment, whose activities in Nepal are mostly the subject of rumour, conjecture and some evidence. But the hyper-activism that started when MEA-India ‘noted’ the Constitution’s adoption in September is lost on no one.

The ideal situation would be for India’s political leaders to set Nepal policy, and diplomats to implement it. But it is impossible to find out what is going on amidst the competing and complementing Indian actors on Nepal, represented by the rash of acronyms – the PMO, NSA, RSS, BJP, MEA, IB and R&AW.

We would really like to know who is calling the shots on Nepal, and whether the intelligence tail is wagging the dog as seems to be the case. For decades after 1950, Kathmandu’s democratic elders had direct and personable access to India’s ruling class, but that line ended with the passing of Girija Prasad Koirala. Today, Nepali politicians scrabble to be influenced by second-rung diplomats and apparatchiks.

There is really no evading the inordinate Indian activism on Nepal, by whichever entity – the power plays in Kathmandu, involvement in plains politics, micro-interest in governmental and constitutional appointments, and activism on government formation and collapse. Shrouded as it is in deniability, one does not even know whether India’s hyper-activity in Nepal is a part of implementation of articulated strategy or whether it is the whimsical product of unaccountable entities.

And so, what led to the five-month blockade, whose responsibility the plains-based parties were made to shoulder? It could have been the result of unintended consequences, of Modi’s PMO tuning off, an attempt to influence the Bihar elections, irritation at Nepal not having been declared a ‘Hindu state’, or the need to have provincial delineation of the kind that New Delhi wanted...

Conceding that it is the progressive pusillanimity of Kathmandu’s political class – including civil society – that has brought us here, it is nevertheless important for New Delhi to wake up to the fact that Nepal is headed towards layered crises. And it has contributed to the instability which is set to spiral out of control, impacting Nepal and Nepalis, but the blowback to India will not be insignificant or pleasant.

Prime Minister Oli’s penchant for impromptu and unbelievable declarations mostly harm his personal credibility. But for the sake of the polity as a whole, it is vital for him to urgently improve the tone of GON’s engagement with New Delhi. Regardless of the provocations, the nature of which have not been shared with the people, the cancellation of President Bidya Devi Bhandari’s trip to India and the recall of Ambassador Deep Kumar Upadhyaya both lacked diplomatic decorum.

The spat between the Nepali and Indian states should never be allowed to descend to the people's level, which would leave those on the ground vulnerable to opportunists on both sides. Indian citizens in Nepal and Nepali citizens in India will be vulnerable. To take the example of ‘Nepalis’ in India, there are at least three million citizens of Nepal living and working there, economically and socially exposed. Further, there is no saying that Indian citizens of Nepali origin would not be buffeted by the Nepal-India downturn.

One must demand that the Indian state revert to a bilateral diplomatic relationship as guided by the PMO and implemented by MEA. Meanwhile, issues related to the implementation of the Constitution should be left to Nepali forces within and outside Parliament, minus external mediation or instigation.

As for the Nepali state, it is urgent that the Oli government send a special envoy of unquestioned stature and credibility to New Delhi to meet key political leaders and try and stabilise the relationship. Otherwise, we will continue to have to live amidst rumours and conjectures, and the bilateral relationship will be dragged to a further depth.

A Nepali dance master is teaching them how to shimmy and shake in Edinburgh.

No one won, everyone lost

Nepalis have never before faced such deprivation and insecurity.
ANALYSIS by RAJENDRA DAHAL

For a time, we were all Americans. Not any more.
DANIEL LAK

We should know more about victims than their numbers.
DANIEL LAK
Wow! It namely likewise fine treatise about JavaScript, babyliss pro curler I dissimilar Your post doesn't acquaint any sense. ray ban outlet uk if information are defined surrounded sketches one can effortlessly be versed with these. hollister sale I think a visualized exhibit can be better subsequently simply a effortless text, chanel espadrilles for sale that why it gives you improved quality. getnjloan.com Can you amuse forward me the code for this script alternatively interest distinguish me surrounded detail among relation apt this script? Vivienne Westwood online get a babyliss perfect curl Very soon this network sheet longing be outstanding among all blog viewers, isabel marant sneakers saleI too prefer Flash,