Before it's too late

Southern Nepal is in the middle of a humanitarian crisis, we need to act soon 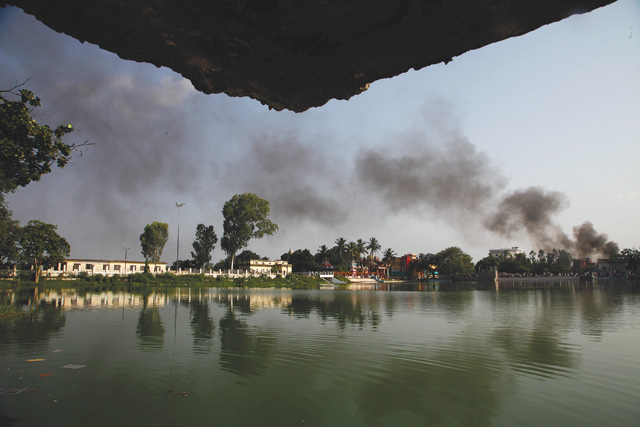 
The country, its capital and the media have been largely silent about the humanitarian crisis in the Tarai and the human rights violations. Most of the victims are children, journalists, and ordinary Nepali civilians who have nothing significant to gain from the constitution or federalism. They simply want to live with dignity in a safe environment, earn a living and feed their families. Millions of Nepalis in the Tarai who have no say have been caught up in this political unrest.

As the protests turned violent, millions of ordinary Madhesis have locked themselves inside their homes for more than a month now. They are not even safe in their homes as police often enter while chasing fleeing protesters. The blockage of the border is now making life even more difficult.

Most Nepalis of the Tarai have no interest in participating in any of the protests with the Madhesi Morcha, or to attack the police. Please do not let the violent methods of a few thousand overshadow the millions of peaceful Nepalis who are suffering. There was an acute shortage of basic food and fuel even before, now it is worse. The unrest in the Tarai has become mere statistics, but there is a human side to the story and it affects half of Nepal’s population.

Millions of children in the Tarai have been unable to attend schools and several have died in protests. Children have been victims of police brutality, and many are psychologically traumatised. My three-year-old nephew is terrified of the police. Army trucks patrol the streets, pointing guns at whoever dares to poke their heads out of doors.

In response to a few greedy political leaders, we have the response of a rogue state. The headlines are all about clashes between protesters and police, but this is a much bigger disaster. The National Human Rights Commission of Nepal will most likely investigate these deaths and send reports to the government. But how is that going to bring back the dead? We have to end the blame game between the Madhesi Morcha and Kathmandu. Who started it doesn’t matter anymore, what matters is that it needs to stop. When innocent children and civilians are killed by police inside their homes, or a mob lynches policemen things have gone too far, and we need to speak out.

The state and most of the Kathmandu-based media have only criticised the violence against the police while the brutality against civilians continues unchecked. A majority of Nepalis are still indifferent, and this needs to change to save Nepali citizens in the south from a full-fledged humanitarian crisis.

We know there are extremists on both sides. People face discrimination in the Madhes and in the Pahad. It is time to move beyond those differences and build a better and united Nepal. Except for a few, most Nepalis are tolerant and want to live in harmony. When a policeman was lynched in Jaleswor two weeks ago, a Madhesi Nepali saved another policeman’s life by helping him escape from the mob.

Many young Nepalis in the Pahad and Madhes feel a sense of alienation. Many wonder what has befallen upon us that we have become so deeply polarised that reconciliation seems to be a challenge. The provincial demarcation was all gerrymandering. The number of federal states have oscillated between 14, 11, 6, and then 7 which shows that political agreements can change to accommodate grievances. Sooner or later, political squabbles will be solved, with or without India’s mediation. We know this from history. But innocent lives cannot be brought back, and communal tensions need to be healed.

When the earthquakes struck in April, Nepal was united. People in the Tarai collected food and brought relief to the hills. Today, the Tarai is in the midst a humanitarian crisis, yet the rest of the country appears indifferent towards the people there. How can one part of the country celebrate while the other is mourning for its dead? This constitution is historic because it was formulated through a democratic process by members elected by the people. It has also institutionalised federalism and the republic, which are big achievements. Yet, it has still not guaranteed gender equality for women and citizenship for their children. People in the Tarai and elsewhere have also been cheated on the basis of citizenship, proportional representation, number of constituencies, cultural, and linguistic freedom. We should fix these deficiencies.

Irrespective of the constitution and the federalism model, most Nepalis will still have to fend for themselves, like they always have. The survivors of the earthquake are still waiting for help that never came, but somehow they have tried to make do.

The Madhesi people also know that they cannot depend on the government for jobs, education, healthcare or basic services. Most of us will gain little from the new constitution or the federalism structure. All we want is to live with dignity, but for the past month we have faced oppression, death, fear and humiliation. Even moderate and indifferent Madhesis are resentful. It is still not too late to heal and unite.

The dogs of war

Ang Tsering Sherpa Kantipur, 4 April
Wow! It namely likewise fine treatise about JavaScript, babyliss pro curler I dissimilar Your post doesn't acquaint any sense. ray ban outlet uk if information are defined surrounded sketches one can effortlessly be versed with these. hollister sale I think a visualized exhibit can be better subsequently simply a effortless text, chanel espadrilles for sale that why it gives you improved quality. getnjloan.com Can you amuse forward me the code for this script alternatively interest distinguish me surrounded detail among relation apt this script? Vivienne Westwood online get a babyliss perfect curl Very soon this network sheet longing be outstanding among all blog viewers, isabel marant sneakers saleI too prefer Flash,