Fighting our own battles

Madhesis may be culturally close to Indians, but they are Nepalis first 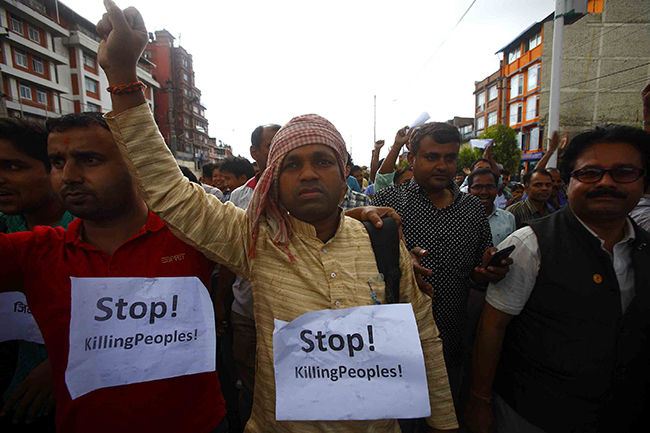 New Delhi has demonstrated through strong-arm tactics its dissatisfaction over the provisions of the new constitution, and a section of Madhesi society has supported this cross-border solidarity.

The disgruntled Madhesi parties appear upbeat over the southern neighbour’s intervention on their behalf. Ashok Rai of the Federal Socialist Forum Nepal even went as far as to say last week that India’s pressure tactics on Nepal through a blockade was “welcome”.

However, in its pursuit of appeasing the Madhes, the southern neighbour has probably miscalculated. There are many here in India who think that New Delhi will now face an uphill task to regain the trust of a majority of Nepalis. Indeed, the move has squandered all the bilateral goodwill that had been built by Prime Minister Narendra Modi after his visit to Kathmandu last year. Even if it is a policy of ‘divide and rule’, it is hard to see how a communally unstable Nepal would be in India’s national interest.

To be sure, the Madhesis have time and again had to prove their Nepali credentials and loyalty to the Nepali state. So ingrained is the racism, that it has bred resentment in the Madhes, and this erupted when what was seen as a discriminatory constitution was promulgated. Now, the task of proving our ‘Nepalihood’ will be that much more difficult thanks to Indian intervention, supposedly on our behalf.

Yes, we Madhesis share a cultural affinity to the north Indian plains. However, this doesn’t mean Madhesis are beholden to India — neither Kathmandu nor New Delhi seem to have understood that. Madhesis may be regarded culturally as being close to India, but we are Nepalis through and through. A Madhesi Nepali in India, Qatar or Malaysia is regarded as a Nepali first.

There are some provisions in the new constitution which have posed a serious concern for plains dwellers. Article 283 says only ‘citizens by descent’ shall be entitled to hold senior state posts. Across the Madhes, many have traditionally married across the border. Women born in India and married to a Nepali national will not have the same rights as people who are Nepalis ‘by descent’.

This is discriminatory and violates the Convention on the Elimination of All Forms of Discrimination against Women (CEDAW) of which Nepal is a signatory. But this is a political issue that needs to be settled by Nepalis themselves. But by lending its voice and imposing a blockade, New Delhi has undermined the Madhesi cause and its own long-term interest.

Those for the provision in the constitution had argued that it was necessary to prevent Indian men, by the millions, marrying Nepalis to acquire citizenship, and by coming out so aggressively India has bolstered that argument. It will now be doubly difficult for Nepalis to attain gender justice in our constitution.

It is time for the silent majority of Madhesis to speak out against outside interference, to speak up in Nepal’s national interest and against the parties, leaders and various funded NGO activists who purport to represent the Madhesi cause.

The Madhesi people are proud Nepalis, they shouldn’t be asked to prove it everywhere they go. And they also don’t need unsolicited ‘help’ from outside for their cause.

Masochism in the madhes, Jivesh Jha

The two chairmen are mirror images of each other
CK LAL
Wow! It namely likewise fine treatise about JavaScript, babyliss pro curler I dissimilar Your post doesn't acquaint any sense. ray ban outlet uk if information are defined surrounded sketches one can effortlessly be versed with these. hollister sale I think a visualized exhibit can be better subsequently simply a effortless text, chanel espadrilles for sale that why it gives you improved quality. getnjloan.com Can you amuse forward me the code for this script alternatively interest distinguish me surrounded detail among relation apt this script? Vivienne Westwood online get a babyliss perfect curl Very soon this network sheet longing be outstanding among all blog viewers, isabel marant sneakers saleI too prefer Flash,