From subjects to citizens 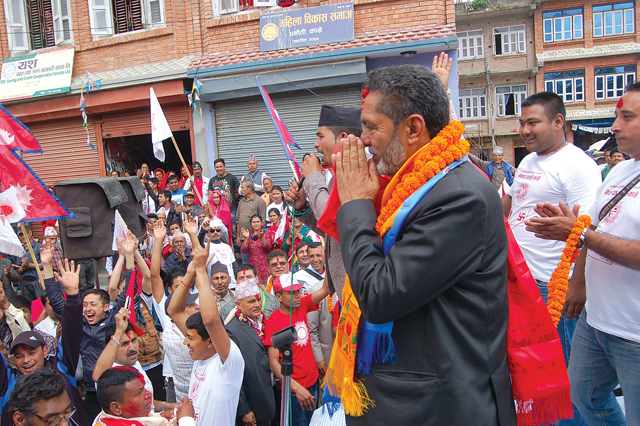 For too long in Nepal, local-level needs have been set aside, first to cope with the insurgency during the 1990s and then to implement the transitional political process that followed the comprehensive peace accord in the late 2000s.

During the decade-long transitional period ending in September 2015, Nepal’s interim Constitution sought to ensure that all political parties had a say in governing the country, while a final political settlement was being negotiated around a new Constitution. However, the cacophony of interest groups represented by the multitude of political parties caused political instability and policy volatility. As a consequence, sub-national governance was grossly neglected. Disasters like the earthquakes of 2015 have laid bare the tattered remains of government at the local level, where centrally orchestrated relief and recovery mechanisms have heaved and strained for two years to help survivors. Local elections come at a time when the gap between state and society is critically wide.

Over the past two decades, this distance from Kathmandu has been exacerbated by the alienation of Nepalis from government because of a dysfunctional process of consensus politics that has percolated from national to local levels. From the dividing up among local party elites of block grants meant for local development and party-based appointments of public servants at all levels, to impunity in policy decisions and criminal neglect of those who suffer, the perverse results of this political process manifest daily in stupefying actions that serve the narrow interests of a tyrannical minority who have usurped representation of the Nepali public.

While this minority’s credibility is in shambles, their legitimacy will be tested in ongoing local elections and constitutionally-mandated provincial and national elections later this year. It is unsurprising that independent candidates and those from newer parties have done relatively well in the first phase of elections held on 14 May.

Of these three elections, the local polls are perhaps the most salient, not least because of constitutional provisions that allocate significant unconditional financial support for the newly-elected local governments. Although put off for 15 years (local elections should have been held every 5 years), there is a promise in these polls that surpasses the exercise of electoral choice by millions of Nepalis.

To be able to choose from among their own communities a fresh cohort of representatives who are empowered through jurisdiction and funds to serve their own local needs is certainly part of that promise. However, the exercise of choice through elections is alone insufficient for productive democratic politics and democratic citizenship.

For these elections to deliver more than a set of local elites schooled in collusive, extractive behaviour by their Kathmandu-based patrons, it’s critical that Nepalis reconnect individually and associationally in civic artisanship in their local political communities. That is to say: Nepalis have to move beyond just a commitment to the common good and public service expressed through participation in elections. They must also regularly and consistently participate in a form of politics that centres on public problem-solving, recognises and clarifies legitimate interests, and, through broad civic initiative, constrains the process of elite domination.

There are many lessons from efforts at self-governance in Nepal (community groups engaged in forestry, irrigation, micro-hydro, etc.) that can illuminate how to collaborate with local government to achieve beneficial outcomes. These were durable civic initiatives that encouraged the public to together frame community problems, align individual interests with group interests, craft their own rules of association and collaboration, monitor and penalise rule-breakers, and partner with local authorities to agree mutually productive outcomes at least cost to all.

We failed to adequately recognise and institutionalise these valuable lessons. Thus, while for a brief period in the 1990s Nepalis did lead the world in demonstrating how communities could govern themselves, the transformation from a longstanding, state-sponsored political culture of ruler-subjecthood to that of accountable citizenship was given neither sufficient attention nor consistent and balanced support.

Fresh competition and negotiation among a multitude of local governments and between provinces in the restructured governance order brings additional challenges. Clearly, placing citizenship at the centre of this new order will require going beyond the idea of citizenship as a form of membership, to be constantly kicked about as a political football between those who seek and those who deny equality, for example. Or by those who think the provision of rights and the execution of duties is the standard for measuring accountability and political progress.

After these local elections and into the future, how do we attain a state of political engagement where citizen-mayors and citizen-publics both work to reform and improve their political community? How will accountability get co-produced by both instead of being demanded by one and supplied by the other? Dedicated effort and investment are required to promote civic capacity, culture and agency such that the Nepali public reset their connection with the state. Only then will res publica become more than just part of Nepal’s new title.

No turning back, George Varughese

Uncle Dahal and Uncle Sam
Wow! It namely likewise fine treatise about JavaScript, babyliss pro curler I dissimilar Your post doesn't acquaint any sense. ray ban outlet uk if information are defined surrounded sketches one can effortlessly be versed with these. hollister sale I think a visualized exhibit can be better subsequently simply a effortless text, chanel espadrilles for sale that why it gives you improved quality. getnjloan.com Can you amuse forward me the code for this script alternatively interest distinguish me surrounded detail among relation apt this script? Vivienne Westwood online get a babyliss perfect curl Very soon this network sheet longing be outstanding among all blog viewers, isabel marant sneakers saleI too prefer Flash,