Evil, in the end, did not win, each survivor of the Holocaust is a living hero 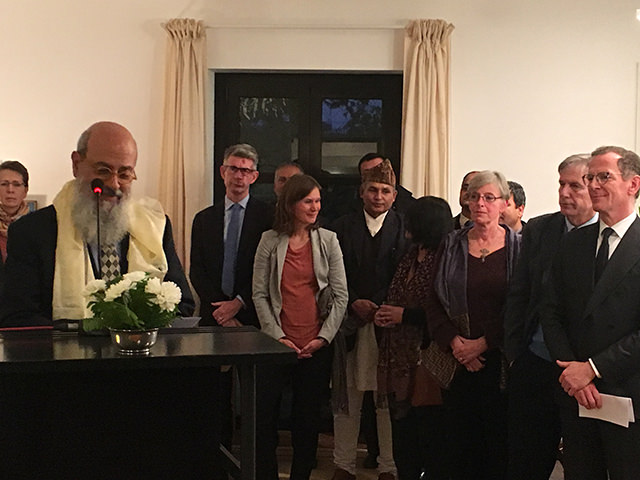 From 1933 to 1945, six million lives were wiped out because they were Jews. Hundreds of thousands of others were also killed or imprisoned, because they were Roma, Homosexuals, Communists or living with a handicap.

The only link between these very different victims was the need to blame a scapegoat for whatever was perceived to be wrong, and the nauseating theory that the so-called dominant race which had to be kept pure. That was how the Nazi dictatorship could continue to thrive.

The International Day for the Commemoration in Memory of the Victims of the Holocaust is also a day on which we, the Germans, look into Germany’s loss. Authors and artists were lost, because they were German and Jewish. This loss is also the loss of the other nations which were conquered by the Nazi Germany – Poles, Czechs, Slovaks, Hungarians, French, Greek. With them, I mourn today those of the neighbours, classmates, colleagues of these times who were German and Jewish. I mourn those ordinary people whose sons and daughters and grandsons and grand-daughters who should be with us today.

This is also a day of honour and of victory to be able to welcome Israel’s Ambassador to Nepal, Benny Omer, to my residence. It creates an immense honour for me, the ambassador of Germany. It is not for me to qualify this act of forgiveness, but it is a victory for myself, for Germany, and for us who believe in humanity. The evil, in the end, did not win. Each survivor is a living hero. 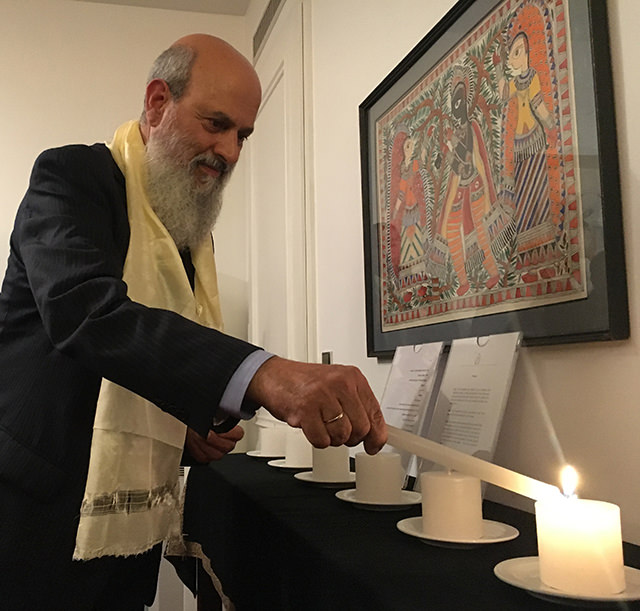 Israeli Ambassador to Nepal, Benny Omer lights the first of six candles commemorating the 6 million Jews killed by the Nazis during the Second World War at a function at the Germany Ambassador Roland Schäfer's residence.

The United Nations is a product of World War II, and it is one of the great lessons learned. The state of Israel has initiated this UN commemoration, and rightly so. Germany will always welcome Israel in the community of States, always defend the right of Israel to exist and to strive for peaceful relations with its neighbours. The European Union, too, is a direct consequence of the horrors and errors leading to the Second World War.

The Germany which I represent and serve, the Germany of today and of tomorrow, is a European Germany. This is a lesson Thomas Mann, one of the greater of our writers drew in the 1950s: We never again can attempt to create a German Europe, he wrote. What we need is a European Germany instead. Through the European Union we achieve this goal. Let me stress that the European Union is a successful peace project because it is something totally new, never heard of before and never tried before in what we describe as human history. We adhere to the European Union, a living, powerful reality among the States of this world.

This day of commemoration is marked all over the world, but here in Nepal, it may take on a specific significance. Although the Holocaust is a unique tragedy, and although it would be unethical, unhistorical, and foolish, to compare what happened there with other conflicts, we can, however, relate to how people cope with conflict. We can understand bereavement, guilt. We can relate to their claim for justice. Not in the ‘what’, but in the ‘how’ – that is where lessons may be learnt. 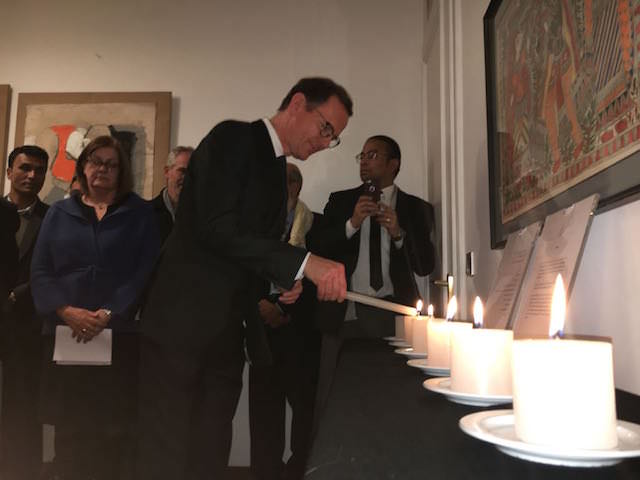 German Ambassador Roland Schäfer lights one of the six candles commemorating the 6 million Jews killed by the Nazis during the Second World War at the Ambassador's residence to mark International Holocaust Memorial Day.

Nepal has its victims - so many have to cope with their loss, their sorrow, the pain, and the anger. We think of them and we relate to them, not just because of their individual fate, but also because today, we remember how immensely humanity in its entirety can suffer, if the claims for truth, justice and reconciliation do not find adequate responses.

Nepal has its heroes, too: those who successfully struggle to get to the voting booth, who continue to believe and who keep engaging in the fight for democracy. I specifically think of all the ordinary people, who do the jobs of heroes. One of them is Mira Katwal from Udaypur, who is now sitting upright in a hospital bed in Kathmandu, with her leg lost to an bomb attack while she was serving her party, but her mind and spirit intact and combative. We should think of them, too, on a day like this.

And Nepal has its future in those every day heroes who create a Nepal which is unique and new: a democracy, not imported but created here, in its unique fashion. They make those who are elected to find the wisdom, the listening capacity and the courage to come up with credible solutions which point towards the future.

With this future, Nepal is already now holding its place among the nations of the world.

Excerpts of speech delivered by German Ambassador to Nepal Roland Schäfer to mark the International Day of Commemoration in Memory of the Victims of the Holocaust on Tuesday at his residence in Kathmandu.