Tsering Dolker Gurung
Nothing brings Nepalis closer than their mutual distrust of the Indian state. Shortly after India’s Ministry of External Affairs released a statement (its second within 24 hours) on Nepal’s new constitution, thousands took to Twitter on Monday to express outrage over what they saw as New Delhi’s  overbearing attitude.

The #BackoffIndia hashtag seems to have piggybacked on a Pakistani Twitter campaign against India and by Tuesday it was trending worldwide, by Wednesday the hashtag contained more than 200,000 tweets. The only other time Nepalis collectively tweeted on something that trended worldwide was in criticism of another Indian institution: its media for insensitive, over the top coverage of the April earthquake. 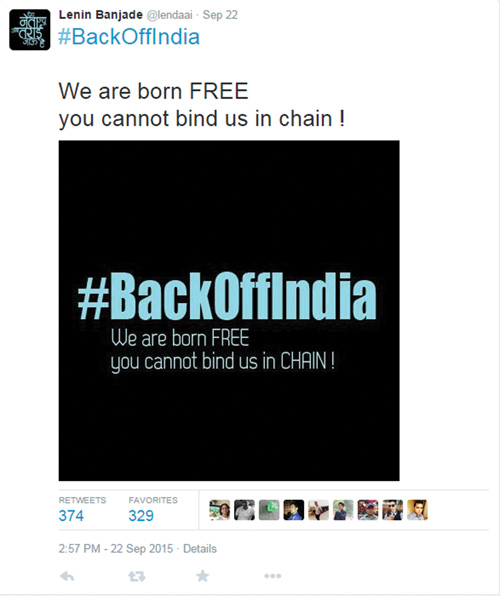 But do hashtags actually result in real change? Can they transcend from being only virtually existent to having a ground presence, or is their significance only limited to the cyberspace?

In case of Nepal, the past record is murky. None of the movements started online (#citizenshipthroughmothers, for intance) resulted in any concrete change. While Nepalis are relatively active on Twitter, neatly divided between activists, intellectuals and the politically opinionated who never refrain from having a go at one another, on the social change front we have not had any major success on the scale of movements such as #Blacklivesmatter, #Umbrellarevolution and the Arab Spring.

Many may argue that the success of an online movement should not be measured only on the basis of tangible change, but also on its role in initiating dialogue on issues that are not getting the kind of coverage in the mass media that they should. Social media campaigns also help to ease communication among various groups, foster coordination, and create a mass outreach.

Worldwide, online movements have turned into real change bringers. The most noticeable hashtag of recent years has been the #Blacklivesmatter which was started by three young black Americans in response to the acquittal of George Zimmerman, who shot and killed teen Trayvon Martin in 2012. Since then the hashtag has been used to speak out against systemic racism and police brutality. Although the campaign began without any leaders, today it is a well-organised movement spread out across the United States, fully devoted to the cause. These are all young, tech-savvy activists who have a large following on social media.  When the #Blacklivesmatter campaign picked up again after a jury decided not to indict an NYPD officer who killed a black man, Eric Garner by putting him in a chokehold, protests erupted online. Thousands of tweets were registered within minutes of the decision, and prompted the attorney general to call a federal inquiry into the grand jury decision about the case.

Closer to home is the #Umbrellarevolution, a massive protest launched by Hong Kong democracy supporters last year to oppose the government’s decision to stop civil nominations of candidates. The hashtag not only brought thousands of protesters on the streets to demand a change in the rule, it also made people outside Hong Kong aware about it. Activism on the social web brought out young activists who gave the movement leadership.

This week also proved that Nepalis’ reach on Twitter is wide enough to make a topic trend worldwide. But having something trend on a microblog is different from real change in real life. Trending topics are also ephemeral just as the 140 characters are: here today gone tomorrow.