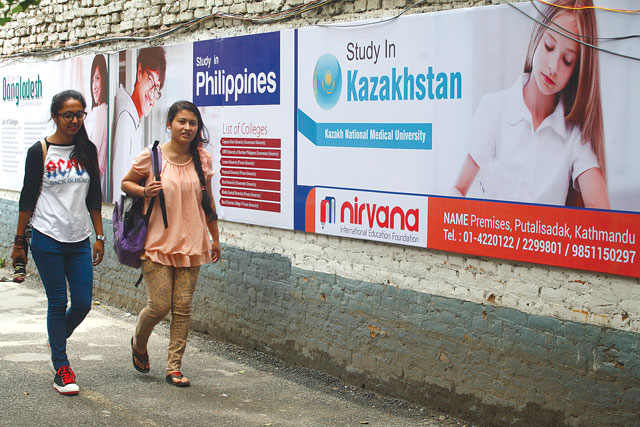 The sight of hundreds of mostly young men lining up at Kathmandu Airport’s departure immigration reminds us of the country’s dire economy that forces so many to migrate for work. But there is another less noticed aspect of migration.

Walk down Putali Sadak any morning and starting 6AM, there are thousands of young students pouring into the education consultancies that promise students visas to Australia, New Zealand, Canada or Europe. The billboards advertising classes for standardised tests and foreign languages mostly feature Caucasian faces.

Many are fly-by-night outfits charging hefty fees with no guarantee that students get admitted, exploiting the desperation of many Nepali parents to send their children abroad because being a student is the easiest way to obtain a visa to North America, Europe or Australia.

Going abroad to study used to be the nearly exclusive privilege of Kathmandu’s well-to-do, today it’s turned into just another conduit for out-migration. As per estimates more than 200,000 Nepalis aged 18-24 have left the country in the past 10 years. So far this year the Ministry of Education has received 29,000 applications for ‘no objection’ letters required for a student visa – double the number for the same period last year. And that does not include students going to India. Altogether there is an outflow of Rs 30 billion annually to pay for college fees and expenses.

Nepalis are going abroad for higher studies because university education here is so uncertain, but what is worrying is that only less than half of the students return to the country on completion of their studies. That may not necessarily be a bad thing: they get an opportunity, so what?

But like migrant workers to the Gulf, Malaysia and Korea who despite bearing the brunt of government apathy help contribute 25 per cent of the country’s GDP and ultimately return, many of these students are actually migrating for good and many stay on illegally to work in the hope that they can turn their status to permanent residents. The government, instead of upgrading the quality of higher education or create jobs to keep young Nepalis here is just happy that they send money home.

There are the occasional success stories about Nepalis achieving brilliance in their field abroad that makes us all beam a little with pride, but those are few and far in between. It is not different than finally finding a Nepali household help who is treated well by her employer in Lebanon, or the wonderful experience a Nepali worker has in Qatar where he is lucky to have a kind-hearted boss.

A large population of Nepali students going abroad don’t always end up living the dream. A boy in his 20s from Kathmandu committed suicide last year after learning that the college he had applied to in UK had been blacklisted. Kathmandu-based consultancies sent 300 students to a college in Malaysia that didn’t even have an education license.

And when authorities turn a deaf ear to their pleas, the students use social media to send out distress calls. When 34 Nepali students who were promised British certificates and a lucrative job at the end of the degree by a college in Mauritius realised they had been duped, the group made an emotional video and posted it on YouTube. “Our money is running out, soon we won’t have much to eat. We just want tickets to go home and refund of our fees,” said one.

The families of most of these students have sold ancestral property to fund their education, but many quit their studies mid-way because they simply can’t keep up with paying tuition working part-time jobs. A greater number of students fund their own education with only few going on full scholarships. And that leads to a domino effect. When they can’t continue their studies, they lose their visa status and are left to work illegally.

This is not the picture painted by educational consultancies that dot New Baneswor or Putali Sadak. The posters give the impression students will be on vacation, posing in front of the Sydney Opera House. Like manpower agencies that exploit the desperation of migrant workers, a large number of these institutes take advantage of naïve Nepali boys and girls who see no opportunity here.

A chance to study abroad can turn a student’s life around, but only if there is no pressure to make money or worry about not being able to pay bills. Unfortunately that’s not the case for a majority of Nepali students leaving the country by the hundreds every day.

Ahmed Ziauddin of the Asian Network for the International Criminal Court.

Why isn't the government promoting electric cars by giving them tax breaks?
KUNDA DIXIT
Wow! It namely likewise fine treatise about JavaScript, babyliss pro curler I dissimilar Your post doesn't acquaint any sense. ray ban outlet uk if information are defined surrounded sketches one can effortlessly be versed with these. hollister sale I think a visualized exhibit can be better subsequently simply a effortless text, chanel espadrilles for sale that why it gives you improved quality. getnjloan.com Can you amuse forward me the code for this script alternatively interest distinguish me surrounded detail among relation apt this script? Vivienne Westwood online get a babyliss perfect curl Very soon this network sheet longing be outstanding among all blog viewers, isabel marant sneakers saleI too prefer Flash,