China cannot alleviate the pain inflicted by India on Nepal, let’s look within and mend fences 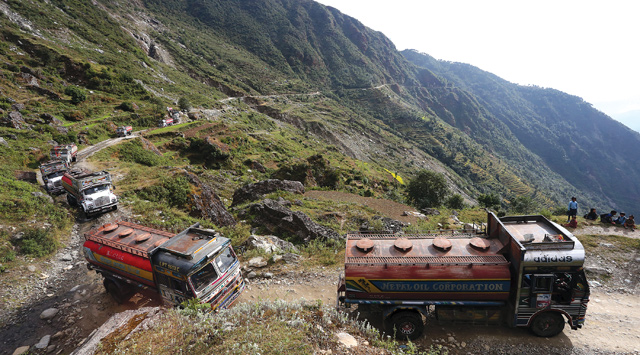 
As a fleet of Nepali oil tankers negotiated its way through a precarious road along the Bhote Kosi from Tibet, through Rasuwa (pic) and into Kathmandu this week, the denizens of Kathmandu imagined an end to their misery.

Tanker drivers were greeted like heroes with garlands, and they said how proud they felt to be able to help lift the motherland out of a crisis.

But the euphoria was short-lived. Nepalis realised that importing fuel from across the Himalaya is more difficult than first thought and the celebration was muted. More tankers will arrive in the coming days, but when, no one knows for sure. The Kerung Highway will be closed due to snow soon, and the Kodari link is badly damaged by the quakes.

Like it or not, Nepal cannot rely on any other country but India for the commercial import of fuel at least in the near future. So Kathmandu needs to look south and within to find a political solution to this long-drawn crisis.

Foreign Affairs Minister Kamal Thapa’s visit to India last month failed, and Kathmandu seems to have made up its mind that further negotiations with New Delhi would be meaningless for now. The recent Nepal-China petroleum deal was not a manifestation of Kathmandu’s tilt towards Beijing, but a symbolic move. This is not how it should be. Negotiations are needed with agitating groups and their Indian mentors.

The Madhesi parties have been the camouflage allowing New Delhi to deny there is a blockade on Nepal. There was forward movement in talks in Kathmandu between them and the government, but the Birganj violence on Monday has stalled those negotiations for now. Home Minister Shakti Basnet ordered police to chase away Madhesi protesters from the Birganj-Raxaul border on Monday morning. That was a mistake.

The Madhesi Morcha has now threatened to pull out of talks, calling them a “ploy” by the government. India, angry over the death of ‘an innocent youngster from Bihar’, hinted at further tightening of the blockade. If that happens, neither the government nor the country will win. The people’s suffering will continue.

Since the days leading up to the promulgation of Nepal’s new constitution, India has been reiterating the need for ‘broad-based consensus’. But consensus is not possible if the Morcha rejects talks and tries to bring the government to its knees through street protests and the blockade. The government could respond with a sincere apology as a first step to resuming talks.

This is also time for the ruling parties to be honest about those of the Morcha’s demands that they cannot address. Nearly three months after it began an indefinite strike in the Tarai, the Morcha on Sunday unveiled its 11-point demand, foremost among which is the creation of two provinces in the southern plains. This is not possible because of the danger of widespred violence, and the government should convince the Madhesi parties about the same.

The Morcha is an alliance of four Madhes-based parties, none of which fared well in the last Constituent Assembly (CA) elections in their own strongholds in the central Tarai. Surprisingly, they are now claiming Jhapa, Morang and Sunsari in the east and Kailali and Kanchanpur in the far west as parts of two plains provinces.

The Morcha does not represent the people of these five disputed districts. The four members of the Morcha collectively received 12,902 of the total 344,963 (just about 4 per cent) valid votes cast in Jhapa under the Proportional Representation system in 2013. None of its candidates won in any of Jhapa’s seven constituencies under the First-Past-the-Post system, and most of them failed to secure even their deposit money. In many constituencies, the Morcha members have received fewer than 20 votes.

Even if all this is ignored, other regional parties demanding a Limbuwan province will not agree. For the sake of a compromise, these districts can be divided and boundaries of the two plains provinces expanded. But the Morcha should spend more energy on constructive negotiations rather than exploring even more sinister ways to weaken the country and hurt its people.