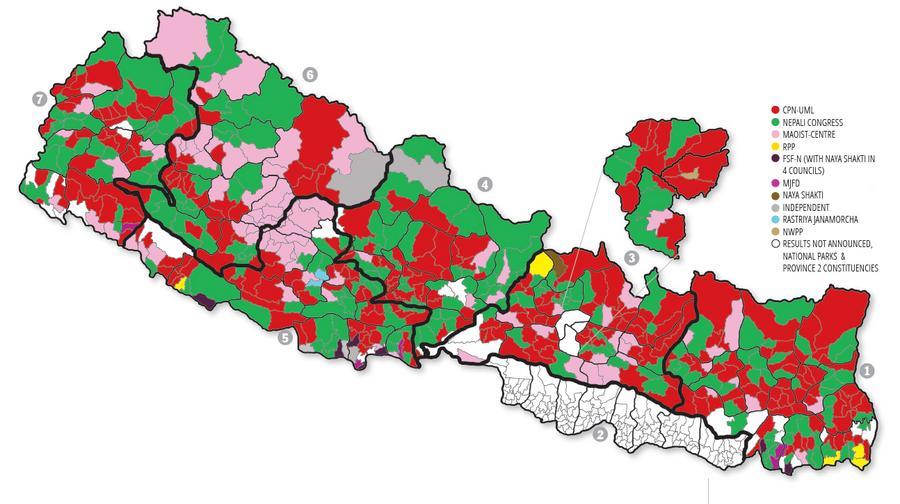 The verdict is out. The UML is the largest party after the second phase of local elections.

Only Province 2 now remains without elected local governments. The big questions are: Will this overwhelming vote in favour of elections elsewhere prompt the Madhes-based RJPN to reconsider its course? Will the UML become even more unilateral in rejecting an amendment to the constitution? How will the Nepali Congress make up in Province 2?

How the UML reads this success will largely determine Nepal’s future political course. Madhes-based analyst Chandra Kishore says: “The UML should not gloat and become even more nationalistic. If it keeps being arrogant, the current crisis will drag on.”

After defeating the NC by 21 seats and the Maoists by 79 seats in the first phase of local elections in May, the UML has widened its lead over the two ruling parties in the second phase last week (see chart, above) to head 267 out of 744 local councils. At press time Thursday evening, the UML was leading in 8 out of 15 constituencies still being counted. 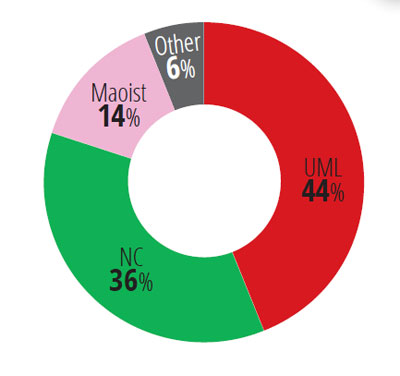 The Maoist-Centre and NC which toppled the KP Oli government last year are unlikely to catch up with the UML even after the final phase of polls in the remaining 127 municipal and village councils of Province 2 in September.

What is surprising is that the UML pulled off astonishing victories even in some Madhesi constituencies. In Tikapur, where Madhesi leaders had instigated Tharu protesters against hill-based parties, the UML’s Tapendra Rawal became Mayor. In Province 5, where the Madhes-based RJPN cadres had contested elections as independents, the UML swept 11 councils.

The UML’s electoral success is due to its popularity among the elderly for the social security program. Being the best-organised party has given it grassroots reach. But it is the UML’s nationalist line against the Indian blockade which has resonated well in the mountain districts.

Upendra Yadav’s FSFN and Bijaya Gachhadar’s MJFD, the two Tarai-based parties that broke ranks and contested the polls, have won in only 7 and 6 places respectively so far. Yet, both are expected to get berths in the Deuba government. The RJPN’s independent cadres have won in two constituencies, and is seeing rifts as it decides to register at the Election Commission -- a first step towards participating in Province 2 polls.

Says Chandra Kishore: “The RJPN is showing flexibility. So should the UML. Otherwise there will be polls, but no political stability.”

If the quality of statistics in Nepal is dubious, then so are policies based on them
BISHNU DEV PANT

How far we lag behind

The poverty and inequality that gave birth to the conflict persist, says a UN report
RABI THAPA

Let's strengthen our collective entrepreneurial know-how for prosperity
ASHUTOSH TIWARI
Wow! It namely likewise fine treatise about JavaScript, babyliss pro curler I dissimilar Your post doesn't acquaint any sense. ray ban outlet uk if information are defined surrounded sketches one can effortlessly be versed with these. hollister sale I think a visualized exhibit can be better subsequently simply a effortless text, chanel espadrilles for sale that why it gives you improved quality. getnjloan.com Can you amuse forward me the code for this script alternatively interest distinguish me surrounded detail among relation apt this script? Vivienne Westwood online get a babyliss perfect curl Very soon this network sheet longing be outstanding among all blog viewers, isabel marant sneakers saleI too prefer Flash,