The shrine after which Kathmandu was named withstood many quakes in the last 900 years but came down in this one. 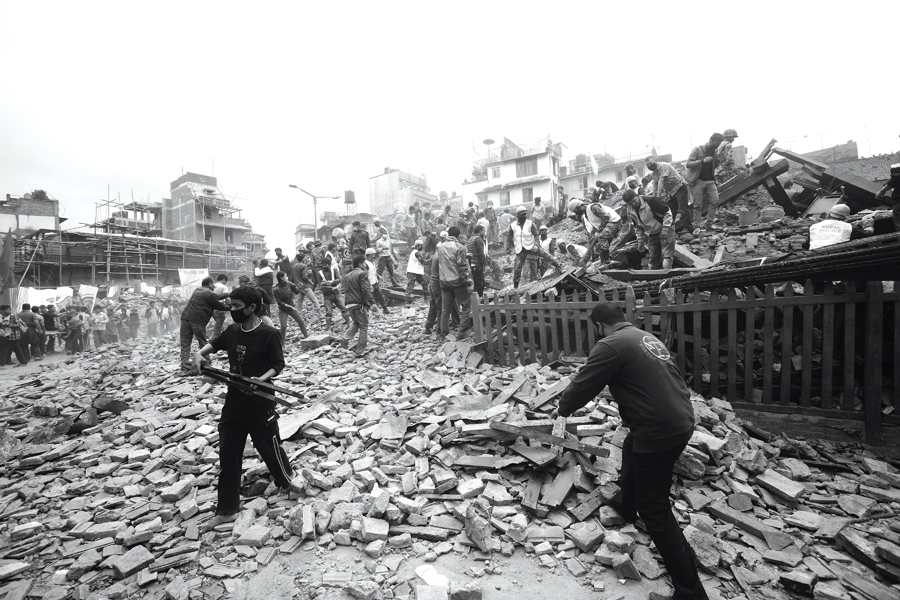 RELIC IN RUINS: Search and rescue teams dig through the rubble of Kasthamandap on 25 April, looking for survivors. Ten people were killed here.

Rabi Bhandari was lining up for a blood donation program organised by Nimbus Savings and Credit Cooperative that Saturday morning at the historic Kasthamandap. More than 50 other employees of the cooperative had also gathered for the event. Some of the women were reclined on chairs with IV needles stuck to their arms, others were chatting with colleagues when the wooden structure started shaking violently.

“Those of us at the edge of the building ran outside,” Bhandari recalls, “but when we looked back we saw that the whole structure had collapsed. Some of our friends who had been in the middle were crushed by the falling beams.” The shock and horror of that day and the grief of having lost so many friends is still writ large upon Bhandari’s face. Altogether 10 employees from Nimbus were killed.

“Bricks and mud started falling on us, and nearby temples began going down one by one,” Amit Awale told Nepal Samacharpatra. He went back into the ruins of Kasthamandap to rescue alive three others, including a nurse and two blood donors.

Besides the cost in human life, the destruction of the 900-year-old structure was also an enormous symbolic loss for the Valley’s cultural heritage. Kathmandu owes its name to Kasthamandap, which is said to have been originally made from the timber of a single tree, hence its name. It is also called Marusattal.

The first historical mention of Kasthamandap goes back to 1090 AD which makes the structure one of the oldest among the monuments of Kathmandu Valley – far older than Dharara which has dominated conversations about the loss of historical monuments in the April earthquake. 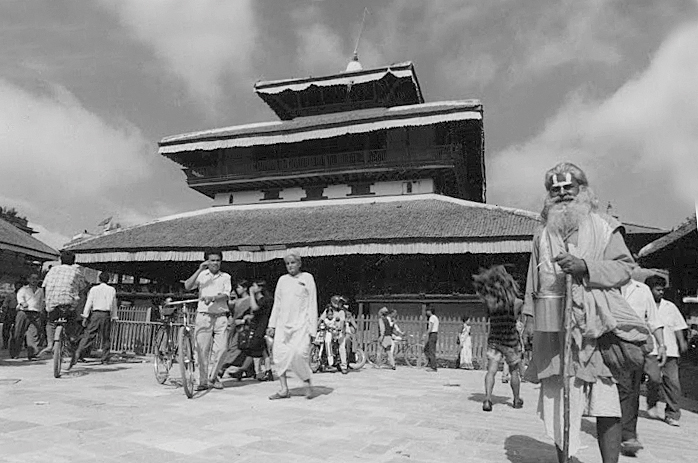 Kasthamandap was primarily a public pavilion, a rest-house which sat along two ancient trans- Himalayan trade routes as they passed through Kathmandu. Traders did not just rest here, but also stored their goods on their way to Tibet or India. They enjoyed the services of the Malakar flower sellers and Sarafi money exchangers, who even today neatly fill up Kasthamandap’s corners.

“While Hanuman Dhoka and other palaces were built for kings and the nobility and temples were dedicated to the Gods, Kasthamandap was built for the people,” says Bhushan Tuladhar, a heritage conservationist with UN-Habitat. Kasthamandap had a multiplicity of functions and was also a shrine for Kanphata Yogis, a group of holy, ear-piercing renouncers. The inside of the structure had priceless ancient copper-plated inscriptions, and a rare statue of Lord Gorakshyanath, which the Yogis say is the earliest among other figures in Gorakhpur and Gorkha. All these treasures still need to be rescued from under the ruins of Kasthamandap. 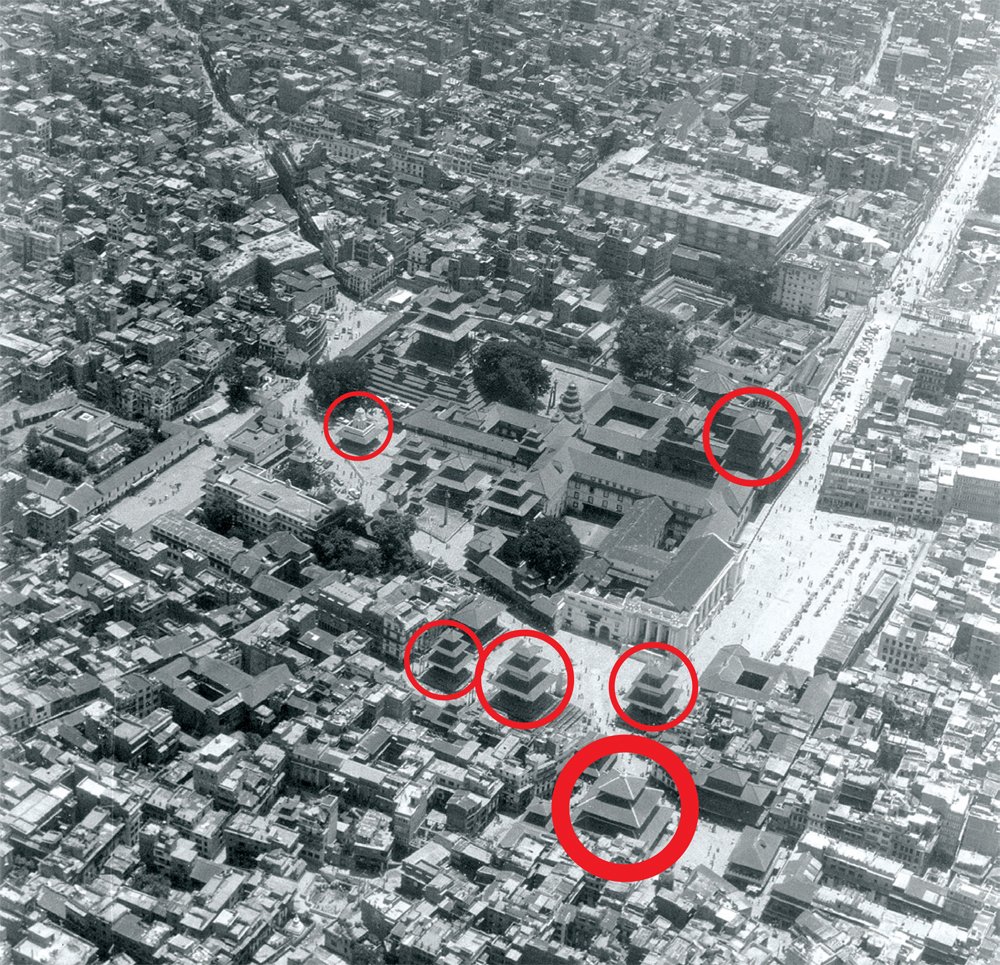 Aerial view of Basantapur Darbar Square, showing other temples that came down. In the thick circle is Kastamandap. Hover over for more photos.

Although the timber structure stood for a millennium, enduring massive earthquakes that have struck Kathmandu every 100 years or so, it didn’t survive this one. “It would not be right to call this building old and weak. Structures like Kasthamandap need to be maintained and repaired often,” says architect and urban planner Sudarshan Raj Tiwari. He adds it is possible Kasthamandap’s wooden joints were rotting away and simply could not support the weight of the building during the big earthquake. Kasthamandap was last repaired 50 years ago during the reign of King Mahendra, but that did not save it.

Yet, for a building with such historical and cultural significance, Kasthamandap has drawn less attention compared to other temples and shrines. For heritage documentarian Alok Siddhi Tuladhar, Kasthamandap was a memento from his forebears who were traditionally engaged in Kathmandu’s trade with Lhasa. “It is possible my ancestors also rested here, so whenever I pass through Kasthamandap with my children, I make it a point to tell them about its history and significance,” he says.

Nevertheless, efforts are underway to fundraise to rebuild Kasthamandap. Dipesh Risal, a Nepali in the United States has collected and published a trove of information on Kasthamandap in an effort to ease the reconstruction process (see sidebar, right). Last weekend two fund- raising events were held to rebuild Kasthamandap. One was The Heritage Cycle Ride and the other a marathon led by Baikuntha Manandhar.

Questions are now being raised about how true to the original material and design the new structure should be, or whether adding concealed steel or concrete reinforcements should be allowed. It is felt the project should be led by a government body and include historians, structural engineers, heritage experts and also religious groups for whom Kasthamandap holds special religious significance, like the Kanphata Yogis, who are already feeling left out of the discussions about their temple’s future. There are also pressing questions of how to protect and retrieve the copper inscriptions and figures buried under the rubble.

Says Alok Tuladhar: “It helps to see rebuilding Kasthamandap as really a part of the cycle of birth, life and death. Things, like people, rise up and come down. We must accept that and move on to rebuild this great monument of our history and culture.” 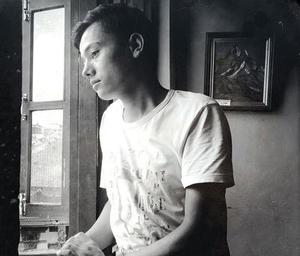 Suman Bhujel looks out the window at the vacant space where Nepal’s glorious Kasthamandap temple stood for 900 years. Suman is 18 years old and has studied up to Grade 8. He is from Binjel of Sindhupalchok where all the houses were destroyed. He had been working in Kathmandu at rooftop Kasthamandap View Restaurant when the earthquake struck on 25 April. He watched from above as the entire Kasthamandap structure collapsed. He was filled with fear and ran up New Road to the open spaces of Ratna Park and the Tundhikhel for safety. He is now back, and is going to work at the restaurant long enough to make the money required for a passport so he can head out to Dubai for work.

Photo and text by Kevin Bubriski

A heap of history 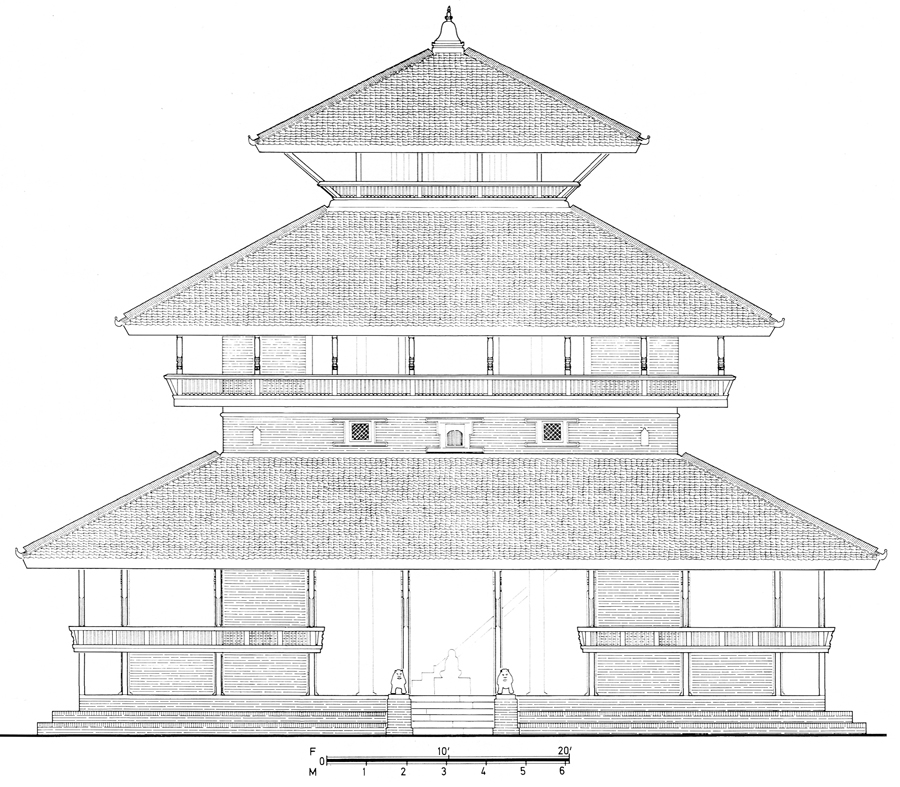 Kasthamandap is no more. What is perhaps almost as unfortunate is that a majority of Nepalis believe Kasthamandap was built many centuries after its actual construction. For this reason experts, journalists, and city-dwellers have not lamented Kasthamandap’s loss to a great extent.

But the fact remains: Kasthamandap, known locally as Maru Sattal was easily the oldest standing public structure of any kind in the valley, dating back to at least 1143 AD. While much of the building interior and facade was renovated over the intervening centuries, experts believe the large central platform (mandap) and the enormous four wooden columns most likely date back to the original construction.

The misinformation about Kasthamandap’s much younger age stems from 19th century Kathmandu vamsavalis, which without fail, and for some inexplicable reason, credit Laxmi Narsingh Malla (ruled 1621-1641 CE) for building the monument.

The rigorous Samsodhan Mandal had correctly established the antiquity of Kasthamandap more than 25 years ago in the book Itihas Samshodhamko Praman Prameya (Hyoptheses and Proofs from Historical Research). However, the incorrect later dating has been cited and perpetuated in many Nepali and Western publications, unfairly denying Kasthamandap the fame it deserves because it is ‘only about 400 years old’.

There is now talk about restoration of the more popular structures in Kathmandu Darbar Square (Upper floors of the Basantapur Tower, a devastating loss in itself, Trailokya Mohan, build at least 537 years later, and the iconic Maju Dewal, build at least 549 years after Kasthamandap). But few seem as concerned about Kasthamandap’s fall or about the makeshift tents that had been built right atop the uncleared and unsorted rubble more than a month after the devastating earthquakes.

Kasthamandap was a time-capsule of old Kathmandu, capturing with its six priceless copper-plate inscriptions and other treasures the existence of ancient townships called Yangal/ Yambu, the association with Pachali Bhairav, the rise and longevity of the Gorakshyanath cult, the gradual merging of local townships into the unified city-state of Kasthamandap (which is now Kathmandu), the rise of Nepal Bhasa as a state language, the long-standing Buddhist connections, the dual-kingship sometimes in effect during the Malla era, the continuation of centuries-old Licchavi system of coinage/weights, and the importance of guthi associations which are still so very relevant in Kathmandu.

Kasthamandap gave Kathmandu its name and its very identity. The sattal was at least 900 years old, and possibly more than a 1000 years old, at the time of the 2015 earthquakes. It was therefore the oldest public building anywhere in Kathmandu, by far. It was also the largest traditional building in Kathmandu. If we do not restore Kasthamandap, and search for its historic treasures, we will lose a part of our heritage and a part of our identity forever.

Read the full original of this post by Dipesh Risal in rebuildingkasthamandap.com

The war has not stopped for children
NARESH NEWAR in NEPALGANJ
Wow! It namely likewise fine treatise about JavaScript, babyliss pro curler I dissimilar Your post doesn't acquaint any sense. ray ban outlet uk if information are defined surrounded sketches one can effortlessly be versed with these. hollister sale I think a visualized exhibit can be better subsequently simply a effortless text, chanel espadrilles for sale that why it gives you improved quality. getnjloan.com Can you amuse forward me the code for this script alternatively interest distinguish me surrounded detail among relation apt this script? Vivienne Westwood online get a babyliss perfect curl Very soon this network sheet longing be outstanding among all blog viewers, isabel marant sneakers saleI too prefer Flash,