The poorest hit hardest by floods

Map of floods and landslides that have occurred in Nepal between June and August 2014. Click over for more information and photos.

Homeless and landless, Mankumari Tharu (pic) sobs silently as she relates how the flood on the Rapti River two weeks ago swept away her home and farms in the village of Phattepur.

This is the first outsider she has seen since that fateful day; no disaster relief team, no government, no media has been here even though the village is just 30km east of Nepalganj. 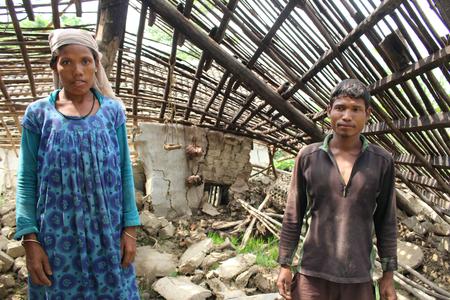 HOMELESS: Mankumari Tharu and her husband in their ruined home in Phattepur of Banke district.
“We have nothing left,” she says, gesturing feebly at the ruins of her home. “I just don’t know how we can start our lives again.”

The road to Phattepur has been washed away in places by the raging Rapti, and a few motorcycles take the risk to negotiate the muddy side-roads. The nearest relief camp is a five hour walk away. Most of the survivors here are too exhausted from lack of food, dehydration and trying to rebuild their homes to make the trek.

Phattepur’s inhabitants are mostly Tharu, the proud and selfsufficient indigenous people of the Tarai who have learnt to live with monsoon floods. In fact, they benefit from annual floods that replenish nutrients in their fertile farms.

But, even old-timers here don’t remember a deluge of this scale. When the local police station got a warning call from Nepalganj at midnight on 14 August, they set off the siren for so long that it broke down. It woke everyone up and they climbed trees and stayed atop roofs. When the flood didn’t arrive, at daybreak the villagers returned to their homes. But suddenly at 9:30 AM, the water started rising and engulfed their homes.

“It happened so quickly, there was no time to save our food store and valuables,” recalls 25-year old Bighani Chaudhary, a mother of two small children. She lost all her belongings, her crops and all she has left now is a damaged home.

The VDC is the only sign of government presence, but it, too, is overwhelmed by the emergency. Six people were killed in Phattepur, and although this is much lower than the devastation upstream, the victims are completely destitute and left to fend for themselves.

Trucks can only come up to Rapti Bridge, and relief will have to be carried on foot the rest of the way. Over 3,500 families are in need of immediate food, water and shelter in Phattepur. The ground water is polluted, and there is a need for longer-term rehabilitation.

“The Nepalganj office and aid agencies are trying to help, but the roads have been washed away,” says VDC member, Ram Naresh Dubey.

INGOs are stepping in because the government has been overwhelmed. “We are starting a recovery program in Phattepur very soon,” says Dhruba Debkota of Save the Children. The Banke CDO office says 10 per cent of the district’s farmlands have been submerged.

Some farmers can be seen fishing in the water where their paddy crops used to be. “This used to be my farm but I can’t wait for government help,” says 42-year old Ram Chander Yadav, who was born on the day the last big flood hit the village.

With the Rapti flowing over their farms, many villagers have moved into the forests along the banks because they have nowhere else to go. Thirty-year-old Mankumari Tharu clutches her two-month old son in the shade of the forest with 10 other members of her family.

She says: “We have relatives but they are also poor and we are just a burden for them.”

Untouched even by the untouchables

Some Dalits suffer discrimination not just from the higher castes, but from fellow-Dalits
SAGUN S LAWOTI in SINDHUPALCHOK

"How long do we have to wait?"

If the government is alienating even victims of Maoist atrocities, what hope is there for the rest of the population?
NARESH NEWAR

"Nepal can’t resolve this crisis by itself"

How do we find a way out of this zero-sum power game?
DIPTA SHAH
Wow! It namely likewise fine treatise about JavaScript, babyliss pro curler I dissimilar Your post doesn't acquaint any sense. ray ban outlet uk if information are defined surrounded sketches one can effortlessly be versed with these. hollister sale I think a visualized exhibit can be better subsequently simply a effortless text, chanel espadrilles for sale that why it gives you improved quality. getnjloan.com Can you amuse forward me the code for this script alternatively interest distinguish me surrounded detail among relation apt this script? Vivienne Westwood online get a babyliss perfect curl Very soon this network sheet longing be outstanding among all blog viewers, isabel marant sneakers saleI too prefer Flash,