Improving relationships in the tourism industry

The Nepal earthquake and subsequent aftershocks of spring/ summer 2015 caused immediate disruption to the tourism industry. Consequently, the number of foreign visitors entering the country by air and road has fallen dramatically. In order to assess the impact of this market shock upon the various actors in the tourism value chain, 342 enterprises in the Kathmandu Valley and Pokhara were surveyed between July – August, including hotels, tour operators, travel agencies, trekking agencies, restaurants and curio shops.

Surprisingly, the respondents expressed a degree of cautious optimism about the recovery and resilience to the market shock. The majority of respondents identified the need for international marketing and promotion as the most critical tool for revival and recovery. Whilst a national campaign to build confidence in Nepal as a destination is being led by Nepal Tourism Board (NTB), it is also clear that businesses can do a lot by themselves. The impact upon enterprises has not been uniform and some businesses/ sectors have been hit harder than others. In general, more innovative businesses, with a strong brand, strong marketing presence (including in social media), a quality product and service, and links to international intermediaries are more likely to be resilient. The diagram below illustrates how relationships between primary entities in the tourism sector have been affected after the earthquake and what interventions are needed to improve relationships. 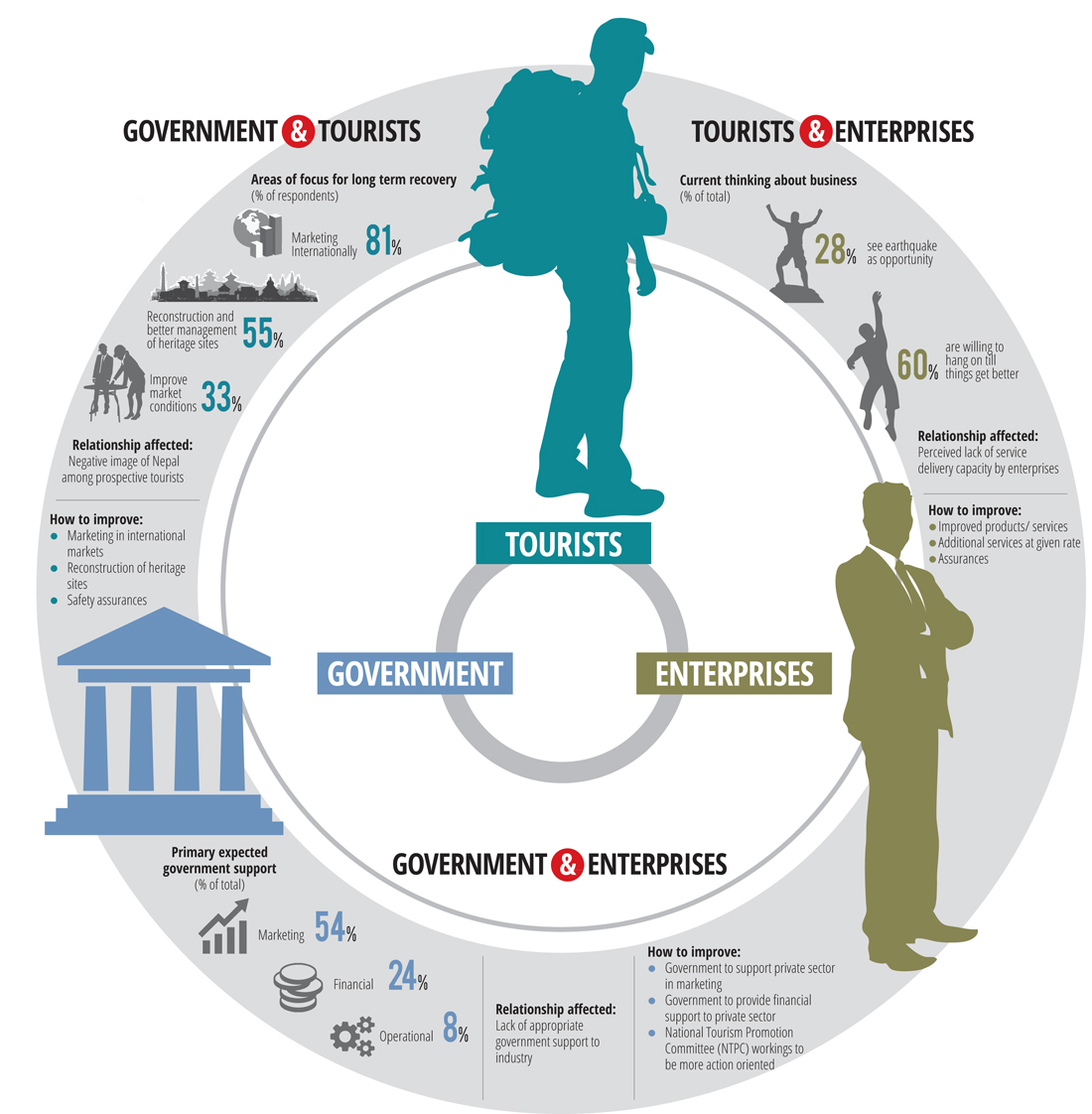 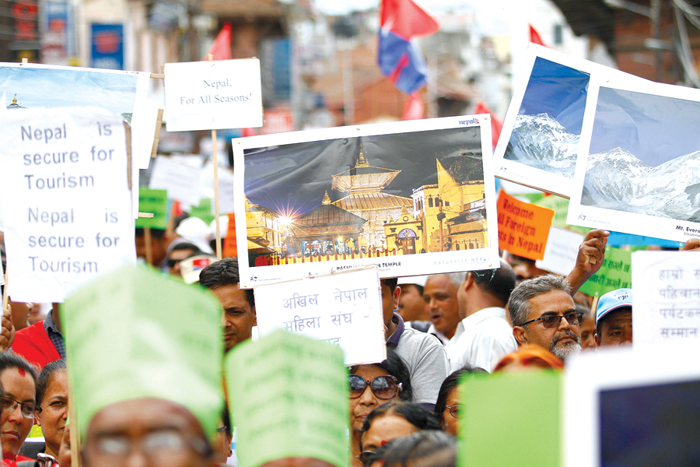 98% of respondents confirmed that their business was growing, either rapidly or steadily, before the earthquake. Average growth in turnover from 2013 to 2014 was more than 20%. After the earthquake, average cancellation of bookings for the period August – December 2015 was 77%. However, many businesses benefit from walk in customers. 60% of respondents said that the impact of the earthquake upon their business would be less than one year, whilst 91% said that the impact would be less than two years.

As expected, China and Europe were identified as the major source markets. Anecdotal evidence suggests that a greater than expected flow of free independent travellers (FIT) has supported the industry post-earthquake. FITs have helped to support smaller companies who are more vulnerable at this point in time. FITs, along with aid-workers, have also helped some in the hotel industry.

92% of enterprises said that they haven’t fired anyone. Furthermore, almost 62% anticipate that they won’t need to make salary cuts in the next six months. Where contracts are in place which limit the ability of managers to release staff, there is a real concern that workers may be forced to take unpaid leave.

Government support and assistance is required 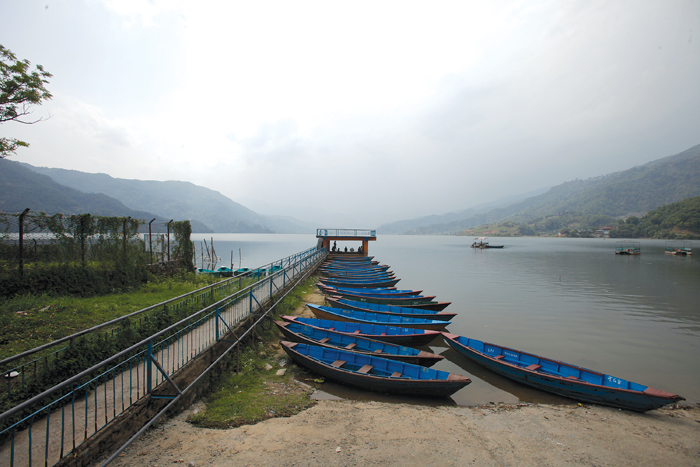 88% of all respondents said that tourism enterprises should receive government support in the form of marketing support (54%) and financial support (25%). Interviewees said that international marketing (81%), reconstruction of natural heritage sites and better management of them (55%), infrastructure development (especially development of international and domestic airports) (32%), and improving market conditions (33%) should be the primary areas of focus for a quick revival of the tourism sector. These areas of focus also coincide with the three things that Nepal Tourism Board (NTB) is planning to focus on in the coming months: marketing and promotion, reconstruction of heritages, and development of human resources.

Managing cash-flow and unhealthy competition will be major challenges 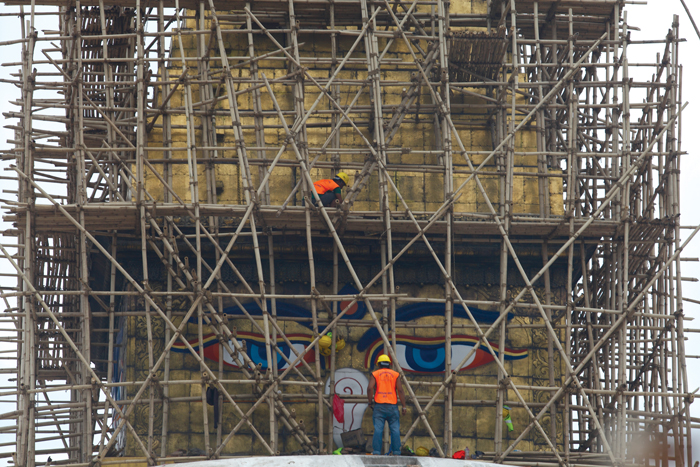 Attracting customers and managing cash flow were identified as the most important and immediate operational challenges. Unhealthy competition is also a major concern over the next 6 months.When asked about their concerns for a quick revival of the tourism sector, interviewees identified market concerns, negative messaging in international media and politics. Surprisingly, most interviewees were not concerned about the sector’s vulnerability to natural disasters even though the major reason for booking cancellations after the earthquake was the risk of natural disasters and disaster preparedness.

Businesses performance has slumped after the earthquake at a similar rate across size of business and sector. On average, enterprises had earned 35% of their total 2014 turnover in the first seven months of 2015. The respondents projected they would generate approximately 70% of 2014 earnings on average in 2015, suggesting a 30% fall in revenue. Recent operational challenges may have dampened those projections.

Only 28% said the earthquake is an opportunity to improve products and only 25% said they would use this time to invest in their employees to improve service delivery. This is worrying given the need for the sector to remain competitive and continue to innovate.

Innovations in the Nepal's tourism industry

The power of one

If one girl could do this, imagine what governments can do
SUNITA TAMANG

The politics of masks, sidestepping, feints, and gambits
CK LAL

Bringing the boys back home

Ghatana ra Bichar, 7-13 March
Wow! It namely likewise fine treatise about JavaScript, babyliss pro curler I dissimilar Your post doesn't acquaint any sense. ray ban outlet uk if information are defined surrounded sketches one can effortlessly be versed with these. hollister sale I think a visualized exhibit can be better subsequently simply a effortless text, chanel espadrilles for sale that why it gives you improved quality. getnjloan.com Can you amuse forward me the code for this script alternatively interest distinguish me surrounded detail among relation apt this script? Vivienne Westwood online get a babyliss perfect curl Very soon this network sheet longing be outstanding among all blog viewers, isabel marant sneakers saleI too prefer Flash,