Lojung Kippa Sherpa is from the mountains of eastern Nepal, and had difficulty feeding and raising her three children. So, when her sister told her about an organisation promising to take them to Kathmandu and provide free schooling, she readily agreed.

That was six years ago. In February, police raided the Happy Home Nepal shelter in Dhapakhel and freed four young boys and girls, among them Sherpa’s three children who were found to be undernourished. One of them was suffering from TB and hadn’t been to school for two months. Happy Home’s founder, Bishwa Pratap Acharya, allegedly used the children as bait to raise funds from Czech, Slovak and British donors, amassing tens of thousands of euros since 2006 while neglecting his children.

“The owners didn’t let me see or take my children back home for all these years because they used my children to make money,” Sherpa said after being reunited with her children recently. Happy Home was raided in February the Central Child Welfare Board and the Central Investigation Bureau (CIB) after repeated complaints of abuse. Acharya is charged with fraud, abduction and child-trafficking and is the first person ever to be detained for child trafficking in Nepal after the Lalitpur District Court refused him bail.

“Most children from remote districts such as Humla and Kalikot have parents, and the owners make money from the children by promising the parents free education,” says Tarak Dhital of the CCWB. The number of fake orphanages has increased after the crackdown on the adoption racket, and traffickers have set up fake shelters as a new revenue stream based on foreign donations.

Despite receiving complaints against many such fake shelters, the child protection authorities don’t immediately raid and “rescue” children citing lengthy procedure and limited resources. “We are doing our best with whatever resources we have to ensure strict monitoring in these homes but we aren’t always able to act on all the complaints we receive every week,” says Namuna Bhusal of CCWB. It took CCWB almost a year to raid HHN and arrest the owner after the first complaint was filed. So it came as a surprise to many child rights activists when CCWB raided Amako Ghar in Kuleshwor for its sub-standard hygiene and care less than two weeks after the raid at HHN. 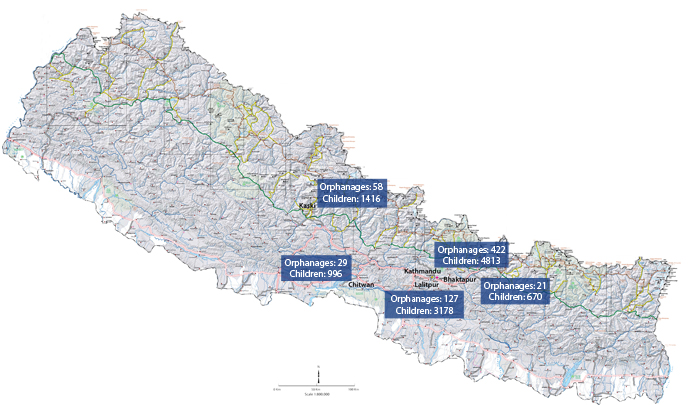 Child rights activists also blame foreign volunteers and donors who easily buy into the plight of children. Most ‘volunteers’ have to pay to be a part of these shelters and traffickers are known to tour Europe with photo albums of children.

Sano Paila, a Birganj-based group that works with Freedom Matters in UK, has tried to get permission from the National Human Rights Commission and CCWB to rescue and rehabilitate the remaining children from Happy Home. But Lalitpur Chief Distrcit Officer Sashishekar Shrestha has refused to sanction rescue of the remaining children saying there haven’t been reports of mistreatment at Happy Home, and there is no need for rescue now.

Rajdhani, 12 March
Wow! It namely likewise fine treatise about JavaScript, babyliss pro curler I dissimilar Your post doesn't acquaint any sense. ray ban outlet uk if information are defined surrounded sketches one can effortlessly be versed with these. hollister sale I think a visualized exhibit can be better subsequently simply a effortless text, chanel espadrilles for sale that why it gives you improved quality. getnjloan.com Can you amuse forward me the code for this script alternatively interest distinguish me surrounded detail among relation apt this script? Vivienne Westwood online get a babyliss perfect curl Very soon this network sheet longing be outstanding among all blog viewers, isabel marant sneakers saleI too prefer Flash,