Crushing tale of the Chure 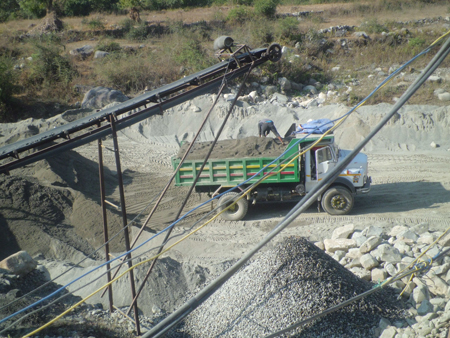 DEVASTATED LAND, DESTITUTE PEOPLE: Tipper trucks haul the Chure’s sand and gravel to India, ravaging the hills and causing floods.
Every time a strong wind blows down the canyons of the Narayan Khola, boulders shaken lose tumble down the cliffs of Parewa Bhir. This isn’t because of deforestation or soil erosion, it is simply the geology of the fragile hills of the Chure.

They are made of crumbling sedimentary layers pushed up by the tectonic forces that formed the Himalayan mountains. The youngest and environmentally vulnerable hills need no help to disintegrate. However, in the last few decades they got plenty of help from new human settlements.

Fueled by the construction boom in Nepal and the burgeoning demand for aggregates from India, the Chure doesn’t stand a chance. Everywhere one looks, the hills and rivers have been ravaged by quarries, sand and boulder mining, and illegal logging. Excavators and bulldozers claw at the river banks, and stone crusher plants blight the landscape.

Media coverage of the devastation caused by the quarry mafia enjoying political protection prompted the government to ban the export of aggregates to India last year. But a lot of the damage has already been done. River beds devoid of boulders which used to keep the velocity of the water in the monsoon in check have washed away farms and homes, damaging bridges and highways.

“The first mistake was made by the government,” says Sita Ram Dahal, chairman of a local network of forestry user groups. “It was a mistake to let contractors extract sand and boulders from the river beds without regulating them.” 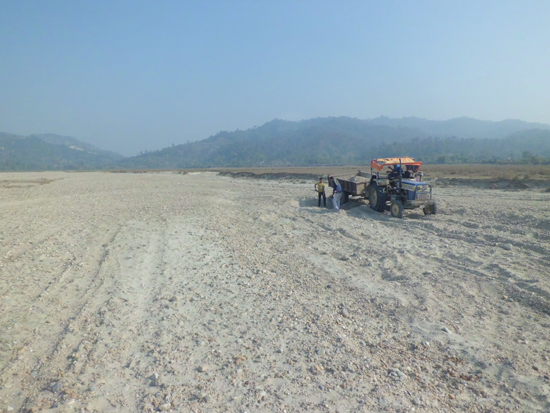 With the boulders gone, rivers flowing out of the Chure erode farmlands, but tractors are still mining stones along the river beds.

Once contractors paid the VDC fees, they were free to excavate as much sand and boulders as they wanted. Tipper trucks from as far away as India roared through narrow village roads to carry off the sand and stones. The ventures were so profitable the contractors made their own roads along the rivers, but the 60 ton trucks are so heavy they have destroyed the tarmac of the East-West Highway.

Some of the stone crushers have now been abandoned because of the ban, while others still operate clandestinely at night. But local villagers, who had been promised jobs and prosperity, are now paying the price. 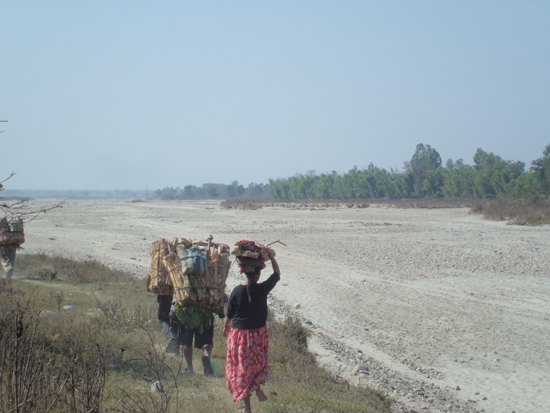 The angry rivers change their course often, washing away crops and depositing sand on fertile farms. In the monsoon, the roads built by contractors become river channels leading to water-logging of fields.

Under the personal initiative of President Ram Baran Yadav, the Tarai-Madhes Conservation Development Committee was formed in Kathmandu two years ago and headed by former chief secretary Rameswor Khanal. But here on the ground there is little to show for it. 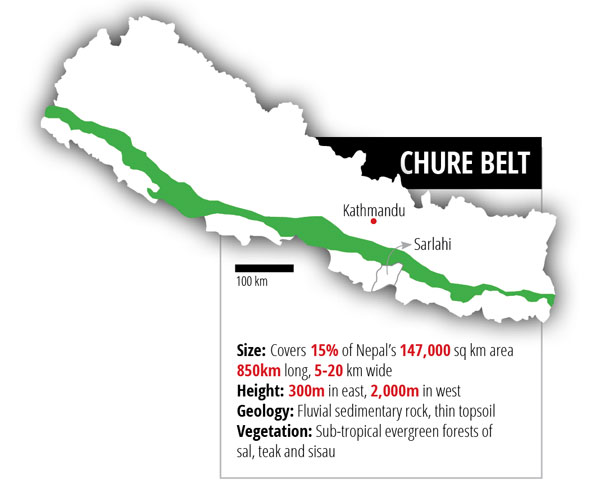 “All they are doing is documentation work, not conservation,” says Dahal, “it has become a dumping ground for retired forestry staff.”

As a member of a local group that manages the medicinal plants and other by-products of the Chure forests, Dahal is acutely aware of the need for conservation. The loss of forest cover is mainly due to population pressure forcing people to migrate and settle in government-owned forests.  “The Chure recharges ground water in the same way a recharge card recharges mobile phones,” Dahal explains to visitors, “but stone and sand mining and the loss of forests leads to the desertification of not just the Chure but also of the Tarai downstream.” The water table in the Tarai is falling at 1m a year because of the denudating of the Chure catchment.

But when there is water, there is too much of it. Last year, a flash flood entered the village of Parwanipur, drowning Babu Yonjan and leaving his family of 11 destitute (see below). Their farm is now full of boulders and sand.

Neighbour Bhim Bahadur Gyaba has given up planting anything, and now earns a living as a day labourer along the East-West highway.

In the town of Lalbandi in Sarlahi District one of the two crusher plants is still working, but at night. Residents complain of noise and the dust has affected their crops. During the day, the wind blows the sand from the dry river beds into their homes.

Babu Yonjan of Parwanipur was bringing home groceries from the market late one monsoon evening last year. It had been raining steadily all day, and a brown flood of sand and mud came down the Jharjhara River without warning sweeping him away. Yonjan was a subsistence farmer, whatever he grew was enough just to feed his family of 11. The farm, two chicken and two cows are all that remain for his surviving family. 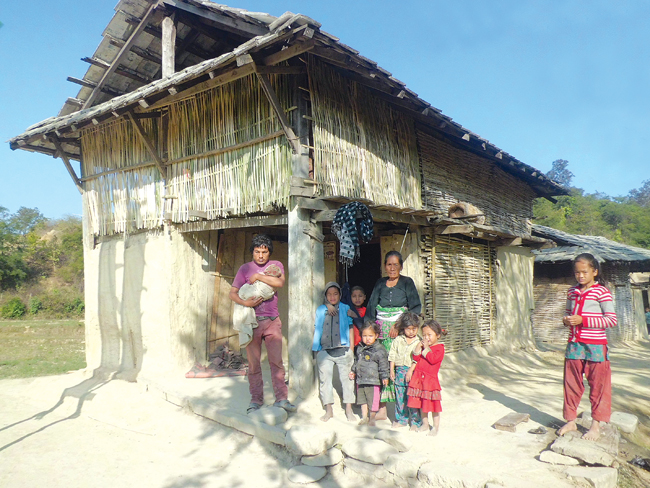 Yonjon’s family was paid Rs 100,000 by the government as compensation, but the money has long since gone. Yonjon’s third son, who was working as a labourer in Kathmandu, has returned home and helps grow vegetables and corn to feed the family. His siblings work as drivers or labourers and have no savings to help out. Flash floods are now common in the area, because besides stone crushing plants and quarries there is also illegal logging and encroachment of forests. With the vegetation gone, the thin Chure topsoil is easily washed down in the monsoon while perennial springs go dry in winter. 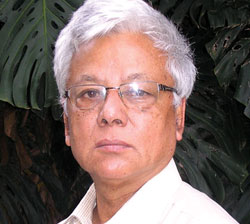 Ecologist Tirtha Bahadur Shrestha speaks to Nepali Times about why the Chure eco-system is important.

The government says it has banned groups from felling trees in Chure. Is it true?

Community forestry has worked elsewhere, but not in the Chure. Why?

Community forestry in the mountains were nurtured and protected by local communities because of their agro-forestry use. In the Tarai and Chure, these are national forests which have great commercial value. So when local people asked to be part of the community forestry program, it was actually to cut the trees and sell it. Even before political groups cut the trees, it was already being settled by migrants, and this trend continues. This is why the President had to step in to stop an eco-system collapse.

What will be the consequences of an eco-system collapse?

Due to population growth in the Tarai, plants, animals and other biodiversity have moved to the Chure forests for refuge. But people also started moving to the Chure because of congestion in the Tarai. The Chure is therefore the last resort of poor people and endangered species like wild elephants, rhinoceros, snakes, tigers, sal, orchids and medicinal plants. So, if the Chure is gone, many species will be extinct from Nepal.   But how can agriculture and forests coexist?

Agriculture in the Chure should take the soil and slopes into consideration. Because the crops are not suitable, people are turning to mining and extraction for jobs. The Chure has a very thin top soil. If you take it away, or if it is eroded, you have a desert.

What are the options?

We should promote aquaculture, silviculture and agriculture only. And we should resolve the conflict between those who depend on the natural resources for survival and those who want to exploit it for profit. Local farmers with a few cattle are not the problem. The problem is the infrastructure boom across the border in India. Fifty years ago, Nepal’s sal forests were cut for railway lines in India, now it is our sand and stones for their highways and irrigation canals. History is repeating itself.

First is grassroots awareness and action. Local people know about the threats in the Chure, but not the immediate benefits of conservation. Crossborder cooperation with the Indian state of Bihar, since destruction of the Chure will ultimately affect farms and towns in Bihar.

“The Chure can’t be saved overnight” 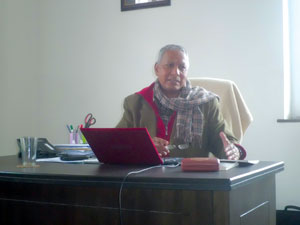 Bijay Kumar Singh of the President’s Chure-Madhes Conservation Development Committee spoke to Nepali Times about his organisation’s effort to protect the Chure.

Nepali Times: There is a lot of complaints in the Chure that your organisation isn’t doing enough to conserve the region.

Bijay Kumar Singh: Our area of jurisdiction is only within the Chure range where we won’t allow sand mining and logging. We consult foresters and geologists, perform IEE and EIA to see if extraction can be allowed, how much and where.  But if there is sand and boulders that are washed down and outside the Chure belt, then the relevant District Forest office or the DDC can award contracts.

At present, the Committee is working in accordance with the plan of action prepared by the Government of Nepal. We are also working on our own Master Plan for Chure conservation and management. At present we are doing field work and data collection to make the basis for our master plan.

But meanwhile the Chure is being gradually destroyed.

That is why we are working on this strategy with conservation groups to collect data on the sensitive areas of the Chure and suggest urgent measures to work with local communities for conservation. Our area of work will be the entire Chure belt, from the Bhabar mountains to the Indian border.

Can the Chure be protected?

Protection of the Chure is not something that can be done overnight, we don’t have a magic wand for that. The problems didn’t appear overnight,  either. The Chure is being exploited and encroached upon for the last 50 years. We work with forest offices, the Department of Geology and Mines, agriculture experts and NGOs in a multi-stakeholder approach. Our first priority is to shift people living in areas prone to floods and landslides. This  presents problems because most Chure slopes are fragile and vulnerable and there are settlers there. It is necessary to give them alternatives, we can’t just throw them out. We will propagate ponds and cultivation of amareso grass so the slopes are protected and incomes raised. One priority is undergrowth in the forests, which have thinned because of overgrazing.

What is the main obstacle you grapple with?

It is the illegal settlement of migrants. They don’t have ownership and therefore little responsibility to conserve what is a very vulnerable environment. We have to create awareness and behaviour change among them. They need alternative jobs, so they don’t need to depend just on the forests and rivers. The Chure is a gigantic sponge that holds water and releases it in the dry season, if we don’t protect these hills the Tarai in Nepal and the Indian plains will also become a desert.

Help save the Chure hills, Tirtha B Shrestha

Out on a limb, Dewan Rai

Laxman Chaudhary (Roshan) in Nepal, 13 May

A free media is essential for a free society
DANIEL LAK
Wow! It namely likewise fine treatise about JavaScript, babyliss pro curler I dissimilar Your post doesn't acquaint any sense. ray ban outlet uk if information are defined surrounded sketches one can effortlessly be versed with these. hollister sale I think a visualized exhibit can be better subsequently simply a effortless text, chanel espadrilles for sale that why it gives you improved quality. getnjloan.com Can you amuse forward me the code for this script alternatively interest distinguish me surrounded detail among relation apt this script? Vivienne Westwood online get a babyliss perfect curl Very soon this network sheet longing be outstanding among all blog viewers, isabel marant sneakers saleI too prefer Flash,