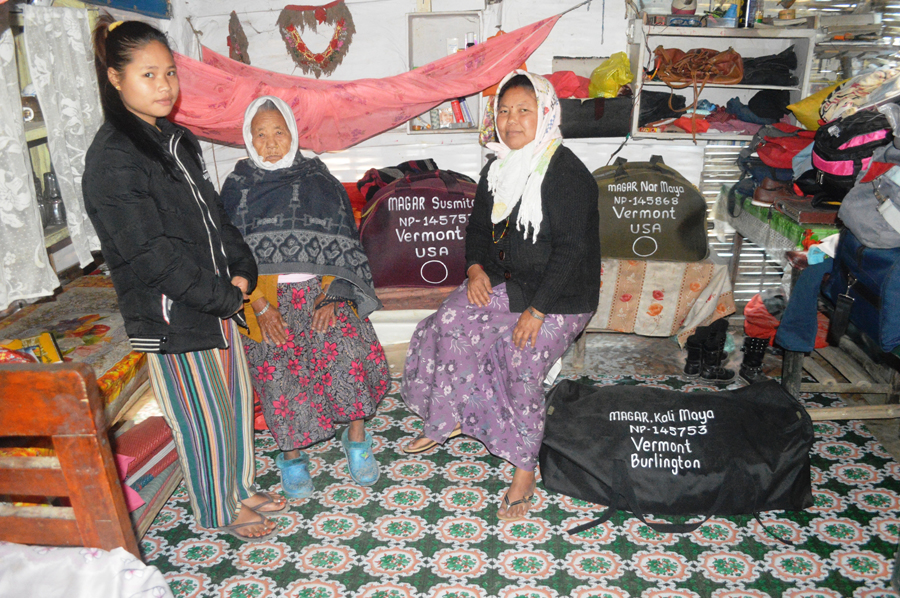 Refugee families from Bhutan who have lived in camps in Nepal for more than two decades and were finally ready to board flights to the United States this week have been stopped by President Trump’s immigration ban. This is another blow for the remaining refugees whose UN food rations were reduced last week.

Kali Maya Magar (pictured at right, above, with mother-in-law Nar Maya and 17-year-old daughter Sushmita) was all set to fly to Kathmandu on Tuesday on a journey that would take them to Vermont to rejoin the rest of the family.

The Magars are some of the last among 120,000 refugees who were evicted by Bhutan in the early 1990s and had been living in camps in Morang and Jhapa. A multinational agreement in 2007 arranged their resettlement, and the US has already taken 92,000 refugees with smaller numbers going to Australia, New Zealand, Canada, the Netherlands, Norway, Denmark and UK.

Kali Maya was a teen-age girl when her family was forced out of southern Bhutan. She married her husband, Dhan Bahadur, in the Beldangi Camp. Her married children have already been resettled in the US, and she was waiting for a grand family reunion when the Trump ban came into effect. “I was so happy that our family would be together again in America, but everything is uncertain now,” Kali Maya told us, sitting amidst packed bags in the bamboo hut that has been the family home for 25 years. Trump has hinted that refugees may be allowed to the US after four months, but only those from ‘minority religious groups’, a euphemism for Christians.

This comes as the UN’s World Food Programme (WFP) last week reduced food it has provided refugees since 1992. While retaining full rations for the remaining 3,100 children, elderly and disabled refugees, it is giving only half ration to the rest. 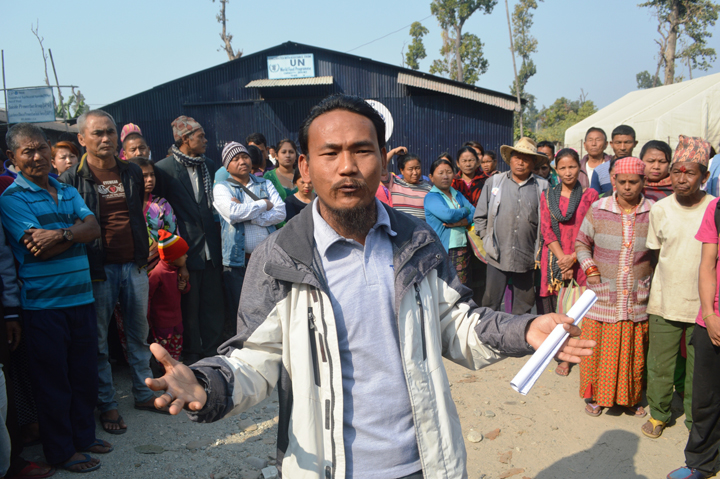 “We are hungry, our children are unable to study," says Sanchahang Subba at Beldangi

In protest, all 500 WFP refugee volunteers involved in distribution stopped work on Wednesday. Said Sanchahang Subba at Beldangi: “We are hungry, our children are unable to study.”

Full food supply is unlikely to resume as WFP is said to face a funding crunch because of more serious crises elsewhere.

Of the 9,000 refugees remaining in camps, 1,700 say they want to be repatriated to their own homeland. However, EU ambassador to Nepal Rensje Teerink told Nepali Times in Jhapa last week that Nepal and Bhutan need to accept the refugees who remain after the resettlement ends in June.

Meanwhile, Bhutanese refugees have accepted food support provided by the WFP from Friday. They said they began taking foods after local authorities promised to find other donors ready to support them.

Every time New Delhi sneezes, Nepal gets the flu.

With Confidence and Finesse
MANJUSHREE THAPA

When one social carnivore reneges on the contract and neglects the other, it is the end of a beautiful relationship and the beginning of a problem.
SALIL SUBEDI
Wow! It namely likewise fine treatise about JavaScript, babyliss pro curler I dissimilar Your post doesn't acquaint any sense. ray ban outlet uk if information are defined surrounded sketches one can effortlessly be versed with these. hollister sale I think a visualized exhibit can be better subsequently simply a effortless text, chanel espadrilles for sale that why it gives you improved quality. getnjloan.com Can you amuse forward me the code for this script alternatively interest distinguish me surrounded detail among relation apt this script? Vivienne Westwood online get a babyliss perfect curl Very soon this network sheet longing be outstanding among all blog viewers, isabel marant sneakers saleI too prefer Flash,