If you surf YouTube as much as I do, love music, and are a big fan of covers, chances are you’ll have come across these names: Smriti Shrestha, Shreya Rai, Bipul Pandey. 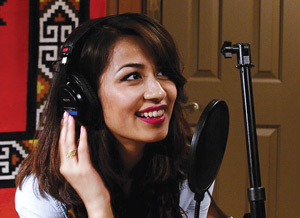 Amongst the hundreds of new-gen Nepali musicians who have taken to the video streaming site to showcase their talent (sometimes non-existent ala Mr Bhim Niraula), these three stand out for their renditions of classic Nepali hits that have not only earned them subscribers but also ignited a renewed interest in Nepali music of the yester years.

Shrestha’s cover of legendary singer Aruna Lama’s Pohor Saal is in a word ‘exquisite’. The 24-year-old’s raw, rustic tone is the hero of this acoustic version which manages to maintain the melancholy feel of this famous song almost as well as the original.

“I’ve always loved old Nepali songs. This cover was an effort to bring these forgotten songs back to people’s memory,” writes Shrestha in a Facebook message from Boston where she is studying International Relations. In five months, the video has received a lot of love and a lot of views, making it her most popular upload till date. Says Shrestha: “The feedback I get from people on YouTube has encouraged me to do this more seriously and the criticism has helped in my growth as an artist.”

As with Shrestha, it is UK-based artist Shreya Rai’s rendition of Eh Kancha originally sung by Aruna Lama and Rudra Gurung that has earned her more hits than many of her other videos. Rai’s cherubic voice lends this timeless love song a lullabylike feel and I suggest listening to it right before going to bed. But might I warn you that you’ll be hooked and it’ll only be after playing it another 10, 20 times before you finally go offline for the day. Since the video was first uploaded in July last year, comments have come flurrying on Shreya’s wall, all positive and full of praise for the young singer.

For 23-year-old Bipul Pandey, YouTube came as the perfect outlet to release his hidden musical aspirations. A self-confessed introvert, Bipul says even his friends didn’t know that he could sing. That was until he uploaded his first YouTube video Barsha four years ago. But it was only after his cover of Narayan Gopal’s Euta Manchhe, that YouTubers really began to take notice.

“YouTube has given me a platform through which I am able to connect with a larger group of audience and artists,” writes Bipul who is currently pursuing his undergraduate degree in Physics and Mathematics from the University of Texas at Austin. “Apart from that, I’ve also received positive feedback from some of the actual artists whose songs I covered which was simply unbelievable,” he adds.

The popularity of these three artists’ covers of classics show that there is more than a place for forgotten medlodies in today’s time of eletronica and autotune.

A new show at the Park Gallery cements its reputation for showcasing innovative art in Nepal.
SOPHIA PANDE

The best thing about a World Cup is the fans.
BILL BREWSTER

We live in the present with the memories of our past, and undermine our future.
CK LAL

Dr Gabriel Campbell-Director general of the International Centre for Integrated Mountain Development
Wow! It namely likewise fine treatise about JavaScript, babyliss pro curler I dissimilar Your post doesn't acquaint any sense. ray ban outlet uk if information are defined surrounded sketches one can effortlessly be versed with these. hollister sale I think a visualized exhibit can be better subsequently simply a effortless text, chanel espadrilles for sale that why it gives you improved quality. getnjloan.com Can you amuse forward me the code for this script alternatively interest distinguish me surrounded detail among relation apt this script? Vivienne Westwood online get a babyliss perfect curl Very soon this network sheet longing be outstanding among all blog viewers, isabel marant sneakers saleI too prefer Flash,