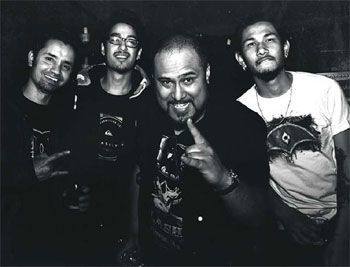 Returning from a three year hiatus, Nepali rock band Monkey Temple has just released their self-titled third album last month. They debuted in 2002 with the album Black Bee and the Flower, and came out with their second record Shades of Grey, ten years later.

Founded in the corridors of St. Xavier’s School in 1998, the third album Monkey Temple consists of nine songs with seven new tracks.

The new and improved Monkey Temple has a new drummer and bassist, and a fresh sound that is more refined compared to the first two albums. Their new songs are calmer sounding with a catchy rhythm.

The opening track Awaj Malai Deuna (Give me your voice) is sung by Sareen Deoja. Loyal fans of the band might notice that Deoja’s voice is raspier, and that he also has better control over it now.

Sadhai Bhari is a surprising mix of Post-Britpop and grunge of the pre-Monkey Temple days. This song is a good step towards the evolution from Shades of Grey to their new album. Songs like In the Blue and Samaya give Monkey Temple a slow rock vibe where there is more emphasis on lyrics and melody, than the constant beat of hard rock.

Monkey Temple has abandoned distorted elements for their eponymous album. Still the solos and riffs of guitarist, Prajwol Bhattarai, are reminiscent of 90s sound of Seattle: even in the most sentimental songs like Sangai.

In this third record, Monkey Temple reuses two old songs, Sangai Bachauna and Acoustic 11. The band wanted to refine their music as they had created a niche in the Nepali market when their first album was released. “In 2002, we couldn’t do much in terms of studio production,” says Deoja, “so the sound quality was not up to par.”

On Shades of Grey, the band unveiled percussive rhythms supported by the groovy bass of Samrat Shah. In this respect, early fans of Monkey Temple might pine for the original grungy touch, which is how they first introduced the band. However, despite the gradual change of style, the band continues to create and develop its authentic style. “In a country like Nepal, the more you sound like your influences, the more hits you make,” said Deoja regretfully.

In Kathmandu’s rock music scene, where most bands are either metal or pop-rock, this third album makes Monkey Temple an eclectic band that cannot be classified into just one category.

“I guess we are in between,” said Deoja.

The band is set to play in the Golden Bear Rock Festival in Columbus, Ohio on 25 April.

Secret Ballot reminds us why elections are important
A. ANGELO D'SILVA

Post-election hopes are few, but fears many
CK LAL
Wow! It namely likewise fine treatise about JavaScript, babyliss pro curler I dissimilar Your post doesn't acquaint any sense. ray ban outlet uk if information are defined surrounded sketches one can effortlessly be versed with these. hollister sale I think a visualized exhibit can be better subsequently simply a effortless text, chanel espadrilles for sale that why it gives you improved quality. getnjloan.com Can you amuse forward me the code for this script alternatively interest distinguish me surrounded detail among relation apt this script? Vivienne Westwood online get a babyliss perfect curl Very soon this network sheet longing be outstanding among all blog viewers, isabel marant sneakers saleI too prefer Flash,