Someplace Else by Sunir Pandey 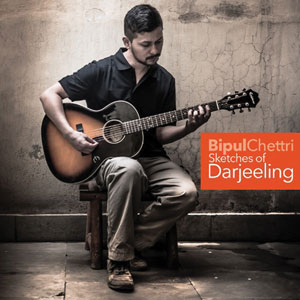 When Bipul Chettri released his first song Wildfire/Dadhelo on the online audio platform Soundcloud, it spread among Nepalis (and Nepali-speakers) like flames. We heard him hinting at a forest fire searing through the Darjeeling hills, but what really tore him apart were the pent-up dreams raging inside. He sang out his anxieties at such a frantic speed that before the song was over, we had it on repeat.

Chettri followed up his blazing hit with a song about the monsoon. In Asar, he managed to douse the flames of Wildfire and sang sagely about the need to balance life and love. On the outside, the song was about the rainy season in his hometown Kalebung, but mind wandering among rain clouds and unending mist seeping through town, it was also an evocation of a beloved.

This week, Chhetri released Sketches of Darjeeling, an EP that features three other songs in addition to the three we already knew. From forest fires to the smell of the first monsoon rain, from the meditative chanting of Om Mani Padme Hum to the choo-choo of the famous Toy Train, Sketches paints a nostalgic picture of life around the Darjeeling hills.

In Deorali Darah, Chettri reminisces about a childhood in the hills, and wishes he could still casually walk around the windswept town. He is now living in Delhi, having taken the train away. Ram Sailee is Chettri’s tribute to his father, the late Nirendra Mohan Chettri who also wrote the song long ago and is still regarded as a pioneer of folk music in Kalebung. 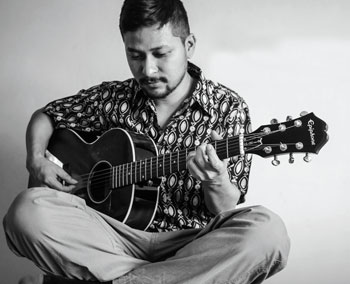 No portrait of Darjeeling would be complete without mentioning its famous Toy Train. The upbeat march of Rail Garee takes us past local landmarks while Chettri sings about eventually taking the same train to seek work outside the hills. “I’m going away, choo choo,” Chettri sings without regret, joyfully closing the album.

Besides making music and performing at select charity concerts, Chettri currently heads the arts department at the Vasant Valley School in New Delhi. The songs he released on Soundcloud have received over 450,000 hits and been played numerous times on radios in Nepal, India, and UK.

When Diwas Gurung recreated much-loved Nepali folk songs on his excellent album Rato Mato, he gave us a taste of what was possible with the vocabulary of folk music. With Sketches of Darjeeling, Bipul Chettri has taken it further and established a place for himself in our growing neo-folk scene.

The masterful blend of earthy tones and unmistakably Western harmonies, layered around Chettri’s melancholy singing makes Sketches essential listening, despite the brevity. What everyone is dying to know is how long will we have to keep pressing repeat before we get to see him live, in Kathmandu.

Sketches of Darjeeling, 21”5’, is available on iTunes

The sound of our soul, Ayesha Shakya

The standardisation of Nepali Unicode will revolutionise the way we use computers.
VIBEK RAJ MAURYA

Himal Khabarpatrika, 31 December-14 January
Wow! It namely likewise fine treatise about JavaScript, babyliss pro curler I dissimilar Your post doesn't acquaint any sense. ray ban outlet uk if information are defined surrounded sketches one can effortlessly be versed with these. hollister sale I think a visualized exhibit can be better subsequently simply a effortless text, chanel espadrilles for sale that why it gives you improved quality. getnjloan.com Can you amuse forward me the code for this script alternatively interest distinguish me surrounded detail among relation apt this script? Vivienne Westwood online get a babyliss perfect curl Very soon this network sheet longing be outstanding among all blog viewers, isabel marant sneakers saleI too prefer Flash,