Sometimes the best meals are to be had when you least expect it, and such was the case with the Urban Food outlet. We happened in on the one in Bluebird Mall in Thapathali and decided well, why ever not… let us have us some hot dogs. For what the Urban to Go Meals on Wheels outlets specialise in are wieners. 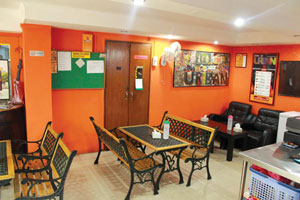 Opened about a year and a half ago, the Urban meat company produces a variety of processed meats and retails their products in most supermarkets in the valley. Its food carts in BlueBird Mall, Sherpa Mall, Naxal Bhathateni Supermarket and Namaste Supermarket are fast gaining popularity and draw a regular crowd of loyalists who keep returning, knowing that they will get a quality product at very reasonable prices.

The charm of a hot dog lies in its straightforwardness and simplicity- it is a sausage in a bun. And that is what we first sampled- Urban’s Cassic Hot Dog (Rs 80). And here is the biggest compliment that the Urban hot dog is going to get- it actually tastes of the meat it is made of. None of that dry cardboardy slightly acrid sausage that most companies dole out, but a basic tasty moist frank. 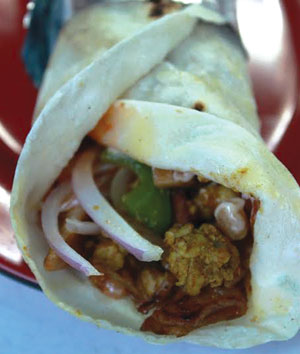 Encouraged we decided to get more adventurous and The Dog Father-I (Rs 200) followed. A frankische bratwurst with grilled onions and mayo and mustard is a grown up version of the humble dog and definitely one that will keep one coming back for more. The Spicy Keema Dog (Rs 100) and the Monster Dog (Rs 150) both are designed keeping the Nepali palate in mind and come with lashings of capsicums, onions, meat and cheese. The Burrito Roll (Rs 120), though not a hot dog, is Urban’s most widely demanded item tells us our server/chef/sausage authority all rolled into one. So we sampled it and understand its popularity. It tastes more like a kathi roll than anything Mexican but it is not a bad bet for a quick bite on the go. They also serve the intriguing sounding Diet Momos, which when queried turn out to be the ubiquitous momos without the additional fat and lard added to it to make it juicier, thus making their version of the most loved Nepali snack much healthier. 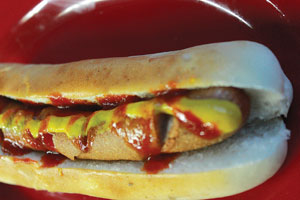 The Urban food cart is well-maintained, and there is a visible attempt to keep it clean and hygienic. The staff are personable and friendly and answer all the questions inquisitive reviewers throw at them. And then there is also the CEO’s Special, at Rs 300 the most expensive dish on offer, that is playing its siren song on me, for not only is the bun stuffed with an oversized sausage but also grilled cheese and bacon…a dog such as that demands reverence and I’ll be back at Urban to show it its due respect.

How to get there: Urban food carts can be found in BlueBird Mall, Sherpa Mall, Naxal Bhathateni Supermarket and Namaste Supermarket.

Letter to editor in Nagarik, 4 January
Wow! It namely likewise fine treatise about JavaScript, babyliss pro curler I dissimilar Your post doesn't acquaint any sense. ray ban outlet uk if information are defined surrounded sketches one can effortlessly be versed with these. hollister sale I think a visualized exhibit can be better subsequently simply a effortless text, chanel espadrilles for sale that why it gives you improved quality. getnjloan.com Can you amuse forward me the code for this script alternatively interest distinguish me surrounded detail among relation apt this script? Vivienne Westwood online get a babyliss perfect curl Very soon this network sheet longing be outstanding among all blog viewers, isabel marant sneakers saleI too prefer Flash,