Someplace Else by CC

Ignore the terrible name; Phat Kath might just be my new favourite restaurant. Offering French-ish food, a takeaway crêperie, low tables and hookahs for hippies, tables and chairs for normal people, and a formidable hip hop soundtrack for everyone, there’s a lot to love. 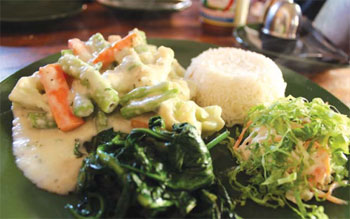 In many ways this looks a bit like any of the two-bit, ill-conceived throwback joints Thamel has been drowning in for as long as most of us can remember: all old John Lennon record sleeves, space-poor, kitsch-rich layout and the gastronomic equivalent of the gaudy rainbow patchwork kurtas I overheard two other diners regretting they’d bought. But something more compelling is happening at Phat Kath and it starts with the blackboard menu adorning the open kitchen, which you can just about squint to see from front-of-house.

With a total lack of pretence, the restaurant announces its burgers, crêpes, Breton galettes, and miscellany without printed menus: the blackboard, or rather the dishes it discusses, is the centrepiece. PM ordered sea-buckthorn juice (Rs 150), which I’d only ever seen advertised out of season in Langtang, and it’s great, if you’ve never had it.

But things really got going with the Phat burger (Rs 350), which came as a generous helping of sliced steak, bacon, egg, cheese, and salad (yes) on a good (read: savoury, not sweet) bread bun and with a side of fries. The burger held together well – there are people and I aspire to be one, for whom this is a science – meaning a mouthful ensured even distribution of every ingredient and not a single morsel was wasted. 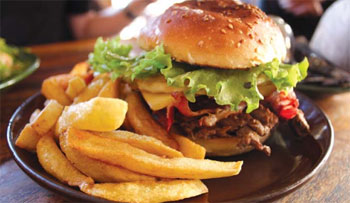 The forest galette (Rs 300) – a kind of stuffed pancake made with wholemeal or buckwheat flour – was filled to bursting with tender pieces of chicken, wild mushrooms grown here in Nepal, and a creamy mustard sauce.

The only low point, for us, was when we went vegetarian. This predictably recurring theme is perhaps unsurprising – vegetarians in predominantly carnivorous lands have often suffered from bland, uninspired, put-something-on-the-plate slop servings. The vegetarian au gratin (Rs 350), served with wilted spinach, rice, and – for no apparent reason at all – coleslaw, was essentially a few vegetables stirred into a bland, generic cream sauce. There was nothing gratinated about the dish and PM is now petitioning that we stop ordering vegetarian altogether.

We couldn’t leave without sampling something from the crêperie. The streets of Paris are lined with these stalls, serving both sweet and savoury pancakes to the city’s notoriously discerning passersby. Because I am actually five, I went for the chocolate-banana crêpe (Rs 200) which, if I’m feigning expertise (which I am), was a little on the thick side.

Phat Kath doesn’t demand to be taken too seriously: it’s laissez faire. What’s refreshing is that, unlike so much of the district, this place provides an atmosphere where diners can seriously kick back, all the while – vegetarian food aside (and who goes to a French joint for vegetables, anyway?) – these guys are taking what they do very seriously indeed. 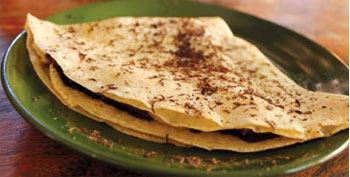 How to get there: look (very carefully) for a small, floor-standing sign pointing into an alley off Chaksibari Marg. Phat Kath is on your right if coming from JP School Road.

You get what you deserve

The civil service in the new federal Nepal should be efficient, result-orientated and approachable
SHYAM PRASAD MAINALI
Wow! It namely likewise fine treatise about JavaScript, babyliss pro curler I dissimilar Your post doesn't acquaint any sense. ray ban outlet uk if information are defined surrounded sketches one can effortlessly be versed with these. hollister sale I think a visualized exhibit can be better subsequently simply a effortless text, chanel espadrilles for sale that why it gives you improved quality. getnjloan.com Can you amuse forward me the code for this script alternatively interest distinguish me surrounded detail among relation apt this script? Vivienne Westwood online get a babyliss perfect curl Very soon this network sheet longing be outstanding among all blog viewers, isabel marant sneakers saleI too prefer Flash,