Proceeds from the sale of the book HOME will go to support child survivors of the earthquake.

Nepali artist Kripa Joshi had a morbid fear of earthquakes. During an earthquake during her childhood, she remembers her mother running upstairs to carry her to safety while everyone in the house was running down. Joshi had flown in from London with her one-year-old daughter to visit her family in Kathmandu when the earthquake struck on 25 April. She was not with her daughter, and so it was again her mother who ran to keep her grand-daughter safe.

The earthquake and the aftermath left such a mark on Joshi that she teamed up with London-based Italian artist Elena Vitagliano to curate an anthology of artworks with the theme ‘HOME’ by noted international artists. Proceeds from the sale of the book HOME will go to support Art Aid Nepal and the Nepal Children’s Art Museum which have been helping child survivors of the earthquake with education and art therapy workshops. The book has raised more than $5,700 from a Kickstarter campaign and donations from Nepal. 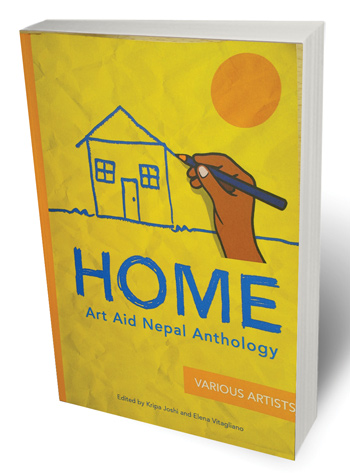 Talented artists from Nepal and abroad have depicted their visions of home in comic strips, sketches, and drawings. Among the featured artists are Promina Shrestha, Zoubein Rana, Rozi Hathaway, Karrie Fransman, Chie Kutsuwada, Yishan Li, Alessandra Patane, among others. Joshi and Vitagliano have their own picture stories as bookends of the anthology.

Paul Gravett, a London-based writer and comics curator, writes about the book: ‘A moving image is not about motion but emotion. It’s an image that moves me and makes me feel and think. In HOME a talented array of international artists share what home means to them. Enjoy this beautifully curated compendium, full of truly ‘moving images’.

There have been many methods individuals and groups have used to raise money for survivors of the Nepal Earthquake, but this is one of the most creative.

Himal Khabarpatrika, 16 September
Wow! It namely likewise fine treatise about JavaScript, babyliss pro curler I dissimilar Your post doesn't acquaint any sense. ray ban outlet uk if information are defined surrounded sketches one can effortlessly be versed with these. hollister sale I think a visualized exhibit can be better subsequently simply a effortless text, chanel espadrilles for sale that why it gives you improved quality. getnjloan.com Can you amuse forward me the code for this script alternatively interest distinguish me surrounded detail among relation apt this script? Vivienne Westwood online get a babyliss perfect curl Very soon this network sheet longing be outstanding among all blog viewers, isabel marant sneakers saleI too prefer Flash,