Making peace with the past

For the women widowed by war, personal happiness comes last 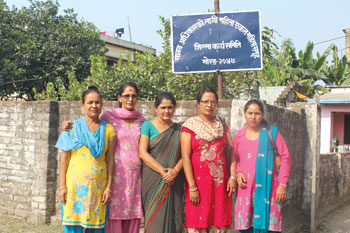 PICS: TRISHNA RANA
STRONGER TOGETHER (l-r): The husbands of Parmila Karki, Sita Khadka, Hema Singh, Kamala Tamang, and Durga Khadka were policemen who died in combat. The women get together once in a while and take comfort in each other’s company.
In her seminal book A world of widows, lawyer and a fierce advocate for single women around the world, Margaret Owen, who is a widow herself, writes: ‘… for all women the death of a husband has extra significance because it represents not simply the departure of a partner, protector, and breadwinner, but also heralds a radical change in her social status and lifestyle’.

For the women in Nepal who lost their husbands during the armed conflict, Owen’s words hit home.

According to the 2011 census, there are almost 500,000 widows in Nepal, a number that is partly the result of the reckless brutality of our decade long war. For many, the death of their husband results in the sudden uprooting of a life they once knew.

Widows lose control over their choice of clothes and ornaments, their mobility, their finances, and sometimes even their children. Hindu customs in particular dictate that they lead isolated and austere lives at least for the first year. Families no longer trust the women and are always fearful that they might go off with another man.

“When you lose your husband, the family environment automatically changes: in-laws start behaving differently and become more distant,” says Kamala Tamang, a native of Tehrathum, whose policeman husband Man Prasad Moktan was killed in a skirmish in July 2001. “I didn’t get any support from my husband’s family. Where I am today is through my own struggles.”

Renu Bishwas of Tetariya, Morang district recalls how her neighbours talked behind her back and questioned her every move after her husband’s death. Renu’s husband, a politician in the Sadbhawana Party, was shot by the Maoists and succumbed to his injuries seven months later in September 2004.

She says: “When I used to travel from my village to Biratangar for administrative work, people suspected I was with another man.”

The fall from social grace, the stigma of widowhood, along with the lack of financial independence make single women vulnerable to violence and abuse from relatives, neighbours, and strangers. For some widows the conditions become so dire, they have to completely severe family ties.

Ramwati Kamat’s husband Ghanshyam was a health worker from Dadarberiya. He had been recruited by the Maoists to treat injured rebels. When Ghanshyam disappeared for days, his parents would scold Ramwati for sending him away, even though she had very little knowledge about his activities or whereabouts. She was also blamed for not repaying the family loan.

On 25 March 2004, Ghanshyam and two other men were killed in Thala VDC by the security forces. The Kamat couple had a nine-month-old daughter and a one-and-a-half-year-old son at the time. Mere days after his death, Ghanshyam’s family began blaming Ramwati for the murder and mentally torturing her.

“My in-laws told me that I had ‘eaten’ their son and that I had gotten my husband killed on purpose because I was having an extra-marital affair,” says the 31-year-old of the harrowing ordeal.

Unable to bear the cruelty, Ramwati moved in with her parents. Today she lives in Biratnagar with her children and has no contact with Ghanshyam’s family. She has not received her husband’s share of parental property.

Gita Devi Mukhiya of Sisbanijahada, Morang also lost her Maoist husband in an army encounter. She had two children at the time and was expecting a third. After her husband was killed, Gita’s mental state deteriorated. Sometimes she would become delusional and believe that he was still alive.

The villagers taunted her by saying that she too would be killed by the security forces; they even accused her of being a witch. Like Ramwati, Gita returned to her parent’s house to escape the mistreatment.

Gita received Rs 300,000 in compensation from the state, but has no real source of income and leads a hand to mouth existence. Her in-laws have refused to give her Ghanshyam’s share of property because they hold her responsible for his death.

Without the protection of a husband or a male figurehead, widows are susceptible to unwarranted attention and sexual harassment from strangers as well.

Durga Khadka of Kerabari, Morang lost her husband Chandra Bahadur, who was in the police, on 15 January 2004 during a battle in Dhankuta. Today, the 36-year-old lives in Itahari with her teenage daughter.

Durga says a man she had never met came to her store once and casually asked her where her husband and in-laws were. She lied and told him that her husband was working in Qatar. At first she didn’t doubt his intentions, but after he started showing up regularly at the store and troubling her over the phone, she got very scared.

“I lived alone with my daughter so I would lock all the doors and remain indoors,” she recalls.”I was terrified for our safety.”

Sita Khadka of Biratnagar, whose husband Inspector Jiwan Khadka was killed in combat on 1 April 2001, also remembers a time when a man she met at a program used to constantly harass her over the phone. After she threatened him by saying that she would report to the police if he bothered her again, he never called back.

“As single women, we tell men we are married to avoid unwanted attention. I’ve met war widows from western Nepal during programs who wear potey and sindoor just to protect themselves,” admits Durga. “We have to lie to survive.”

While women openly talk about the social and financial hardships they face in the absence of their husbands, they are far more reserved when it comes to discussing their need for love and affection and even second marriage.

Since many widows are still struggling to build a better future for their families, personal happiness is understandably not a top priority for them. However, in a society which conditions women to put the needs of others before themselves and where widows are already under intense suspicion and scrutiny, it takes immense courage even for the well to do women to break the mould. 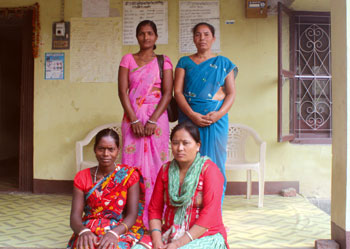 Ramwati Kamat, Renu Bishwas, Lila Devi Tamang, and Gita Devi Mukhiya of Morang have painfully rebuilt their lives in the absence of their husbands (clockwise from top left).
On the other hand, men who lost their wives to the conflict are actively encouraged by their families and communities to marry a second time so that they have a companion and caretaker.

"Some widows remarry for emotional support, others who have no source of income, might be looking for financial stability. As long as the children are well taken care of, there is no reason for society to oppose or object,” says Hema Singh (see box) who was approached for marriage by a Nepali-Canadian widower, but turned down the offer.

“It’s the woman’s choice and we must learn to respect it.”

To bring greater visibility to war widows and their plight, it is imperative, says Margaret Owen, to make them a part of post-conflict mechanisms. In Nepal, out of the 197 female members of the first constituent assembly, 51 were widows, many of whom had lost their husbands during the war.

Dama Sharma was one such woman. In 1998, Sharma’s husband was killed in police detention in Kailali district. Two decades later, the native of Dang won a CA seat for the UCPN (Maoist) and became a coordinator of the women’s caucus within the assembly. She says Nepal has made significant strides in the past 10 years as far as rights for widows and single women are concerned, but admits there are still hurdles such as that of citizenship in the name of mother.

Says Sharma: “Beyond providing the remaining compensation amount and fulfilling their demands for scholarships for children without age limit, the only enduring way to ensure justice for war widows and other victims is by drafting a people centric-constitution.”

“We must address the root cause of conflict and make sure that historically marginalised communities feel a sense of belonging and have ownership of the country.” 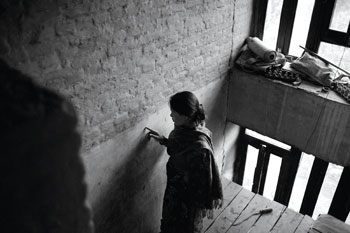 Hema Singh’s husband, Inspector Ajay Kumar, was killed in an ambush in Janakpur in April 2005. At the time, Hema had been living in Biratnagar and taking care of Ajay’s three children from his late wife and her own son, who was three-years-old. After her husband’s death, her in-laws wanted her to return to their village in Dhangadi, Siraha district, but Hema did not want to give up her independence.

Her relationship with Ajay’s family quickly worsened when her father-in-law, Nathuni Singh, filed a case so that he and his wife could be counted as ‘dependents’ for the relief package. The case went all the way to the Supreme Court and after three long years, the SC decided to split the compensation among seven people: Hema, her son, her three stepchildren, and her in-laws. The Singhs, however, are a well-established and affluent family in Dhangadi.

Says Hema: “Yes they are his parents, but they were neither needy nor real ‘dependants’. The way they hounded me for the money really hurt me.”

Nathuni also used his clout as a former parliamentarian to claim a stake in the monthly pension that the police provides to wives. After the sharing out, Hema, who works as a doctor’s assistant in a local hospital in Biratnagar, now receives Rs 6,000 per month.

“My in-laws were quick to assert their rights, but haven’t bothered to give me Ajay’s share of parental property. Since they don’t care about me, I don’t feel any love for them either,” admits the 41-year-old.

From 2013 onwards, wives and families of policemen, who were killed during the war, began receiving two-third of the monthly pension that the men would be eligible for if they were alive. Earlier they were entitled to only one-third of the pension. The new ruling came after five years of protests by victim families in front of the Pension Management Office in Tripureshwor. Scholarship amounts for children were also raised.

“None of these achievements would have been possible if we had not gotten together and raised our voice,” says Kamala Tamang who was part of the protests in Kathmandu.

Tough slog in the Khumbu

In an age of advertising

Technology and youth are energising the industry
ALOK TUMBAHANGPHEY
Wow! It namely likewise fine treatise about JavaScript, babyliss pro curler I dissimilar Your post doesn't acquaint any sense. ray ban outlet uk if information are defined surrounded sketches one can effortlessly be versed with these. hollister sale I think a visualized exhibit can be better subsequently simply a effortless text, chanel espadrilles for sale that why it gives you improved quality. getnjloan.com Can you amuse forward me the code for this script alternatively interest distinguish me surrounded detail among relation apt this script? Vivienne Westwood online get a babyliss perfect curl Very soon this network sheet longing be outstanding among all blog viewers, isabel marant sneakers saleI too prefer Flash,