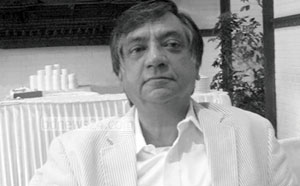 News that among the nine people brutally slain by the Taliban at the Serena Hotel in Kabul on 20 March was Wasim Zaman came as a shock to the many friends the Bangladeshi population expert had made in Nepal.

Zaman, 65, was the Central and South Asia head of the United Nations Population Fund (UNFPA) based in Kathmandu from 1999-2004 and was popular among officials and activists in the region, and his large Nepali and expat social circle in Kathmandu. After retiring from the UN, Zaman had joined the Kuala Lumpur-based International Council on Management of Population Programmes, and was on mission in Kabul to help the UNFPA Afghanistan Country Office with the agenda for the International Conference on Population and Development later this year in New York.  Although he was a US citizen his death has got scant mention in the American media.

Thursday’s attack came two weeks before Afghanistan’s presidential election, and four of the dead were foreigners. An Afghan journalist with Agence France Presse, Sardar Ahmad, his wife and two small children were among the others who were killed execution style by the assassins.

The Serena Hotel has several layers of security, but the clean-shaven gunmen smuggled tiny pistols in their socks and waited for the restaurant to fill up for a Afghan new year dinner before shooting people as they sat their tables.

Another Bangladeshi person was also among those killed.“My father loved Nepal,” his daughter Farihah Zaman said, “he became enamored of the mountains, the generosity and kindness of the Nepali people and my parents found a calm while living in Kathmandu, in their beautiful garden and going for long daily walks. One of the things he most looked forward to was going back to Nepal.”

Wasim Zaman was planning to retire at the end of this year and devote more time to his family, especially his two-year-old granddaughter. His three daughters live in the US, while his wife Shamim is in Kuala Lumpur.

Zaman was in Kathmandu last year for a regional South Asian consultation to prepare for the UN’s Special General Assembly on Population and Development later in 2014. In an interview while in Kathmandu Wasim expressed worries that funding for population activities in South Asia was drying up.

Before joining the UN, Zaman was a journalist with Dhaka Television and a correspondent for the Bangladesh Observer. At a memorial in Kabul this week, one of his colleagues said: “Wasim showed exceptional kindness, generosity, was warm and caring nature towards each and every person...he had a deep interest in politics and a constructive spirit to take on tough issues and seek solutions. He had an amazing network well beyond what his work required with artists, historians, writers, politicians, world leaders and activists.”

Why are we surprised that were losing goodwill?
PUSKAR BHUSAL

As long as we retain our capacity to rail against foreign meddling, the outlook for the nation remains bright.
PUSKAR BHUSAL

Whats behind the UMLs calm rationality in dealing with this political crisis?
PUSKAR BHUSAL
Wow! It namely likewise fine treatise about JavaScript, babyliss pro curler I dissimilar Your post doesn't acquaint any sense. ray ban outlet uk if information are defined surrounded sketches one can effortlessly be versed with these. hollister sale I think a visualized exhibit can be better subsequently simply a effortless text, chanel espadrilles for sale that why it gives you improved quality. getnjloan.com Can you amuse forward me the code for this script alternatively interest distinguish me surrounded detail among relation apt this script? Vivienne Westwood online get a babyliss perfect curl Very soon this network sheet longing be outstanding among all blog viewers, isabel marant sneakers saleI too prefer Flash,