No country for women

Nepal’s political transition is over, but there is no closure for victims of wartime rape
Shreejana Shrestha in KANCHANPUR

The Tharu woman’s daughter is nearly 15 years old. That is how many years have passed since she was raped by a group of Royal Nepal Army soldiers. That is also the number of years she has waited for justice.

She thought the culprits would be caught when the war ended, and that they would finally be taken to court when the Maoists were elected to power in 2008. She waited throughout the 11 years of political transition for truth, justice and compensation.

“I get very anxious about my past because I am not guilty. I have neither been compensated, nor have those who did it to me been caught,” says Chaudhari, her eyes burning with fury.

Her husband was away when 25 soldiers drove up in a van, entered her home and beat her up. “Then they took turns to rape me," she recalls. "I am lucky to be alive.”

She battled the ensuing trauma on her own, adjusting to ostracisation by her community which got worse when she got pregnant.

“I have spent a lot of money on my treatment, I could do with a little help, the government should tell me once and for all if I will get compensation or not, since others have,” she says.

Nepal has come a long way after the war ended in 2006. The monarchy was abolished, there were two elections to Constituent Assemblies that framed a federal secular constitution. Under the peace process the Maoist guerrillas were demobilised, some of them were integrated into the Nepal Army. For many the political transition is over, but not for war survivors like Chaudhari here in the plains of western Nepal which saw massive human rights violations by both sides.

Wartime rape victims are off the government radar, abandoned by their husbands, ostracised by their families and society. The state, which is made up of the warring sides, has excluded rape in the interim relief process and in transitional justice.

There is no accurate data on wartime rape because many victims are still afraid of social stigma. There is a lack of social protection, and many are poor. The statute of limitation, that has now been extended to six months, has been another hindrance.

Advocacy Forum-Nepal alone has documented and worked with at least 250 cases of conflict rape. Around 300 cases have been registered at the Truth and Reconciliation Commission (TRC), where Madhavi Bhatta says: “First the registered rape cases need to be established through investigation and later we will recommend them for reparation.”

When asked about how long that will take, she replied, “The process will definitely take years since the investigations have only just started.”

Last August, the UN’s human rights committee for the first time intervened in the wartime rape case of Purna Maya and urged Nepal to investigate it. Although it was a landmark decision, there has been no response from the government side.

Om Prakash Sen of Advocacy Forum-Nepal says the government has always ignored the demand for justice and reparations from wartime rape victims.

Jhapad Bohora a Maoist MP from Karnali Province told Nepali Times creating jobs for the victims of sexual violence will be a top priority of the provincial government.

“Apart from jobs we will also provide free education to their children,” says Bohora, who has been appointed finance minister for a province which has the highest number of disappeared people and victims of wartime rape.

My life became upside down in 20 minutes. After I was raped by a group of Maoists, my husband left me and never came back. He used to work in India, and I was happy. My husband said as a Brahmin I had “tainted” his family’s reputation and he could not accept me anymore. He felt humiliated for something that did not happen to him, and for which I was not responsible. Raising the children alone has been financially and socially difficult. Neighbours treat me differently, and I have often contemplated suicide, but i've pulled back because of my sons. As they grow up, I am worried that they will also shun me. It was the Maoists who committed the crime 13 years ago, yet why am I being treated like the guilty one?”

“They went after murderers, but not the rapists.”

My husband and I were on our way to my maternal home one evening 15 years ago when two soldiers stopped us. They threatened my husband with guns and raped me in front of him. They suspected us of supporting the Maoists. I had a miscarriage and was in pain for years because of infections. Just the memory of it tortures me, and gives me severe headaches. The community ostracised me, people still hurl insults at me. But I am lucky I have a supportive husband. All these years, I have been waiting for the government to provide us relief that never came. Justice is a lost cause. They went after the murderers, but never the rapists.

“I didn’t kill myself for the sake of my children.”

I had been married for just six months when I was raped. The soldiers came in three vehicles, beat me and then raped me in turns. They suspected we had hidden weapons. My husband and in-laws threw me out of the house even though I was pregnant. I got married again. Now, my current husband also says he would have never married me if he knew about the rape. He is a drunkard. If I hadn't been raped, I would be raising a happy family now. I feel most miserable when people mock me. I often think of committing suicide, but I don’t have the courage. I am surviving just for the sake of my children. I approached the government for compensation, they made me go everywhere. In the end they said there is no compensation for rape victims.

“Society will never accept me.”

I have a hazy recollection of a group of soldiers entering our house on 17 August 2004. Then they beat me so mercilessly I became unconscious. When I came to, there was blood all over my thigh. They had used condoms, so I did not conceive. They killed my husband too, saying he died in an exchange of gunfire. After hospital treatment in Kathmandu, I could walk again. I am not as strong as before, I still have abdominal pain. Although neighbours don’t say bad things in front of me, they don’t think I am good enough to fit back in society. They will never accept me.

“Now, my body can cope with any pain.” 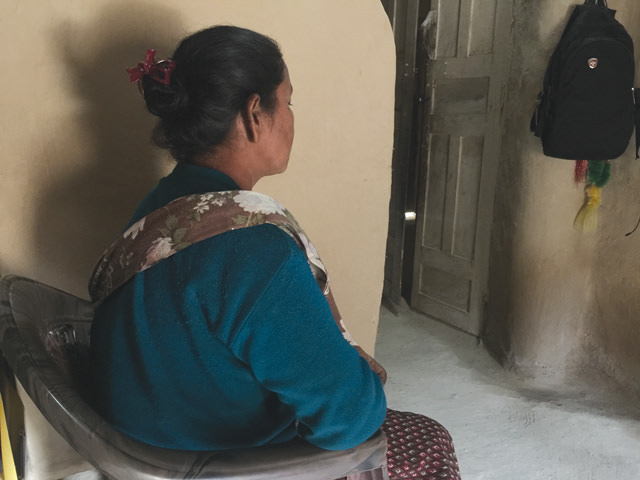 After the rape, my husband has been mistreating me. He accuses me of having affairs. Initially he supported me saying whatever happened wasn’t my fault, now he is ashamed of me. I lost my dignity and happiness. I was raped by two soldiers who entered our home, and forced me to undress. I was so afraid I could not even shout for help. Other victims of the insurgency have received compensation but I haven’t got anything. I try to have positive thoughts, but I am haunted by the rape every day. I have health problems, I feel isolated and frightened. My husband beats me up, but having survived the rape my body can cope with any pain.

Rape as a weapon of war, Tufan Neupane

2-16 November
Wow! It namely likewise fine treatise about JavaScript, babyliss pro curler I dissimilar Your post doesn't acquaint any sense. ray ban outlet uk if information are defined surrounded sketches one can effortlessly be versed with these. hollister sale I think a visualized exhibit can be better subsequently simply a effortless text, chanel espadrilles for sale that why it gives you improved quality. getnjloan.com Can you amuse forward me the code for this script alternatively interest distinguish me surrounded detail among relation apt this script? Vivienne Westwood online get a babyliss perfect curl Very soon this network sheet longing be outstanding among all blog viewers, isabel marant sneakers saleI too prefer Flash,