Panic spreads on the sidewalks of the Kotaraya area of the Malaysian capital Kuala Lumpur as immigration police sweep in during one of their raids on undocumented migrant workers. There is a palpable fear in the air as those without documents attempt to flee, and are whisked away. But there is also a sense of solidarity among migrant workers as they urgently call out, warning others to run. 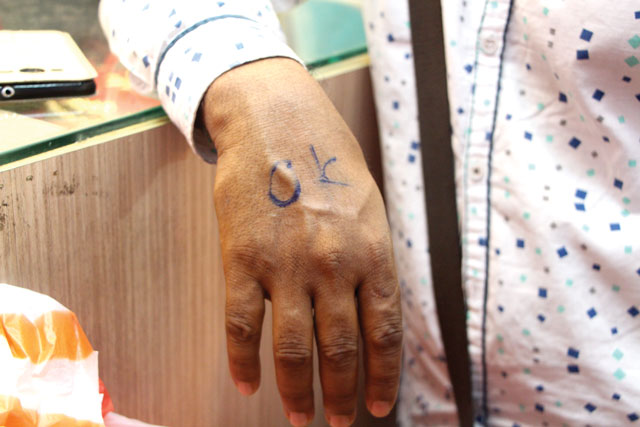 If migrants are able to show required documents during a raid, ‘OK’ is scrawled on their hands.

Mahesh worked as a security guard doing 12-hour shifts, but after passing out a few times due to the heat, he decided to quit. His employer refused him treatment, or to give him his passport so he could return to Nepal. Instead, he was locked up and abused. It got so unbearable that one day Mahesh jumped out of the second-floor window. By the time he landed on his feet, his status had changed to ‘undocumented’.

There are thousands of Nepalis like Mahesh in Malaysia. Like him, they prefer to be undocumented than be exploited and mistreated by their official employers.  They enter Malaysia legally, but prefer to quit difficult, low-paying jobs and leave their passports behind, even though they know the risks of being undocumented.

When Ram realised that the ‘company job’ he had signed up for was a D3 (dirty, dangerous and demeaning) and required heavy lifting in front of a furnace 12 hours a day, he asked his boss to let him go. The employer demanded $1,500 which Ram could not pay. Then there is Amish, who asked to go home after he heard that his father had died. His boss refused, even when Amish offered a month’s salary as guarantee.

The push to become undocumented starts in Nepal, with recruiters who shape the expectations of the foreign dream among desperate aspirants. They lure workers with company names like Samsung, Panasonic and McDonald’s, but send them to manpower supply companies. They exaggerate overtime earnings, which migrants rely on because this can sometimes add up to 80% of their base salary. 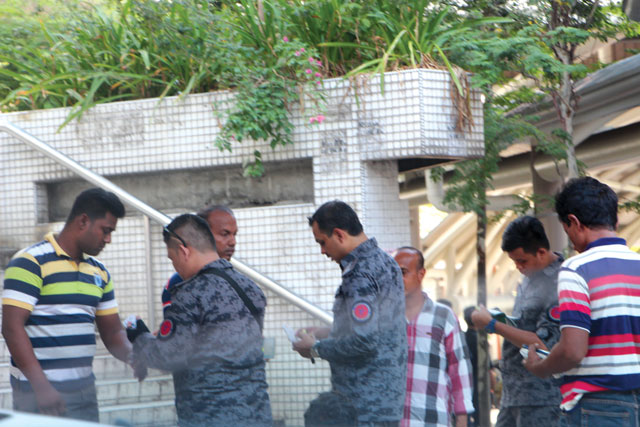 But most migrants find themselves trapped when they land jobs with lower salaries than promised and no overtime. On top of that, they are also expected to pay part of the rent, food, levy and utilities from their earnings.

Rita, a recent runaway, found out she would not get the promised overtime and had to pay other fees as well. For every small mistake at her job in a fish factory, her employer deducted $15-30 from her salary. She escaped before her contract ended and joined the ranks of the undocumented.    With loans adding up back in Nepal, returning prematurely is not an option for many migrants. There is also the pressure of expectations from family, who collectively decide to send members abroad by selling assets or taking loans.

“My family does not know about my situation. Returning to Nepal early can be an embarrassment and you are seen as a failure in the community, so I wanted to stay longer even if it meant being undocumented,” says Gautam.

Even when bosses are kind and jobs decent, some migrants prefer to be undocumented. Hari works in a security company and knows of a Nepali who recently fled a job after being warned several times for showing up late and for his drinking habits. Hari explains: “When a worker doesn’t perform well at work despite three warnings he can be sent back, and he knew he was getting close to that point. So he escaped.” 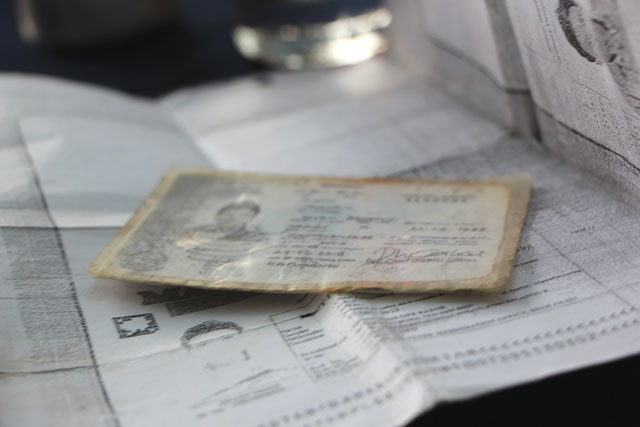 Pics: UPASANA KHADKA
When migrants run away from their employers leaving their passports behind, photocopies of their passports and, if lucky, their original citizenship, are their most prized possessions.

Ram admits he left his official job as a cleaner after he heard he could earn more as a security guard. On the other hand, Nisha quit her job in Johor Bahru so she could be with her husband in Kuala Lumpur: both now work in neighbouring restaurants run by Nepalis.

In the monopsony of the labour market, employers wield significant power over migrant workers who lack safety nets and are unaware of their legal rights. Documented migrant workers have ‘OK’ scrawled on their hands by police, while undocumented ones are handcuffed and taken away.

Bharat owns a manpower company that sources Nepali workers, and says recruiting a foreign worker legally involves multiple trips to the immigration office for permits and fees. The whole process can be expensive, costing employers up to $1,200 per worker, and there is much uncertainty about what type of worker they will get in return. 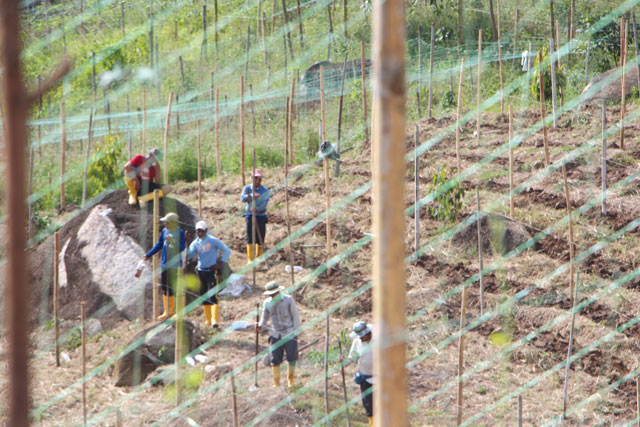 Undocumented workers from Nepal on a farm run by a fellow Nepali who has lived in Malaysia without papers for a decade.

“So, employers and recruiters just hire undocumented workers locally and insulate themselves from all legal responsibilities,” explains Bharat. “Plus, language skills and familiarity with Malaysia among undocumented migrants can also be a plus point.”

However, undocumented workers are vulnerable to exploitation. Tika has had eight jobs in the last five years because of unpaid wages and abuse. But he still prefers this to his legal employer, who made him work 18 hours a day for just $150 a month, locking him in his apartment during off-duty hours. He says: “At least I know I have nothing to lose because if the next employer becomes abusive or unfair, I can just leave.” Realising that workers like Tika without passports can be flight risks, employers often keep a couple of months’ salary as a guarantee.

Staying on as undocumented workers has worked out well for others. Ram has lived in Malaysia without proper papers for over a decade, and has leased land to grow vegetables. It has become a profitable enterprise, and he now provides refuge and jobs for other undocumented workers like him.

“Locals do not want this job and need us, yet they hound us. When there is a raid, we just escape into the forests,” says Ram, who feels relatively safe living on the outskirts of the city. 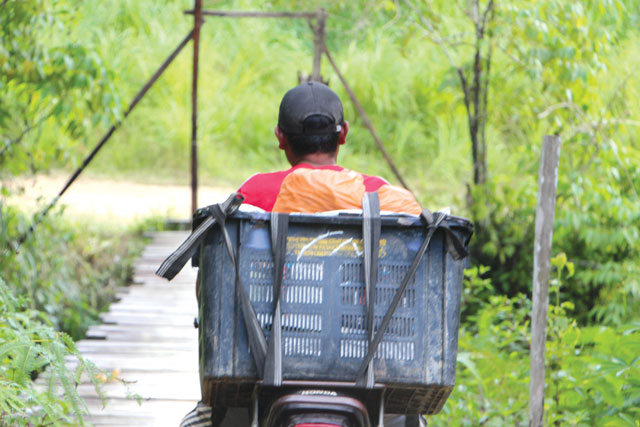 An undocumented Nepali migrant worker taking vegetables to a road for pick-up.

Malaysia recently introduced a new program for employers to rehire undocumented migrants. However migrants are reluctant to participate because they have to pay a levy. Plus, given that the permit is valid only till the end of 2018, many don’t want to come out in the open.

Undocumented workers like Nisha are risk averse and prefer to stay indoors at all times at the restaurant where she works. She says that living in the shadows within the confines of her room is a small price to pay for being able to spend time with her husband and to send money home for her daughter’s education. There are others like Ram, an undocumented security guard pulling multiple shifts, who tries to live a normal life to the extent possible and shares: “I know what streets to avoid and how to handle myself during police raids.”

Adds Ram: “The police shove us into their car and take us for a drive around the neighbourhood. We stay calm, make an offer and they let us go. Anything is possible with money in Malaysia.”

With crackdowns on undocumented workers and the depreciation of the ringgit, many Nepalis have decided to return to Nepal. They can exit Malaysia without a passport if they have temporary travel documents, but will be slapped a five-year entry ban. The documents are supposed to cost only $360, but an agent will charge $600. Even going home costs three months of income on average. “We took a big loan to come here thinking we could send money home, but instead are having to ask our families to send us money so we can return,” says Mahendra. 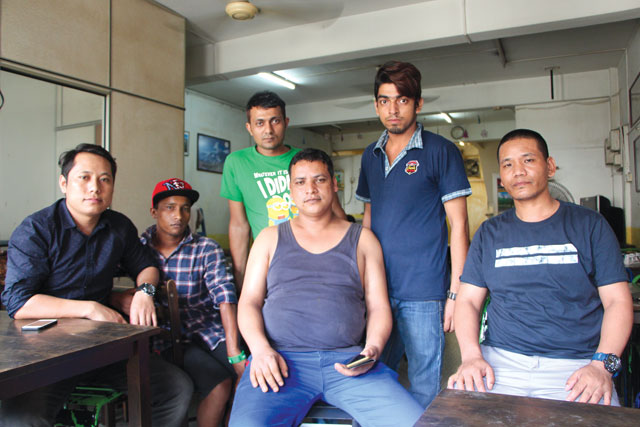 Migrants at a hotel in Kotaraya waiting for papers from their agent. “It can be today, tomorrow or next week... who knows?”

A less common alternative for undocumented migrants wanting to leave is to pay for a ‘counter setting,’ which entails bribing an airport immigration officer, also facilitated by agents for over $800. But Binod, a Nepali restaurant owner who moonlights as an agent helping returnees, says the number of counter settings have decreased after authorities tightened up.

Using the first option, five undocumented Nepali security guards were on a recent flight to Kathmandu after not being paid for four months by a fellow-Nepali recruiter. “Living without money despite working hard got unbearable so we left,” says Ramesh, showing a timesheet with over 100 hours a week clocked in. Adds Krishna: “We consider ourselves lucky because at least we could leave.”

Suraj was undocumented for two months before being caught in an immigration raid then locked up with 90 inmates in a small room. “There wasn’t enough food and we got skin rashes.”   Adds Ratna, who spent nearly four months in prison before being deported: “I will never forget 1329, my jail number. I was so excited to go home we walked out of Kathmandu airport barefoot, but it did not matter because we were home and free.” 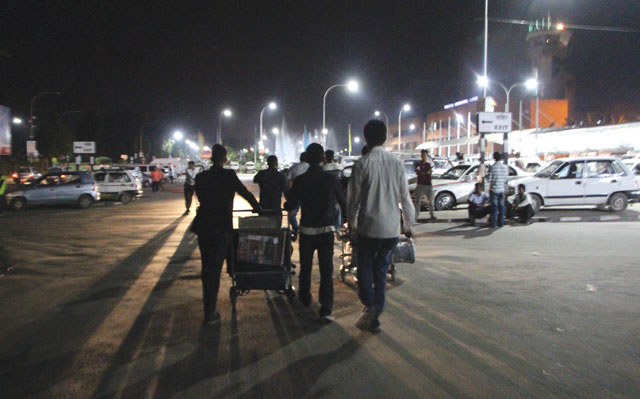 Undocumented workers arrive in Kathmandu where they will stay for a couple of nights before they go home to Panchthar. They are banned from Malaysia for five years, but have no intention of going back.

The Nepal Embassy and family members help immigration detainees to be repatriated, but there are 600 others in Malaysian jails who do not have the connections to be rescued, and 238 more are waiting for support to get air tickets home.

Back in Kathmandu there is no help to reintegrate these former migrant workers into society and deal with the trauma of forced deportation. Left on their own, returnees are disoriented and demoralised.

With its 100,000th biogas plant commissioned, Nepal is now the worlds number one in alternative farm energy systems.
MAARTEN POST

Our columnist finds that police mistreatment of janjatis lends itself to Maoist recruitment better than any bygone ideology.
DANIEL LAK

Shekhar Golchha-Managing director Golchha Organisation
Wow! It namely likewise fine treatise about JavaScript, babyliss pro curler I dissimilar Your post doesn't acquaint any sense. ray ban outlet uk if information are defined surrounded sketches one can effortlessly be versed with these. hollister sale I think a visualized exhibit can be better subsequently simply a effortless text, chanel espadrilles for sale that why it gives you improved quality. getnjloan.com Can you amuse forward me the code for this script alternatively interest distinguish me surrounded detail among relation apt this script? Vivienne Westwood online get a babyliss perfect curl Very soon this network sheet longing be outstanding among all blog viewers, isabel marant sneakers saleI too prefer Flash,