Trekking trails half-full… at least not half empty

Despite predictions that Nepal’s tourism industry would collapse due to the earthquake, the real damage has been done by the Indian blockade. Even so, some of the trails like the Everest and the Annapurna regions which were not so badly affected by the April earthquake are seeing healthy traffic.

There is considerable trekking traffic along the Everest trail, with about 12 flights every morning from Kathmandu to Lukla. In the peak season last year there were sometimes up to 30 flights a day. Lodges along the way say they are seeing half the number of tourists as in normal times, and admit their real problem is the shortage of cooking gas.

The entrance to the Sagarmatha National Park used to see up to 200 trekkers per day during the peak season last year. Park authorities say the figure is down by 50 per cent this year. 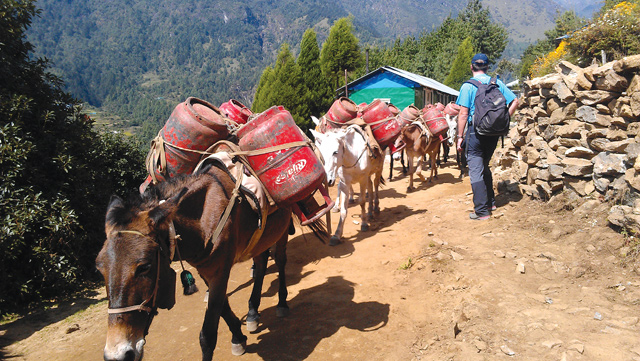 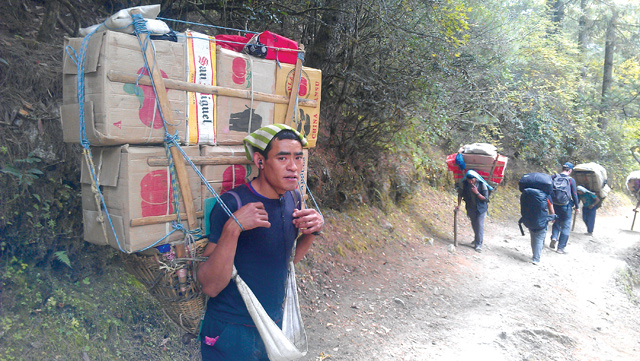 Bhakta Tamang, 32, carrying 90kg on his back to Namche from Lukla. He is paid Rs 25 perkg. 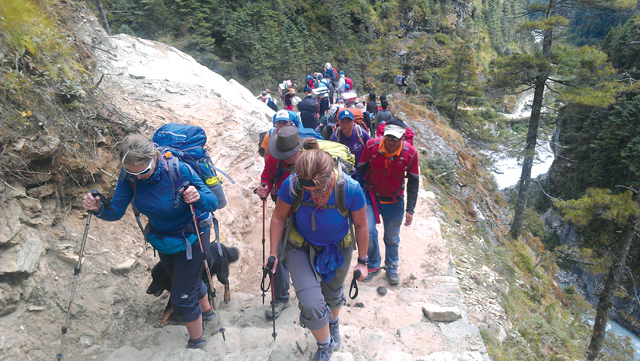 Tourists on the Lukla-Namche trekking route in Khumbu region this week. 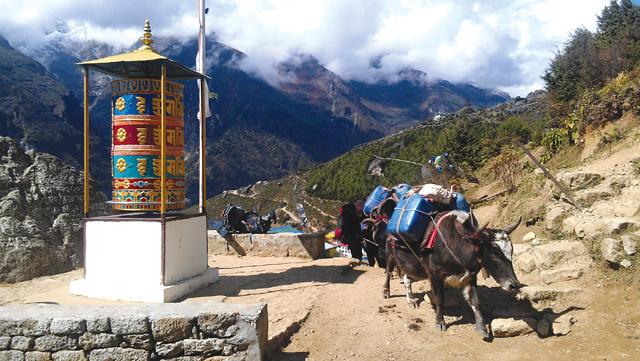 Yaks carrying food and trekking gears towards Everest Base camp. 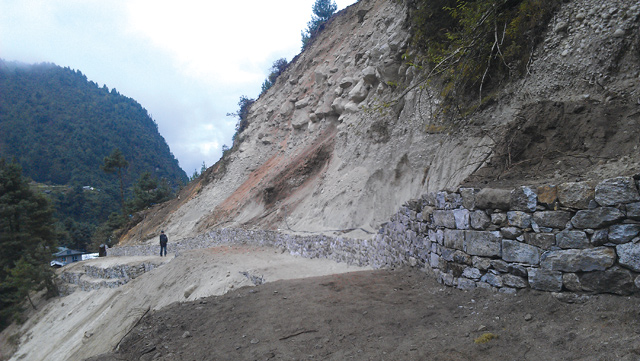 This landslide damaged the trekking trail near Phakding, but has been repaired. Most other trails are intact.

Busy in the Annapurnas 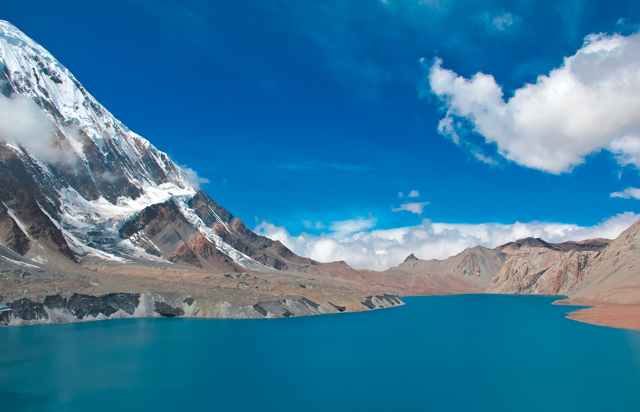 Despite the earthquake and the Indian blockade, and dire predictions about dismal tourist arrivals, the trekking trails around the Annapurnas are surprisingly busy this season.

Although the figures are not as high as this time last year, a substantial number of tourists have still come to hike after informations read that the trekking routes had not been damaged by the April earthquake.

Between January and September of this year, 53,208 tourists visited the Annapurna region, a sharp decline from the 69,488 tourists it received in 2014. In the immediate aftermath of the earthquake, only 1,066 tourists were recorded in May whereas 9,578 tourists visited during the same time last year. 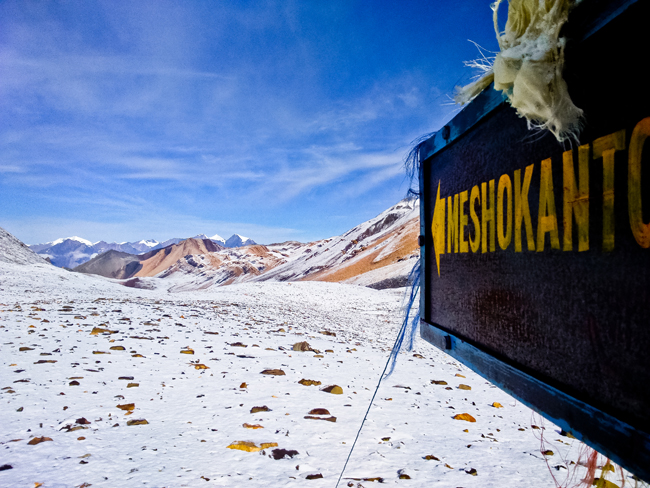 In Manang and Mustang, lodges aren’t full, but there are tourists. According to Pranaya Rana, who recently trekked up to Tilicho Lake in Manang, the Tilicho Base Camp Hotel in Khangsar was full, with at least 15-20 people sleeping in the dining hall because they couldn’t get rooms. However, most of the visitors were foreigners and the number of Nepali trekkers is still low. In October, 2,183 tourists visited Manang, compared to 4,517 last year.

In Lo Manthang, tourists were scattered around lodges during the annual Yartung festival in August, and the region received only 1,717 tourists in October. However, ACAP figures showed that the numbers are steadily increasing. ACAP registered 5,353 trekkers in the region in September alone.

Tourism is down but not out, Om Astha Rai

Just some simple steps could make you king of the green

Rajdhani, 20 October
Wow! It namely likewise fine treatise about JavaScript, babyliss pro curler I dissimilar Your post doesn't acquaint any sense. ray ban outlet uk if information are defined surrounded sketches one can effortlessly be versed with these. hollister sale I think a visualized exhibit can be better subsequently simply a effortless text, chanel espadrilles for sale that why it gives you improved quality. getnjloan.com Can you amuse forward me the code for this script alternatively interest distinguish me surrounded detail among relation apt this script? Vivienne Westwood online get a babyliss perfect curl Very soon this network sheet longing be outstanding among all blog viewers, isabel marant sneakers saleI too prefer Flash,