Ueli Steck, 40, who was known as the ‘Swiss Machine’, died after falling more than 1,000m as he was ascending Mt Nuptse 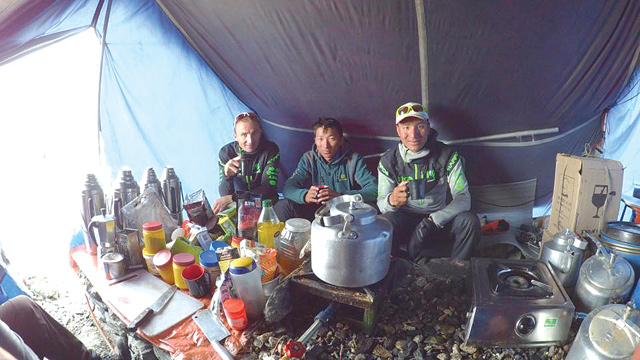 TOGETHER ON TOP: Ueli Steck (left in the main pic) with Nima-Gelu and Tenji Sherpa in the kitchen of their camp on 20 April as they prepared to attempt a summit of Mt Everest.

A shadow descended on Nepal’s Spring 2017 climbing season this week after the death of Swiss mountaineer Ueli Steck on Nuptse on 31 April.

Steck, 40, who was known as the ‘Swiss Machine’ for numerous record-setting climbs in the Alps and beyond, died after falling more than 1,000m as he was ascending Mt Nuptse. He was reportedly acclimatising for a summit of neighbouring Mt Everest to be followed by a traverse to adjacent Mt Lhotse, all without supplemental oxygen. In 2012, Steck climbed Mt Everest without oxygen.

Steck’s death casts a pall over other notable expeditions this climbing season, which has a record number of climbers challenging Mt Everest. Among these is an attempt to reach the top of Mt Kanchanjunga, the world’s third highest mountain, by three Nepali women: Maya Sherpa, Pasang Lhamu Sherpa Akita and Dawa Yangzum Sherpa. The three previously climbed Mt Everest and K2 in Pakistan, the world’s second-highest peak.

“Steck was climbing alone, so we don’t know what happened,” Ang Tshering Sherpa of the Nepal Mountaineering Association told Nepali Times. “Perhaps he slipped on the ice, or there was a rock fall.”

Noted mountaineering chronicler Elizabeth Hawley of the Himalayan Database (see box) said Steck always climbed alone, which led to some questions about his claimed achievements. This included his solo summit of the south face of Annapurna I in 2014, for which he was awarded his second Piolet d’Or (Golden Ice Axe award) for mountaineering.

“He said he didn’t give a damn if anybody believed him or not, and I think that was true: he climbed for himself,” said Hawley, who had interviewed Steck many times. “He was mild-mannered and pleasant, and being alone on the mountain wasn’t an unreasonable risk for someone of his skills. It’s possible that something fell and knocked him off the mountain: we’ll probably never know,” she added. 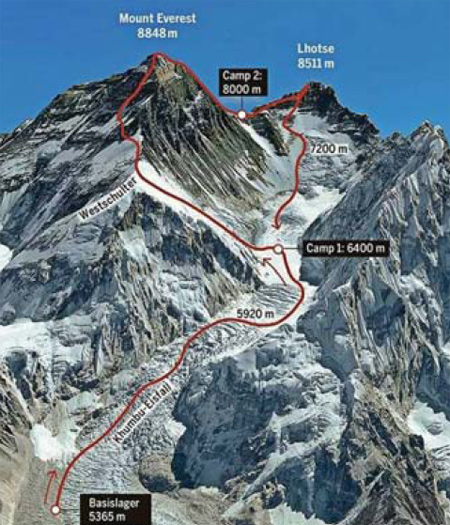 Hawley’s colleague, and climber herself, Billi Bierling, was working on a translation of Steck’s latest book when she heard the news, and wrote in a tribute to her friend: ‘What I liked about Steck was his modesty and the fact that despite his amazing achievements he was down to earth – never arrogant.’ 2017 could be a record climbing year because expeditions scheduled for 2014 and 2015, which were cancelled because of an avalanche on Mt Everest and the earthquakes, respectively, have been rescheduled.

Other notable climbs this year include an attempt by David Goettler of Germany and Italian Hervé Barmasse on the south face of Mt Xixapangma, just north of the border in China and the 14th highest peak in the world. Bad weather forced them to abandon the route last year. Nepal’s Min Bahadur Sherchan, 85, will be making another attempt to break the record as the oldest man on Everest. Blind Austrian climber Andy Holzer is back on Everest after turning back after the 2014 and 2015 disasters.

Also, Spanish ultra-marathoner Kilian Jornet will be making a second try at setting a new speed record for climbing Mt Everest from the Chinese side. But Hawley said she had little time for speed records, which are made to be broken: “The first one to set a record is a pioneer. The next ones are succeeding based on his experiences, his successes.” Marty Logan 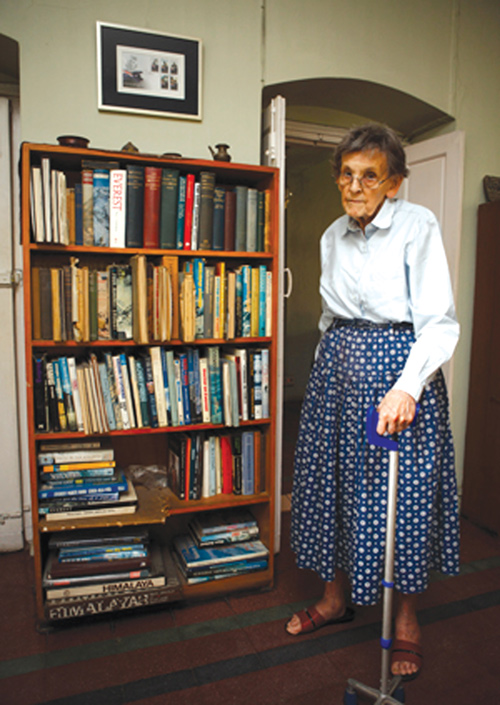 Since the first US expedition to Mt Everest in 1963 until recently, Kathmandu-based journalist Elizabeth Hawley met every year with every climbing expedition that claimed to have climbed a peak in Nepal, quizzing them in detail and taking meticulous records. The result is the Himalayan Database, which has records of all expeditions in the Nepal Himalaya since 1905.

The database includes 454 mountains, and is supplemented by information gathered from books, alpine journals and correspondence with climbers. Besides Nepal, there is information on expeditions on both sides of border peaks such as Everest, Cho Oyu, Makalu and Kangchenjunga. Data on expeditions to trekking peaks are included for early attempts, first ascents and major accidents.

The database is searchable by peak, climber, expedition, nationality, season, mortality rates and causes and more. It includes selected pre-set reports plus capability for custom searches and analyses, and literature references to journals, books and published expedition reports.

In government and private sector, we confuse governance with management
ASHUTOSH TIWARI

Domestic league players are spending more time serving suspensions than on the field
SANTA GAHA MAGAR
Wow! It namely likewise fine treatise about JavaScript, babyliss pro curler I dissimilar Your post doesn't acquaint any sense. ray ban outlet uk if information are defined surrounded sketches one can effortlessly be versed with these. hollister sale I think a visualized exhibit can be better subsequently simply a effortless text, chanel espadrilles for sale that why it gives you improved quality. getnjloan.com Can you amuse forward me the code for this script alternatively interest distinguish me surrounded detail among relation apt this script? Vivienne Westwood online get a babyliss perfect curl Very soon this network sheet longing be outstanding among all blog viewers, isabel marant sneakers saleI too prefer Flash,