Gyani Deula, a homeless temple-dweller known for her love and compassion towards stray dogs, passed away Sunday

Gyani Deula, a homeless temple-dweller known for her love and compassion towards stray dogs, passed away at the Ganesh Temple in Kamaladi Sunday morning. She was 56. 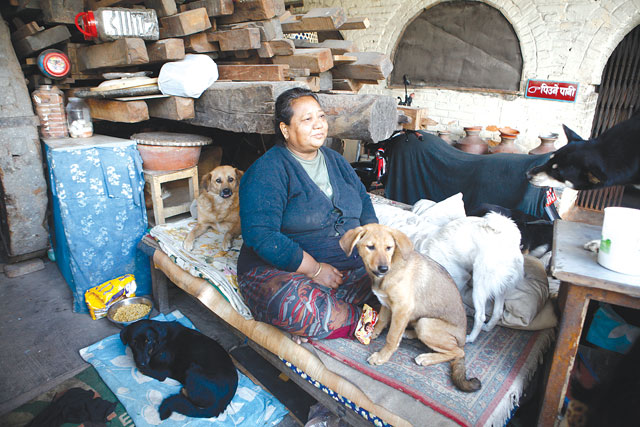 In November 2012, Nepali Times profiled Deula in an article titled ‘The Dog Mother’, the moniker stuck and charities carried out fund-raisers her and her four-legged friends.

Deula had been living at the temple after being abandoned by her family, and earned money selling flowers most of which she spent to buy food for her beloved dogs every day.

“It’s difficult, but I will provide for them until I die, they are my family,” she had told Nepali Times in an interview in 2012. “I worry about them once I am gone, what will my babies do? Who will feed them and love them?”

As Gyani Deula anticipated, the dogs are now helpless yet again. They are hungry and waiting for their mother – probably unaware that Deula has left them forever. When her body was being taken to the funeral on sunday, some of the dogs tried to follow the van.

Deula started adopting dogs after she found abandoned puppies in a carton dumped near the temple in 2009. Through the years her canine family grew.

Gyani Deula had signed a will to donate her eyes and a team from Tilganga Hospital extracted her corneas before her cremation. After the news about her death spread on social networking sites, many who knew of her compassion and devotion to dogs went to Pashupati Aryaghat to attend her funeral and bid her goodbye.

The animal welfare group Animal Nepal is planning to build a temporary shelter for the dogs, and until then to send a volunteer to feed them daily at the Ganesh temple.

RNAC has always been proud that it is less bankrupt than Indian Airlines
ARTHA BEED
Wow! It namely likewise fine treatise about JavaScript, babyliss pro curler I dissimilar Your post doesn't acquaint any sense. ray ban outlet uk if information are defined surrounded sketches one can effortlessly be versed with these. hollister sale I think a visualized exhibit can be better subsequently simply a effortless text, chanel espadrilles for sale that why it gives you improved quality. getnjloan.com Can you amuse forward me the code for this script alternatively interest distinguish me surrounded detail among relation apt this script? Vivienne Westwood online get a babyliss perfect curl Very soon this network sheet longing be outstanding among all blog viewers, isabel marant sneakers saleI too prefer Flash,