Survival of the altruistic 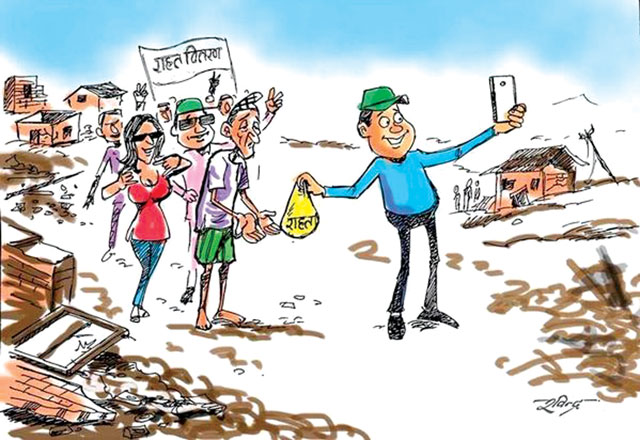 Three weeks ago a column in this paper disapproved of people increasingly sharing relief selfies on social media to seek validation, and an effort to be ‘mini-celebrities’. The piece generated a lively debate about the pros and cons of publicising charity work.

Many readers wrote back saying that the display of helpful acts encouraged others to join in to help, and to prove to others that they were doing work on ground. A similar argument was made that lop-sided media coverage that highlighted suffering and misery in fact helped in fund-raising for earthquake survivors.

“I believe we should help those in need because someday I may need help too. The universe balances everything,” said Jovan Paunovic, an entrepreneur from Serbia who supported Nepal during the earthquake without making it a big post on social media. “But does altruism really exist? I guess it’s a philosophical discussion.”

Studies have shown that any form of charitable act increases the level of the hormone oxytocin -- the ‘feel good’ hormone also called the love, hugging or holiday hormone since it tends to be secreted when someone is helping others. Helping others also triggers secretion of dopamine and endorphins.

The definition of altruism is the belief in or practice of disinterested and selfless concern for the well-being of others. There are many benefits to being altruistic: it promotes the emotional, mental, physical and spiritual well-being of a person. It helps build connections and relationships, and altruistic people live longer lives.

Prajesh Shrestha of the Kathmandu-based non-profit Daayitwo said, “ I felt surviving the earthquake gave us a second life and people needed immediate help. At a time like this, it may be okay to help and promote oneself but we did not think of it that way.”

Overall, the act of giving uplifts our consciousness. So, if helping others makes us feel good does it defeat the whole point of selfless help? We could feel happy and perhaps choose not to plaster it on social media.

Manish Shrestha of Kazi Studio who went to Chunikhel on 26 April said, “The reason I took a picture of my friend and posted it on Facebook was because I thought what he was doing was good and the world needed to see it.”

Shrestha does not judge people who post their own pictures. “If self promotion is their motivation to help, it is better than no help -- it just wasn’t my motivation,” he added.

Oxytocin boosts one’s self esteem and confidence, which could be one reason why people think it is acceptable and normal to inform family and friends of their contribution to the community, country and the world.

Sagun Joshi of Global Bank added, “Making the world aware of the disaster and the condition of Nepal is helpful but I am not particularly satisfied with showing everyone what one has done.”

A University of Amsterdam study, however, shows that higher levels of oxytocin while prompting people to show special treatment towards their own community, can also cause aggression towards competing groups. Could this be the reason why some people feel the need to help more than their rivals?

From a classical economic perspective, altruism may not exactly make sense but from an evolutionary point of view research has shown that individuals only exhibit altruistic behaviour to make themselves more effective and stronger with more long-term benefits. Even Darwin suggested that altruistic groups may have a greater chance of survival.

Said Francisco Lopez, Sergeant at United States Marine Corps who was in Nepal during the 25 April earthquake: “I helped because I have the knowledge and training. It is not something I think about, for me, helping is a natural and subconscious reaction to a need. I didn’t think to tell anyone what I did.”

I help, therefore I am, Anjana Rajbhandary

The path to altruism, Matthiew Ricard

Balkrishna Basnet in Kantipur, 9 August
Wow! It namely likewise fine treatise about JavaScript, babyliss pro curler I dissimilar Your post doesn't acquaint any sense. ray ban outlet uk if information are defined surrounded sketches one can effortlessly be versed with these. hollister sale I think a visualized exhibit can be better subsequently simply a effortless text, chanel espadrilles for sale that why it gives you improved quality. getnjloan.com Can you amuse forward me the code for this script alternatively interest distinguish me surrounded detail among relation apt this script? Vivienne Westwood online get a babyliss perfect curl Very soon this network sheet longing be outstanding among all blog viewers, isabel marant sneakers saleI too prefer Flash,