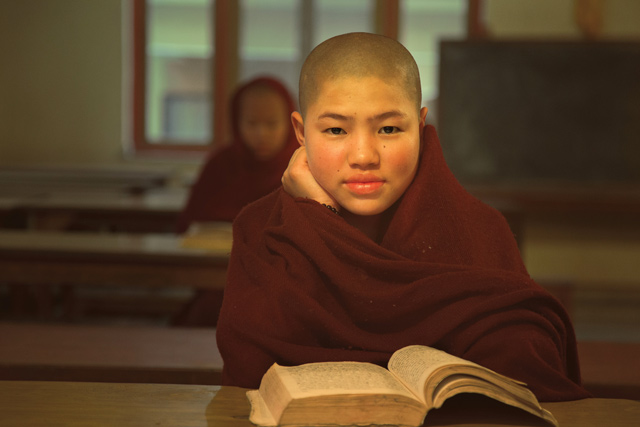 The Sorcerer Supreme, who has supernatural powers in the Hollywood blockbuster shot partly on location in Kathmandu Doctor Strange, has given nuns from Nepal a veil of infinite mystery. In reality, novice nuns at monasteries in the Valley cannot make magic, but are treated on an equal footing with monks in both education and martial arts.

A historic milestone was set in Buddhist society last month as 20 nuns, including two from Kopan Monastery in Kathmandu, were conferred the Geshema, the highest academic degree awarded in Tibetan Buddhism. Since it was only given to monks before, the degree marks a new chapter in empowerment and education of nuns worldwide.

The Geshema degree in Buddhism is equal to a PhD, but much more rigorous since it requires at least 21 years of study of the five main Buddhist texts, combined with a regular session of prayers and recitations.

“We used to just repeat whatever we were taught like puppets, having no idea what to do next,” admitted senior nun Chosang Palmo, “but now I have my own ambition, which is so motivating.” The nun is finishing her studies in 2017 and begins four-years of exams to qualify for the Geshema degree in India. 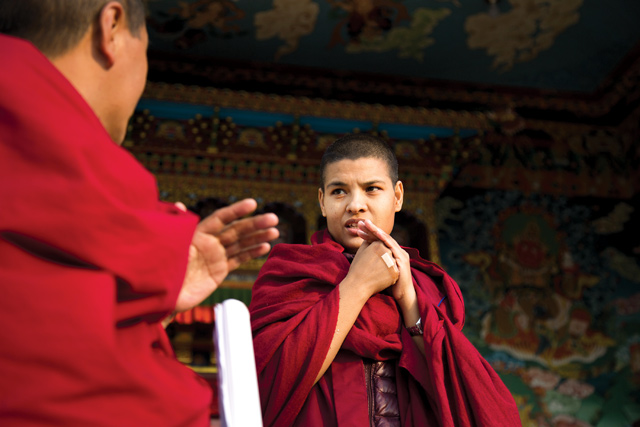 Chosang Palmo is taking some working details with a monk at Kopan Nunnery.

With this degree, nuns are able to acquire higher positions like leadership roles in monastic and lay communities, as well as being qualified to teach Buddhism. The Venerable Jangchub Gyalmo is one of the Nepali nuns who received the Geshema degree last month, and plans to go to Chumchet in Tsum Valley.

In the past, nuns were not encouraged to become geshes and, unlike monks, were not allowed to take the exam. According to Chosang, this may result from the tradition of Tibetan Buddhism that only monks can learn philosophy, the main subject for the Geshema degree.

This gender discrimination ended in 2012 when the Sikyong of Tibet, Lobsang Sangay, expressed strong support to open the exam for nuns. “It is not only about honor, but also about equality,” Chosang added. “Everyone wants to be the best. We study the same thing as monks, but why cannot we take the same exam as them?”

Eight years ago, the world’s first order of kung fu nuns graduated from Druk Amitabha in Kathmandu, breaking from tradition to get training in kung fu, and making themselves equally eligible as monks on physical training. 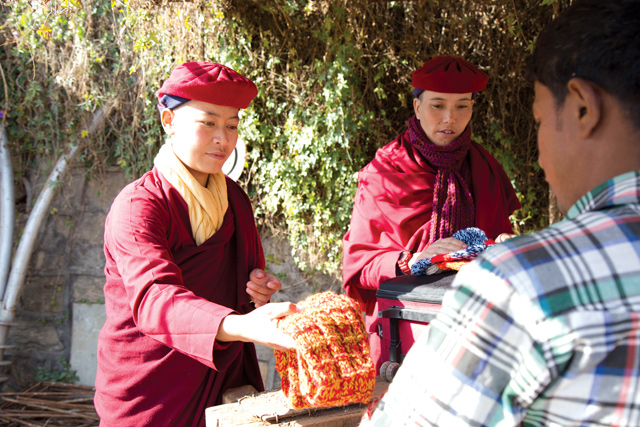 Nuns at Druk Amitabha Mountain are distributing warm hats and scarfs to their reconstruction workers. Training in kung fu has made the nuns strong enough to carry out earthquake relief.

“Kung fu offers us an opportunity to learn what only monks could do in the past, which let me feel a real fairness and equality,” said Jigme Wangchuk Lhamo, an 18-year-old nun from Bhutan.

All that changed with the head of the 1,000-year-old Drukpa lineage, His Holiness The Gyalwang Drukpa. He introduced the kung fu idea from Vietnam where nuns are trained in martial arts for self defence.

Three days after the earthquake, 350 nuns were divided up into smaller groups to rush to remote villages out of reach of the government. One group with 80 people went to the worst affected and roadless parts of the Nepal-China border.

The nuns had to walk, carrying heavy relief supplies on their backs. The hard physical work also included moving broken furniture, fixing roofs and lifting stones, and the nuns worked for 16 hours a day.

“We would not have been strong enough had it not been for kung fu practice,” said senior nun Jigme Yudoon Lhawo. “We stay fit so we were determined to do something for others, kung fu not only keeps our body strong, but also keeps our minds.”

In addition to kung fu, nuns also learn the skills that men do: plumbing, electrical fitting, computers, riding bicycles, the English language and, of course, praying.

Now, monks at Nepal’s monasteries are feeling the pressure. “This gives us a push,” said Loseng Lourdup, a 31-year-old monk at Kopan. “But this makes us work harder, and do more good things for sentient beings together.”

Monks and nuns to the rescue, Karma Gurung

"Was all of this worth my pain?"

Just as well were not going for elections anytime soon
CK LAL
Wow! It namely likewise fine treatise about JavaScript, babyliss pro curler I dissimilar Your post doesn't acquaint any sense. ray ban outlet uk if information are defined surrounded sketches one can effortlessly be versed with these. hollister sale I think a visualized exhibit can be better subsequently simply a effortless text, chanel espadrilles for sale that why it gives you improved quality. getnjloan.com Can you amuse forward me the code for this script alternatively interest distinguish me surrounded detail among relation apt this script? Vivienne Westwood online get a babyliss perfect curl Very soon this network sheet longing be outstanding among all blog viewers, isabel marant sneakers saleI too prefer Flash,